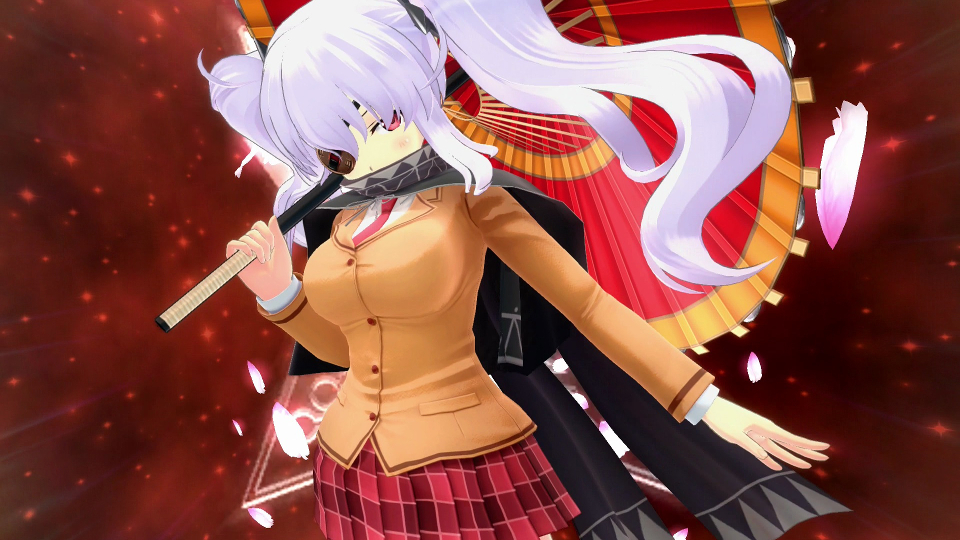 While I knew there was a TV show and a couple of games, I’d never touched the series, this served as a great starting point as this title is a remake of the original 3DS release. You play as a selection of the young ladies of Hanzo Academy. The hustle and bustle of the busy school is unaware that certain ladies are training in the art of ninjitsu. The bulk of the early story has you running small errands and training as you make friends with your classmates but it doesn’t take long for the real plot to kick in. Hanzo Academy isn’t the only ninja school and the girls of the evil Hebijo Academy are determined to steal the powerful scroll of Hanzo Academy.

This is pretty much the entire plot. The first few missions explain who you are playing as by having the characters hang out and spar with one another. When the villains come in, it becomes a tale of personality clashes and while basic, is interesting enough. The story is told in a few different ways with the first being a fantastic animated FMV, before the typical text box style. There are also visual novel style plot dumps that seem to go on for far too long and at times can be about something irrelevant to the plot and kill the pace. While the story is not as deep and exciting as it thinks it is, it does a serviceable job with its characters, though anyone who played any other anime style games, like Persona, will find it a little weak. The biggest mistake was with the final boss, the penultimate boss was a fun battle between rivals but then carries onto a battle with a big monster which, to me, destroys the theme of the whole game when I already had a satisfying ending. When this mode is complete you then unlock the Hebijo campaign, which is pretty much a retread of the Hanzo campaign.

Senran Kagura: Burst Re:Newal plays as a hack and slash brawler. I love Dynasty Warriors, I love Devil May Cry and I love PlatinumGames so let’s see how it stacks up. It’s a simple combo based button basher like Dynasty Warriors, alternating light and heavy attacks. Once you finish a combo, you can then do a dash attack to bring enemies into the air then carry on with an air combo. This is your bread and butter and can destroy groups of enemies or bosses with relative ease. A “Burst Mode” and transformation feature round out your repertoire, giving you a lot of options to defeat enemies. The combat is really fun, for a short while. Once you’ve mastered your combo, the game is a cakewalk. Higher difficulties will kill you quickly but you should be able to race through levels easily. There is a basic levelling system that increases your move-list and allows you to change style but there doesn’t seem to be a big jump in power.

Something to note is Senran Kagura’s heavy use of fan-service. Fan-service, for those uninitiated, is basically using overt sexuality as a plot device or visual feature. Every character wears skimpy clothing that shows underwear and every enemy in the game loses clothes as you fight them. There is very little nudity but it constantly skirts the line. You can dress up your characters with a variety of clothing and accessories, though there are no stat changes. The oddest feature is the “Intimacy” mode. You select a character and use virtual hands to grab…….well you can guess. There doesn’t seem to be any gameplay benefit to this and this feature is not available on the PS4 release.

View some Senran Kagura: Burst Re:Newal screenshots in our gallery:

Visually, the character models are excellent but the backgrounds are generally very basic. The strongest part of the presentation is its soundtrack, anyone who’s played this style of game can hear the riffing guitars with classic Japanese instruments thrown into the mix. It’s fun and keeps you excited level to level. The penultimate battle has a great track that fits the anime style perfectly. Oddly, there is no option to access graphic settings until you finish the tutorial and hit the menu. From there bumping the game up to 4K and setting everything to ultra really helped the presentation, smoothing out bad anti-aliasing. Also, the game performs flawlessly, I didn’t notice a single frame drop even in the most intense of fights.

Overall, I enjoyed this more than I thought I would. It’s a pretty average anime story but even then, it’s good enough to get you going to the next level. The combat does lose it’s charm later in its 6 hour campaign but when it’s good, it’s very flashy and fluid. I wish the levels were a little bigger and there was a deeper levelling system but what you get is good enough. The heavy use of fan-service is just a staple of this genre which I’m used to but there are many who aren’t and this could put people off. There is only Japanese voice acting and while it’s great, there are many high pitched screams that grate on the ears after a while. Those looking for a deep action game might not find what they are looking for but those looking a flashy brawler with cute anime waifus and bouncy boobs, this game is for you.

In this article:PC, Senran Kagura, Steam