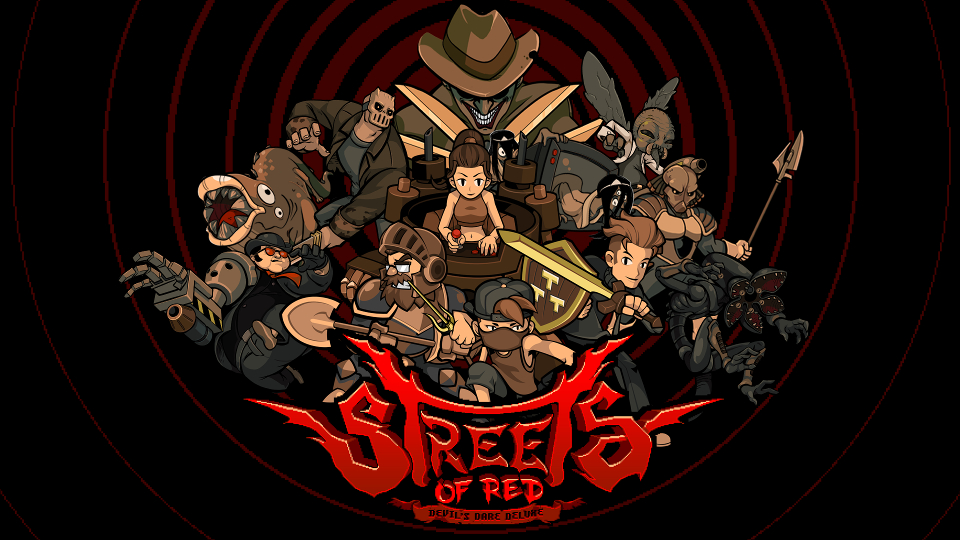 The thinking person’s beat ’em up, Secret Base and Ratloop Asia give us Streets of Red: Devil’s Dare Deluxe complete with added layers of depth to the genre that bestowed upon us some of the greats. A horror twist for good measure; you’ll be leaving a trail of red in your path as you brutally fight your way from one side of the screen to the other.

Streets of Red: Devil’s Dare Deluxe has so many nods to games of the past, that it’s hard to see where the modern begins and the retro ends. When answering the question ‘how does it feel though?’, Streets of Red answers with assurance that this is, in fact, a modern title. The mechanics are smooth, balanced and well placed to where some of these things might have not been the case back in the day. As for the nods, you’ll have a burly male version of Navi from Legend of Zelda helping you, level introduction screens straight out of Sonic the Hedgehog’s playbook and a stripping after a good flogging courtesy of Ghosts ‘n Goblins.

Combat is particularly straightforward at first, with the default moves being enough to dip a toe in. Adding in complexity is the special moveset to which you’re meant to use quite liberally with a meter that continuously fills up to ensure that you do so. It’s very much the salt and pepper of your violent plow through; learning these special moves might pose a little curve, but unless you pick up a thing or two with it, staying with the default hack and slash might hinder your success rate as you progress with stronger enemies.

There’s nothing too complicated overall with the concept of Streets of Red. From the story to the bashing of every undead skull that comes your way, it sometimes feels like you’re just going through the motions to get to the end. After properly mastering your specials, (which differ character to character, but execute the same) the game’s difficultly becomes much more manageable and not at all impossible to get through. Luckily, if you find yourself not having any proper challenge, you can bump it up one to expert and really try the hat on for size.

View some Streets of Red: Devil’s Dare Deluxe screenshots in our gallery:

Game overs are a brutal ending in Streets of Red, with the whole of your progress file vanishing if you fail one too many times. You can buy your way back in to the action on a surface level with the coins you pick up from dropping bodies…but bite the dust too much and you’ll have to hang it up for good. Interestingly enough, you do have an option out of this: the Soul Token–which will bring you back from the ‘perma’ dead. It’s punishing, but in my opinion pretty fair, and a great incentive to smarten up your moves and strategy.

It can be a bit frustrating in the beginning, especially alone, but getting in to the groove and playing with a partner is really what makes Streets of Red: Devil’s Dare Deluxe a treat. It’s not impossible to conquer in any sense of the word and I highly recommend if you’re looking for a game that gives all your mates a controller in their hand. Reaching a victory together with this one will prove to be a satisfying feat!

Streets of Red: Devil’s Dare Deluxe was reviewed using a digital code supplied by the publisher.

In this article:PC, Steam, Streets of Red