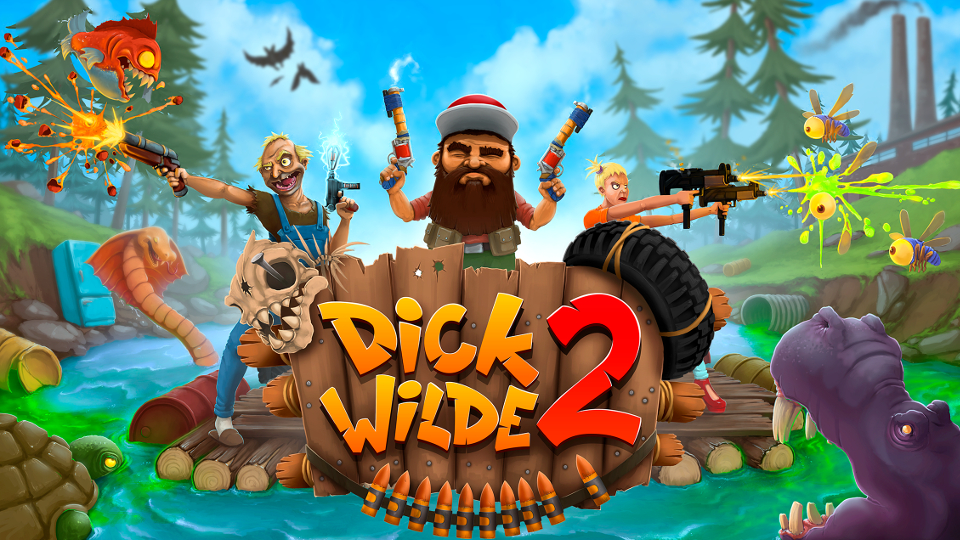 I love VR almost as much as I hate it. As a medium it has massive potential to be completely revolutionary and there are some excellent examples of this already. The reason I hate VR is because developers aren’t putting the effort in and those that do find themselves falling into obscurity as the devices fail to sell. Back to what I love about VR, even mediocre titles are a little more engaging as soon as you don the helmet. Dick Wilde 2 is the sequel to 2017’s on-rails shooter Dick Wilde. As it’s a sequel for a VR title, it must be great, right?

There’s not much story in Dick Wilde 2 so let’s skip right to the gameplay. It’s an on-rails shooter, set in the bayou of Southern USA. You are on a raft and have to get from one section of the river to the next by shooting the creatures and obstacles in your way. As the raft travels downstream, you have no control over it, so all you have to do is focus on what’s in front of you. Barrels and driftwood are abundant and shooting them nets you cash but there are plenty of swamp dwelling creatures determined to make you lunch. Shooting them doesn’t net you money but keeps you alive long enough to hit the next checkpoint. At said checkpoint you have a chance to spend your cash on health, temporary upgrades and weapons before you move on. At certain intervals you can choose which way to go and you’ll head down a different path but you’ll always converge at the same point.

The most vital part of an on-rails game is the shooting and Dick Wilde 2 does a commendable job here. The bulk of the weapons are pretty standard but later on you gain access to a varied arsenal of crazy weapons. I say the game does a commendable job because I did have issues with hit detection on enemies. I won’t claim to be an expert marksman but I could tell when my hits weren’t registering properly and a quick trip onto other on-rails shooters confirmed my suspicions. VR is a bit tricky when it comes to issues like this as it can depend on how you have set your system up so I’m willing to let it slide. For clarity, this was with dual Move controllers and I can see any issues being cleared up with the excellent Aim controller.

The reason why this is an issue comes into what I liked about the game. Dick Wilde 2 is a pretty tough game. It’s gentle at the start but the challenge ramps up massively and it becomes a personal mission to get to the end. I was a little underwhelmed early on but I perked up as soon as the difficulty increased and found myself ducking and firing like a madman. As far as the levels go, I was a little disappointed, there isn’t much else to do other than shoot. There’s nothing really driving you forward, nothing to test you and nothing to impress you or make you excited. Co-op is available in this sequel, though I didn’t get a chance to test it out.

View some Dick Wilde 2 screenshots in our gallery:

Visually, Dick Wilde 2 is nothing to write home about. The levels are incredibly bare bones and it sits at the lower end of VR visuals. It does have excellent room scaling though, something some VR games fail to achieve. The levels are drab and the colour space isn’t exactly exciting either, not even the so-so particle effects elevate the game. The soundtrack is completely forgettable as well, it’s what you’d expect from an Xbox Live Arcade game or something. This is also true of the voice acting, it’s a pretty pants attempt at Duck Dynasty and the jokes were all misses to me. On a presentation front, I can’t give it any good marks.

Dick Wilde 2 is missing personalty. It needed to have some intro sequences to its levels and maybe things going on in the background. That is the kind of thing that separates a great on-rails shooter from an average one. There’s nothing memorable about the game and it’s visually very flat. As a shooter though, it all comes down to a simple question. Is it fun? The quick answer to that is, yes. It is fun, provided you want a challenge and don’t care about the overall package. If you’re looking for something a bit more fully fledged then there are better titles out there like Until Dawn: Rush of Blood and Superhot VR but at the end of the day Dick Wilde 2 succeeds in its mission to deliver a fun shooter, though just barely.

Dick Wilde 2 was reviewed using a digital code supplied by the publisher.