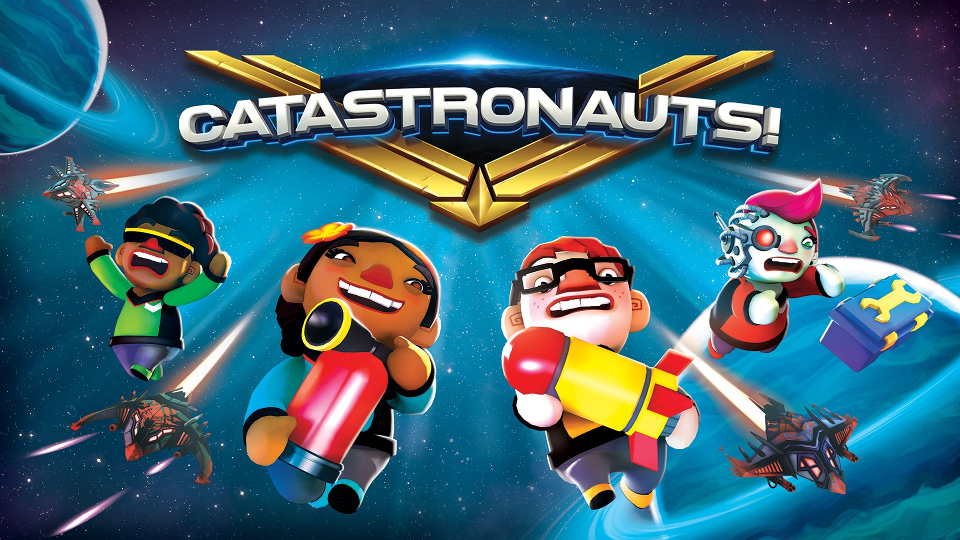 My crewmates and I are aboard a spaceship that is hurtling through space. We’re under attack by an enemy craft and frantically screaming at each other as we try to fight back. We’re taking heavy damage, stuff is breaking and pretty much everything is on fire. Welcome to Catastronauts!

Catastronauts is a party game for 1-4 players who each take the roles of the Space Fleet crew. It’s most similar to the fantastic Overcooked games but in space without the cooking. Instead you’ll be working together to keep your spaceship in tip-top shape while also returning fire on your aggressors. The aim is to keep your ship maintained well enough that you destroy the enemy before they destroy you.

Early on the game starts off rather simple as you learn the ropes. You’ll be inhabiting the same area of your spaceship with your fellow crew and have to accomplish tasks between yourselves. Initially you’re looking for someone to press a button to return fire each time your lasers charge. There’s also a toolbox to collect to repair damage. If you don’t repair damage fast enough then a fire will break out. You need to grab a fire extinguisher to quickly put it out or it will spread.

This is all fairly simple stuff and accomplishing it requires the analogue stick to move and button presses to pick up, drop or use items. While it’s possible to muddle through by doing your own thing it really helps to communicate with your fellow crew.

Communication becomes really important as the game ramps up the difficulty. Later levels split your crew into different parts of the ship. This might mean that players each have their own gun to take care of. The repair kit might be in the back of the ship while the extinguisher is in the front. So you need to make use of teleportation devices to send the items back and forth. Things get frantic when you’ve got a fire spreading through your part of the ship but you have to wait for it to be sent back to you to use it.

Later your lasers are swapped out for missiles which take more effort. Someone has to transport it, then they need to be charged before it can be fired. Other mechanics such as air locks and blast doors are also introduced and each new thing makes everything just that little bit more complicated.

View some Catastronauts screenshots in our gallery:

Catastronauts features a total of 30 levels to complete. These are gated off into groups of five levels and there is a star system to show how well you’ve done on each. The game requires you to at least beat each level in a group before the next group unlocks.

The game is an absolute scream with other players, especially when things go wrong. When you don’t beat a level you can normally pinpoint why and adjust your strategy accordingly. Taking down the enemy craft on the more difficult levels gives you a great sense of achievement. Unfortunately the game loses something when you play solo. It’s just not as much fun and also more difficult.

Catastronauts is easy to learn and hilarious fun. If you’re looking for a party game to play with the family or enjoyed the Overcooked games then you won’t regret adding Catastronauts to your library. Just remember that you need others to play with to get the most out of it.

Catastronauts was reviewed using a digital code supplied by the publisher.