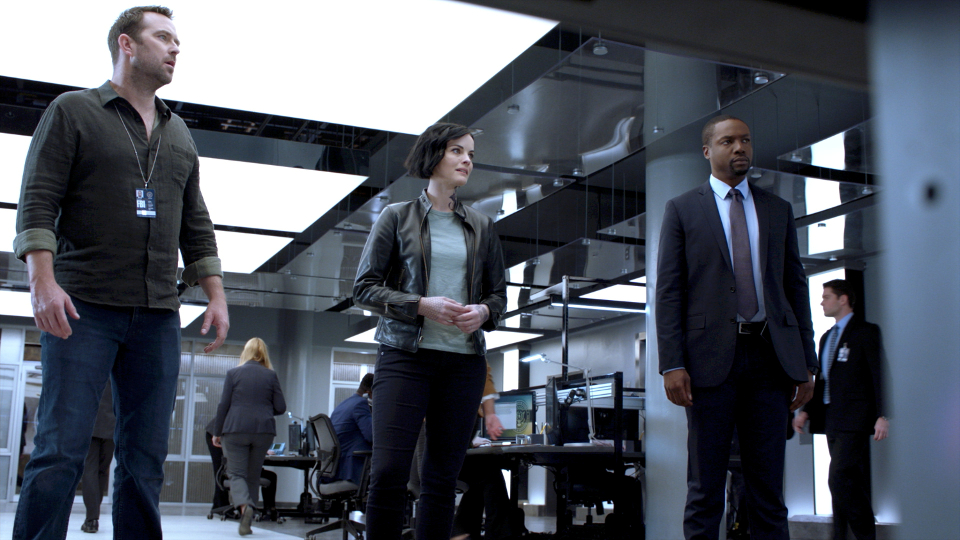 On the latest episode of Blindspot, the team followed a lead to a potential cure for Jane (Jaimie Alexander).

The episode opened up with a flashback to two years earlier. It showed a company called Kearn Pharmaceuticals who were working on a drug named ZIP (the same that is now killing Jane) to help people with neurological diseases. A Dr. Roga went to see her boss to confront him with some worrying information. Despite her calls to cancel the project she had uncovered evidence that some of the drug had been sold. Her boss denied everything and assured her it had all been handled. After she left, her boss made a call to have Roga and her assistant dealt with.

Back in the present, Jane was having headaches from her ZIP poisoning. Weller (Sullivan Stapleton) as ever was concerned but sure they’d find a cure. Patterson (Ashley Johnson) and Rich (Ennis Esmer) called Jane in for results of her recent procedure and told her that she was back to being 100% Jane. However, one outcome was that Jane now also has access to all of Remi’s memories in addition to her own.

Jane remembered that Shepherd had told her that Roman was tracking someone using the codename Kallisto. Patterson and Rich looked into it, solved a bunch of clues and accessed a new data cache. It led them to discover that Dr. Roga had invented ZIP but also that she was dead. They decided to bring her son in for questioning.

Roga’s son was compliant but didn’t seem to know anything. Desperate to save Jane, Weller went in full on bad cop and she had to ask him to cool it. The son’s story didn’t seem to add up when he spoke of his family struggling but he now seemed to be doing well. The team uncovered that he had come into a lot of money that he couldn’t really explain.

Rich and Patterson were able to determine that the money was set up for the son, the day after his mother supposedly died. Surveillance footage showed that she was very much alive and had probably faked her death. With a chance his mother was still alive, Clay agreed to help however he could. Rich accessed his phone records which showed some regular unexplained calls. The son said no one was ever on the line when he answered so Rich and Patterson traced the calls to a remote home.

Overjoyed at the news the son wanted to go with them to see his mother. They said he’d have to stay at the FBI and that he couldn’t tell anyone. He called his fiancée anyway which alerted Kearn Pharmaceuticals who then sent a team to kill Dr. Roga.

The FBI were on the scene first and Jane decided to sit this one out in the van with Rich. Weller and Patterson went to investigate the house and found Dr. Roga who pulled a shotgun on them. After explaining the story she agreed to help and showed them her home lab, which made Patterson insanely jealous.

She explained how she had worked on a cure for Roman and he provided anything she needed. To everyone’s surprise, she had found a cure for the ZIP poisoning and was just waiting for Roman to come and get it. While she’s preparing the cure, the team dispatched from Kearn turned up and opened fire. Roga took a bullet while Weller returned fire. Jane raced to the scene after a pep talk from Rich and took out several attackers.

Unfortunately the bullets damaged the lab equipment and a fire broke out. Weller tried to save the cure but he was too late. The near impossible to find Stanton stem cells that Roga was using were destroyed. Later Roga explained that Roman had located more Stanton cells so there is still hope.

Elsewhere in the episode, Reade (Rob Brown) confronted Zapata (Audrey Esparza). Initially she refused to talk but the pressure began to rise when the CIA wanted to take her. Eventually Zapata said she’d only talk to Keaton but Reade explained he was in a coma. She wouldn’t believe him so took Zapata to see Keaton in hospital.

She finally agreed to talk and explained that she had been working deep cover for the CIA and Keaton was her handler. He was the only one who knew and her mission was to infiltrate HCI Global. She explained she wasn’t allowed to tell the team and that she found her way in via Blake Crawford.

She told him about Madeline killing the board and how she had staged the death of Claudia. Zapata needed to be let free to make the meet with Del Toro. Reade refused to let her go but said he would take over Keaton’s role as her handler. He made it clear that their relationship or chance of a future together was over.

At the end of the episode, Zapata went to the meet with Del Toro. She thought he was early but she was abducted instead. As she was placed in the boot of a car she was told that the CIA wanted a word with her.

Can’t wait for the next episode? Read our Blindspot 4×11 Careless Whisper preview.