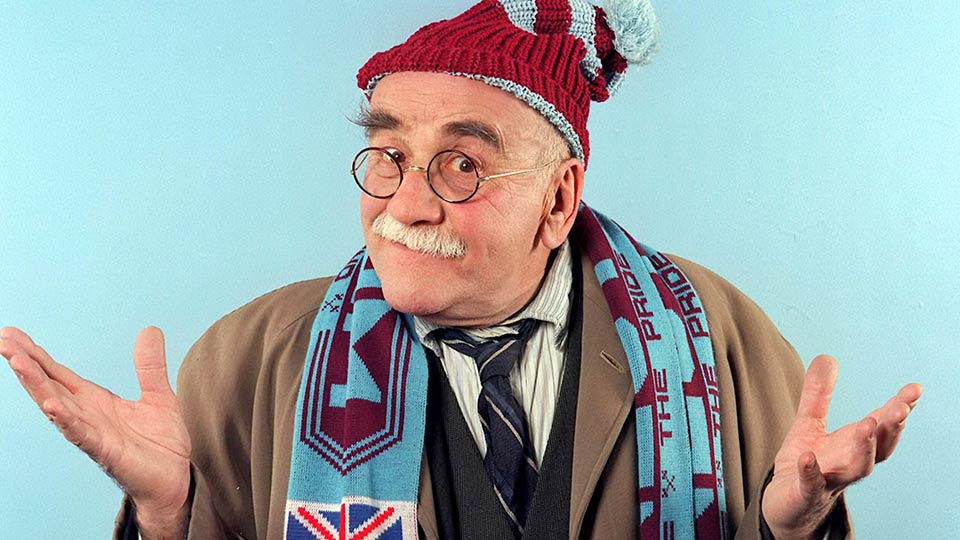 The final appearance of the character of Alf Garnett came with the 1998 series The Thoughts of Chairman Alf. Johnny Speight, who had written the part for Warren Mitchell since Till Death Us Do Part in the 1960s and 70s, and later in Till Death… and In Sickness and in Health, died that year. Touchingly, the first episode is dedicated to his memory. Fittingly, The Thoughts of Chairman Alf sees Speight’s powers of observation and ability to skate the thin ice between offensiveness and satire – and remain upright whilst executing a backward jump – undiminished. The Thoughts of Chairman Alf is a fine tribute to a great writer who created one of the immortal television comic characters.

A Thoughts of Chairman Alf episode had been broadcast at Christmas 1980, and this series resurrected the idea almost two decades later. The concept is that Warren Mitchell, in character as Alf Garnett, appears in front of a live theatre studio audience, who put questions to him. In his responses, he attempts to put the world to rights, and often ends with a music hall song to piano accompaniment. All very charmingly East End. This sets it aside from Till Death Us Do Part, which was a straightforward situation comedy, and gives this series more of a feel of improvised live theatre.

The show was made during the early years of Tony Blair’s premiership, when politics in England had become complacent and, if anything, boring (ah, remember those days?), so the satirical elements are more generalised than they would be now (what would Alf have made of Brexit?) The humour is also safer and more obviously satirical than it was in the 1960s. Warren Mitchell’s age had finally caught up with the character he so famously embodied. Clocking on 70 when The Thoughts of Chairman Alf was filmed, Mitchell had become the bona fide hot-headed pensioner Alf Garnett always aspired to be. His wit and recall is undiminished, though, and this series can be recommended on the strength of Warren Mitchell’s virtuoso performance alone.

The clunkiest aspect of the show is the audience. They throw out questions for Alf in a way that’s meant to appear spontaneous, but ends up seeming anything but. One or two speak for too long as well, believing that they are as much a part of the show as the star. Such moments are cringeworthy, yet Mitchell’s Alf Garnett is pretty good at the put-downs. You wouldn’t get away with it now – but enjoy the days when fat-shaming and other aspects of political correctness could still (just) be broadcast.

In all, there were six twenty-five minute episodes recorded, presumably cut together from a couple of live shows in front of the same audience. Join Alf Garnett for his final entertaining rants, digressions and bouts of verbal Dunkirk spirit. There’ll never be another character like him again, and at least in The Thoughts of Chairman Alf, he went out with a bang. God bless Her Majesty, up the Hammers, etc!

In this article:Alf Garnett, Johnny Speight, The Thoughts of Chairman Alf, Warren Mitchell