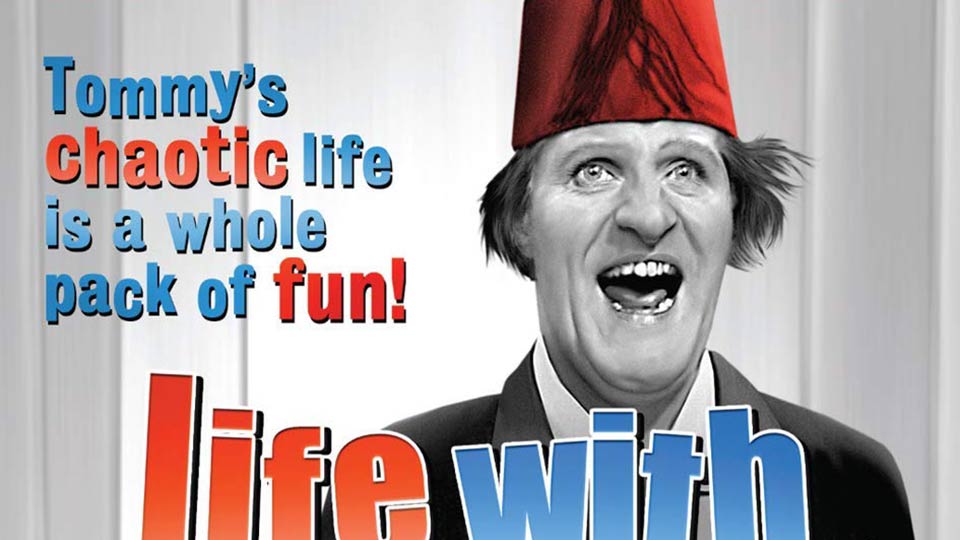 Comedian Tommy Cooper was such a staple on British television that he even died live on air, in 1984, when the show had to cut to an impromptu commercial break. Life with Cooper takes viewers back to close to the start of Tommy Cooper’s television career, to a series that truly established him as one of Britain’s leading entertainers.

Rewind to the late 1960s, where between 1967 and 1969, viewers could tune in to Life With Cooper, a series of sketches linked by Cooper’s performances in front of a live studio audience. There is a commendable range of material. Television cameras go out on location with him for sequences that invariably involve slapstick, and these are played in to the staple magic tricks and appalling jokes he (oh-so-brilliantly!) delivers in the studio, as well as elongated sketches with high-profile guest artists. A satisfying mixture of comedic approaches hold Cooper front and centre, and the twenty-five minute episode format is the right length of time to enjoy the light-hearted magic of Cooper in easily-digestible chunks.

The appeal of Tommy Cooper is something you immediately understand, or never will. Try explaining to somebody not in the know that he’s a comedian who laughs at his own jokes, which are almost always terrible – but there’s a star quality to his delivery that makes him one of the greats – and they may well look at you as if you don’t know the first thing about humour. The writers of Life With Cooper understand that it’s all about the star, and when he’s given great scripts that play to his strengths, Life With Cooper will have you howling with laughter over fifty years after it was recorded. Undeniably, much of the humour is low brow, and punchlines can be seen waving at you from a mile’s distance. Tropes include opportunities for Cooper to trash the set, smashing into the furniture in hotel bedrooms, courts of law, or pretty much anywhere his large feet or forehead can demolish walls and prop furniture. There isn’t a single sophisticated moment on any of the sixteen episodes spread over three discs. Set-ups and punchlines are on the nose. Classic reversals abound. Life With Cooper is not the place to find clever comedy: but the show to revel in familiarity and silliness.

Life With Cooper can be commended for attracting the talents of some top notch guest artists, some of whom remain household names to this day. Recently-deceased national treasure June Whitfield plays a seductive neighbour with a jealous husband. Warren Mitchell (Till Death Us Do Part) is magnificent as a dodgy second-hand car salesman. Bill Oddie (The Goodies) makes a brief appearance as a police officer. Kenneth Cope (Randall and Hopkirk Deceased) helps Cooper settle in to a stint washing dishes at a posh restaurant, and Henry McGee (Rising Damp and many others) is in characteristically supercilious mode in the opening episode.

The most successful instalments contain an overarching story, such as when Cooper is unable to claim his luggage at the railway station because he doesn’t have any cash, so he tries to get some by taking a meal at a restaurant. It helps that it is written by Brian Cooke and Johnnie Mortimer, a successful partnership that produced some of the great British situation comedies of the 1970s, notably Man About the House. The episodes that head from sketch to sketch without anything tangible to hold onto are rather more disjointed.

As Life With Cooper is archive television, the sound and picture quality of the black and white recordings is highly variable. The final three episodes are much sharper in resolution than the others. There is an off-air recording of an entire episode on the second disc, where the audio-visual quality is especially poor, but this is partially made up for by retaining the original advertisements that ran during the commercial break, which offer an interesting insight into the domestic aspirations of Brits in the late 1960s. For the other episodes, ident cards have been cut, so they run straight through.

An interesting extra feature is the only known surviving episode of Cooperama, an earlier 1967 series that was a vehicle for the comedian. It notably features Alfie Bass and Derek Bond.

Overall, there’s a lot to enjoy in Life With Cooper, not least the performance of the star himself. If you’re already a fan, you’ll love seeing Tommy Cooper in his own sketch show. If you adore archive British TV and venerate the performers from the golden age, then you won’t want to miss this title either. Life With Cooper won’t cut it with the sophisticates, but as a good example of 1960s light entertainment, it delivers.