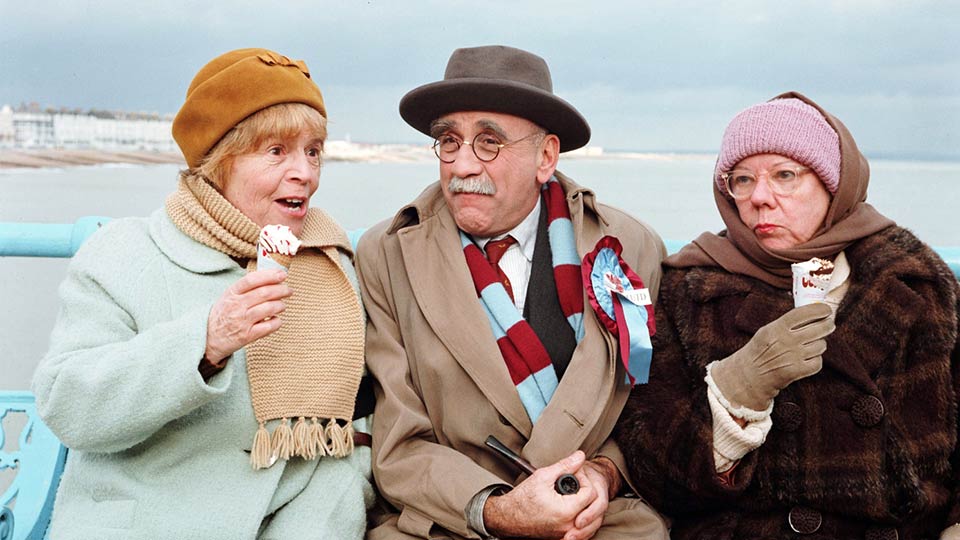 Six years after Till Death Us Do Part, and four years before the sequel In Sickness and in Health, Alf Garnett was resurrected for the short-lived Till Death… The title had been truncated, and the action had transferred from the East End to Eastbourne. The show had also moved from the BBC to ITV.

Till Death… hit British television screens in 1981. In the intervening decades, it has largely been forgotten. Six twenty-five minute episodes were made, making it a short-lived return for everyone’s favourite ranting and opinionated pensioner. Although it reunited Warren Mitchell with Dandy Nichols (as Alf and Else Garnett) there is no sign of ‘scouse git’ Anthony Booth as son-in-law Mike. Una Stubbs makes appearances as daughter Rita, though the main supporting part goes to Patricia Hayes, who reprises her role as Min Reed from the earlier series. With her husband now deceased, former neighbour Min now lives with Alf and Else as a lodger in their bungalow by the sea.

There is substantial use of location filming in and around Eastbourne. The series is shot on colour videotape which gives it a low-budget but accessible feel. Where the conflict from son-in-law Mike has been removed, it is replaced by the collaboration between Else and Min who act as a unified force in frustrating Alf. Less satisfactorily, Alf’s punk grandson, played by John Fowler from Scum, is introduced in the second episode.

Overall, there’s a nagging feeling that Till Death… doesn’t raise as many laughs as it should, and that there’s probably good reason that it didn’t last long and has been largely forgotten. Having said that, the main cast is excellent. Warren Mitchell and Dandy Nichols slip back into their familiar characters with seeming effortlessness, and Patricia Hayes adds a lot as Min. She was a hugely-experienced comedy actor, having appeared in The Ken Dodd Show, The Benny Hill Show, Hugh and I (with Hugh Lloyd), The Arthur Haynes Show and The Arthur Askey Show to name but a few. The lead cast bring the best out of the scripts, which are genuine Johnny Speight offerings. However, the lasting impression is that the set is a rare misfire from the pen of Speight, but the talented cast do their best with it.

That’s not to say that there’s nothing to enjoy in Till Death… Moments such as Alf Garnett begging punks not to beat him up, and then calling them cowards when they leave him; and later embarrassing Else as they order drinks at an expensive hotel are reminders of why the characters have endured in the British psyche. But they are a little too few and far between. The situations aren’t especially memorable, and the attempt to be topical (with references to high unemployment rates two years into Margaret Thatcher’s premiership) are clunkily handled. Even worse, Alf Garnett comes across as bitter and sometimes even cruel. He has lost his romantic hankering after a bygone golden age. The final episode even teases the audience that Alf may die, as excessive alcohol consumption impacts upon his liver. We leave him in a state of sad self-pity. This is not vintage Alf Garnett.

An extra feature on the disc is Chairman Alf at Christmas, which was made in 1980. It features Warren Mitchell addressing a live audience in character as Alf Garnett, and the concept was, almost two decades later, resurrected successfully. Certainly, contemporary audiences wouldn’t laugh uproariously at the politically-incorrect race-related humour, but there’s probably more laughs in that half hour than across the six episodes of Till Death…

Fans of Till Death Us Do Part may end up a little disappointed by Till Death…, which definitely isn’t how they would choose to think of the immortal Alf Garnett. However, for completists and those interested in forgotten television curiosities, Till Death… is worth a look.