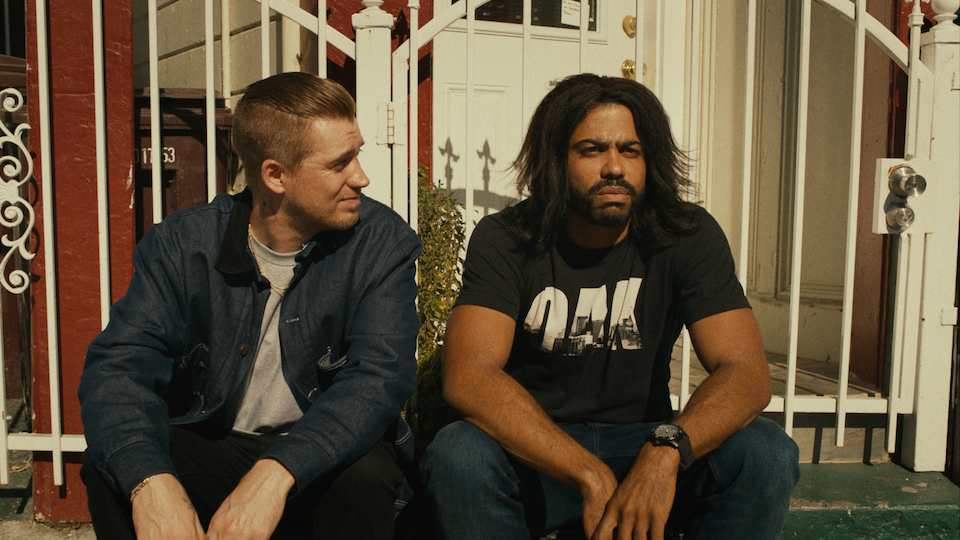 Reminiscent of early Spike Lee joints, and packing as equally powerful a punch as Jordan Peele’s Get Out, Blindspotting is an essential film for America right now. Written, produced by, and starring Daveed Diggs and Rafael Casal, Blindspotting tells the story of lifelong friends Collin (Diggs) and Miles (Casal) over the course of a few days that will change their lives forever.

After a brief stint in jail, Collin is now into the final three days of his probation. He just wants to stay out of trouble, whilst the unpredictable Miles can’t seem to avoid it. When Collin witnesses a fatal shooting of a black man by a white cop, everything changes around them, and he and Miles are forced to confront some difficult truths about their friendship.

It’s worth noting however, that this is not some angry polemic of a film. Yes there’s anger and politics coursing through it, but it’s an issue film delivered by stealth. There are all sorts of societal ills being subtly tackled throughout Blindspotting, but they are kept under the radar by the smart humour and snappy dialogue.

From gun control, police brutality, urban gentrification and cultural appropriation, to white privilege and racial identity, Blindspotting offers truly unique perspectives on all these hot button topics, whilst still being a hilarious and knockabout buddy comedy at its heart. But when it switches gears, it does so with some serious clout. There is a scene late on this film that features one of the most powerful and profound images I have seen in a film in a very long time.

Blindspotting is an extremely stylish and confident debut film from music video director Carlos López Estrada. There’s a real urgency and vibrancy to the visual style. It’s an ambitious film, and willing to take stylistic risks that really pay off, whether they be dream sequences, or the brilliant mix of hip-hop free-styling, and spoken word that slips into the dialogue. Diggs and Casal are wonderful poets, and their writing is perfectly structured and razor sharp.

Amongst everything else going on in the film, it is also a love letter to Oakland, a city being changed beyond recognition by the unstoppable onslaught of gentrification. Miles, who is a tough, tattooed, grill-wearing white guy who grew up in the ‘hood, is terrified of being mistaken for one of the many hipsters that now live in Oakland and look exactly like him.

This is a fantastic and insightful piece of writing, and an incredibly sharp take on cultural appropriation, played brilliantly by Rafael Casal. But a fear Miles has never had to live with, is the fear of being shot by a cop. That is the reality of life for Collin. Diggs plays Collin as a soft-spoken and calm man, who is both haunted by what he saw that cop do, and terrified that as a black man in America, this is his reality. Miles can buy a gun from a street dealer and wave it around like a toy. This is a privilege Collin will never have.

Blindspotting is a film that can make you laugh and then stop you dead in your tracks in the exact same moment. There’s a scene with an educational pamphlet, giving advice on how to have “The Talk’ with your kids. But it’s not about sex. It’s about talking to your kids about the police. It’s such an insane thing it makes you laugh. But this is reality in America. Where a mom has to teach her kid from a very young age to raise their hands and shout “don’t shoot don’t shoot.” If there’s a more devastating indictment of modern America in contemporary cinema, I am yet to see it.

The bonus content on the blu-ray disc is well worth your time. There are two feature length commentaries, the first with director Carlos López Estrada, and the second with Daveed Diggs and Rafael Casal. Next up on the disc is Straight from the Town – a 25-minute behind the scenes documentary, all about the making of the film, with lots of really interesting background info about the project and the artists.

There’s also a video diary made by the director on his phone, with plenty of great behind the scenes footage. Finally there is six-minutes of deleted scenes, including one long freestyle by Diggs and Casal as they drive around, which is amazing. I can see why they cut it, because it’s a really long scene, but it’s brilliant, and I’m glad it made it onto the disc.