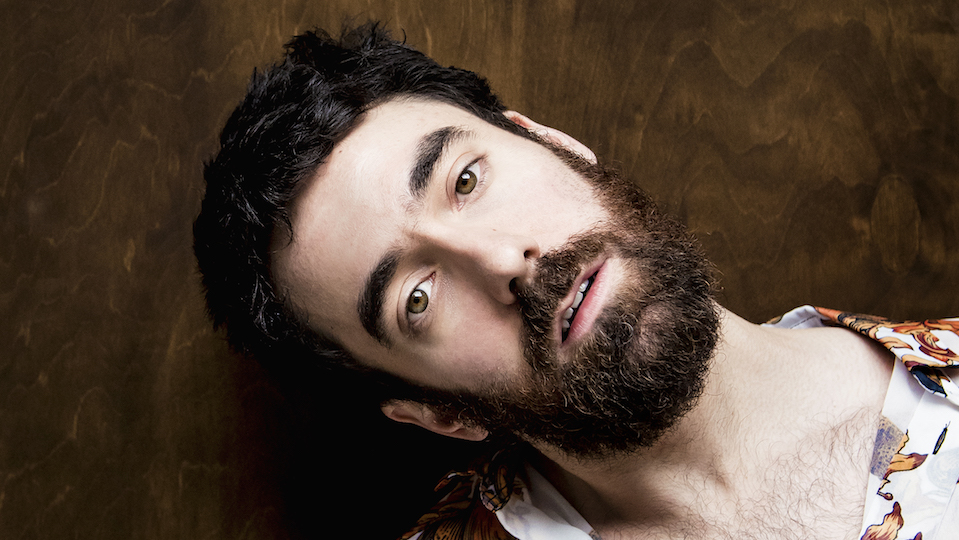 After facing financial difficulties (following some poor life choices, ahem, Bitcoin investments) in recent years, Hess returned to live with his parents. Don’t worry, Seahorse isn’t filled with lame ‘bank of mum and dad’ generation jokes. It’s a snapshot of Hess’ childhood and his chance to relive it – whether he enjoys it or not. We’re sucked into all the little foibles his parents continue to inflict upon him. They’re not all endearing! Hess remorselessly mocks his parents in return for big laughs.

We get a flavour of Hess’ childlike approach and joy in witnessing life as he sees it. While the ideas are somewhat haphazardly presented, Hess delivers a sublimely humorous take on the absurdities of normality. At regular intervals our attention is split between Hess and a screen. We view his top notch graphic design skills, video of him as a seemingly bi-curious toddler, a beloved framed photo of him in a swimming pool beside two strangers and numerous other silly shots. Considering Seahorse is Hess’ fourth solo show following an Edinburgh run, there’s very little narrative. Rather, it’s presented like a series of funny ‘brain farts’ that Hess has clearly been brewing a while. You’ll be glad he lets rip! Especially when Hess moves out of his parents’ house and into an anecdote describing – in intimate detail – his current male housemate’s bedroom, er, habits. Rarely have I seen a masturbation gag metaphorically climax to such satisfying heights of hysteria.

Hess has immense potential if he further develops his fresh, frivolous perspective with a delicious dollop of daft on the side. Who indeed – if familiar with the work of Beatrix Potter – can meet someone named Jemima and not immediately think ‘Puddle-Duck’? The difference with Hess – or at least stage-persona-Hess – is that he’ll say it. He’s worked in retail jobs, he’s commuted, he’s got white male privilege. He’s studied nuances in human behaviour and – crucially – the subtleties that unite us all. The common facial expressions that summarise minor British embarrassments will leave you howling. Awkward recognition in which the audience can revel as Hess builds towards a cringeworthy crescendo.

Incidentally, while he laments on the fact you can never be sure if you’ve seen the exact same pigeon twice, seahorses aren’t mentioned once. Seahorse is a title presumably plucked at random from the treasure trove of oddities that is Hess’s mind – and I mean that as a sincere compliment. Hess has an instinct for comedy, his brain whirs at top speed delivering whimsical witticisms one minute and downright dirt the next. For a while we’re fooled into believing he’s rambling without purpose but the gags come thick and fast. Don’t lose concentration for a moment. Hess barely pauses for breath – and you’ll have little time to catch yours as the laughter takes hold.

In this article:Adam Hess, Soho Theatre