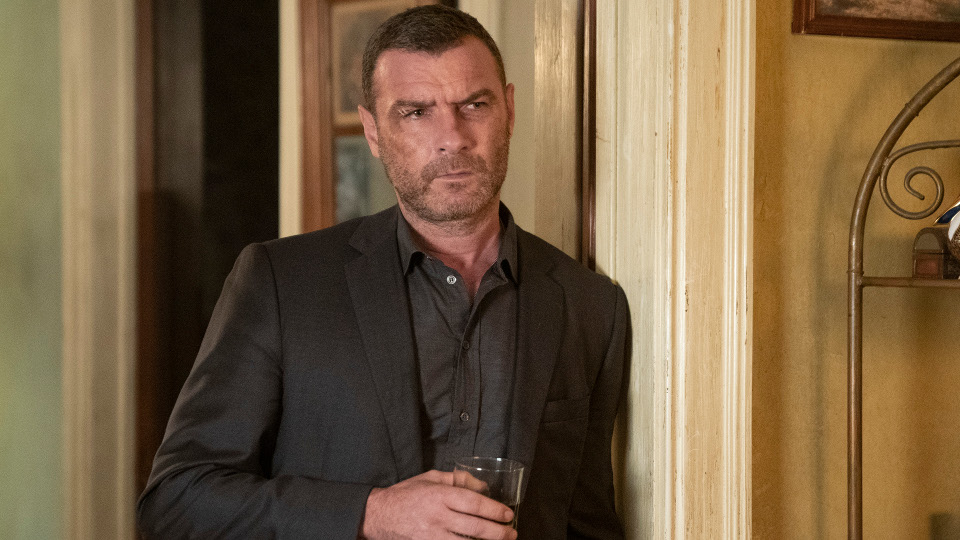 In the season 6 finale of Ray Donovan, Ray (Liev Schrieber) tidied up some loose ends.

The episode began with single shot showing a hive of activity at Aunt Sandy’s place. As Sandy (Sandy Martin) sat smoking on the porch, Mickey (Jon Voigt) and Daryll (Pooch Hall) got to work on digging a grave for the cops they killed last episode. Smitty (Graham Rogers) felt out of place as the Donovan’s got on with the task at hand.

Inside the house was a bath full of blood where they had presumably drained the corpses. A panicked Smitty looked around for something to do to help. Mickey seemed worried about Smitty so tried to keep him busy. Smitty went into the garage to see if he could help in there and witnessed Sandy using a chainsaw to remove Rad’s (Tony Curran) head. Instead of helping he went back outside to vomit.

Bridget (Kerris Dorsey) seemed to have finally accepted her family and was unusually calm with everything going on. She’d made sandwiches for everyone and gave them out. She then went into the garage and got busy with the chainsaw herself.

Mickey was interrupted by a call from Ray who wanted to know if his father ever loved his mother. Mickey said that of course he did. Ray accused Mickey of never being there enough for them as kids. Mickey was upset at this and said he was there enough.

While the family finished up their business, Ray set about tying up all the loose ends. He attended Justine’s viewing and found no one else was there. Lena (Katherine Moennig) waited outside until Ray had gone before heading in herself.

Ray’s next stop was to see Sam Winslow (Susan Sarandon). Security let him in and Vinny (Chance Kelly) took the lift with him. When the doors opened Vinny was unconscious on the floor and covered in blood. Ray walked in to see Sam and she noticed he was wearing black gloves. She promised Ray anything he wanted but we didn’t get to see what happened next.

Back at Aunt Sandy’s, Terry (Eddie Marsan) turned up and couldn’t believe what he was seeing. He was there to take Mickey back to the FBI in exchange for Bunchy’s (Dash Mihok) release. Mickey said he would if it came to that but he was sure they’d just lock the pair of them up. He wanted to speak to Ray first. Ray told him to do nothing for the moment.

Back with Ray, we saw him closing the boot of his car. Has he killed someone at Winslow’s? Was he disposing of bodies? It wasn’t clear. He called Lena and told her to come to the location he was sending her. She didn’t want to but did as he requested. When she arrived she had a long rope with her, presumably Ray had told her to bring it. There she found Vinny tied up. He thought she was there to save him and didn’t realise that Lena was the girlfriend of Justine, who he hung in her shower. Instead of freeing him, she put the rope around his neck and jumped out of a window holding the other end. She hurt her hands but left Vinny with a broken neck.

Back at Aunt Sandy’s, Smitty came up with a way to fit in more. He grabbed a dress from in the house and told Bridget to put it on as they were going to go and get married at City Hall. She agreed and they roped Terry into going along to be their witness. While they waited, Bridget told Terry about Ray’s suicide attempt. When they returned to Sandy’s everyone was fast asleep after their day of crime.

The last thing on Ray’s todo list was to deal with Ferrati (Zach Grenier). Ray went to the bowling alley and took out the guards. Inside he pulled a gun on the mayor but found himself surrounded. Killing him probably meant that he wouldn’t leave alive.

Ferrati was impressed by Ray but also scared for his life. He pleaded that he had nothing to do with Bridget being kidnapped and that the cops acted on their own. He proposed a deal to put the past behind them. For Ray’s part he headed to Novak’s (Lola Glaudini) campaign office and told the reporters outside the truth about recent events. He changed one important detail though to say that the audiotape was fabricated and that Winslow hired him to prevent Ferrati getting re-elected.

In return, Ferrati had Bunchy released. Ray went to pick him up and the pair shared an unexpected embrace in a very touching moment. Ray took him back to Aunt Sandy’s where they were all celebrating. Bunchy went inside and Terry came out to talk to his brother about the suicide attempt.

With the Donovan’s finally all reunited they celebrated by getting drunk and singing songs. The bad news is that it looks like part of the deal still involves Mickey going back to prison. Mickey was still really upset about Ray saying he wasn’t there for them as kids. He recited ‘The Dead’ by James Joyce that he used to read to them. Ray seemed to remember it and realised that maybe his father isn’t quite as bad as they all make out.

At the end of the episode, Ray headed outside. He made a call to Dr. Amiot (Alan Alda) who was happy to hear from him. It seems that Ray has finally accepted that he needs some help and is ready to talk. It began to snow. The final scenes showed Ferrati winning, Vinny dead and Sam Winslow’s lifeless body hanging in her apartment.

Read about the 10 things we want to see from Ray Donovan season 7.

Ray Donovan will return for season 7 on Showtime in the US and on Sky Atlantic in the UK in late 2019.