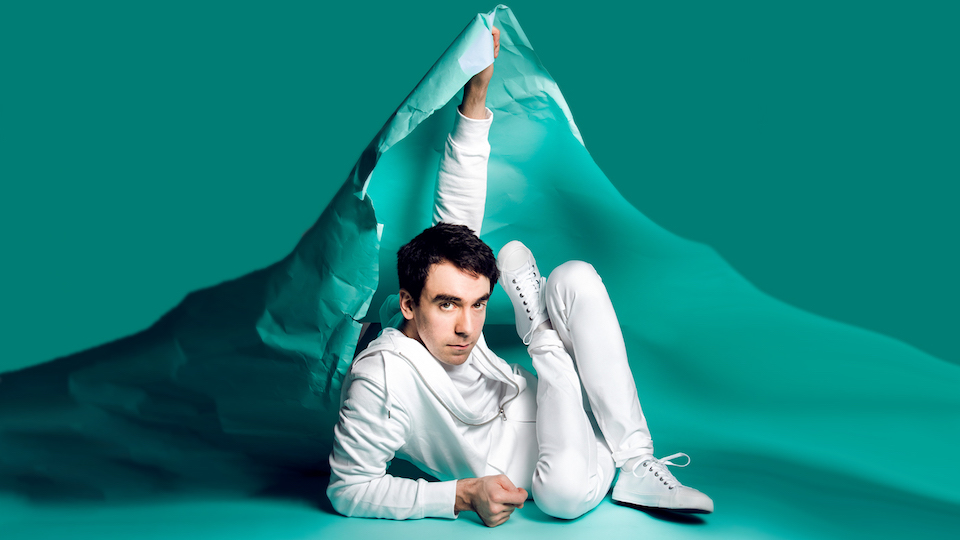 Comedian Adam Hess is known for his incredibly high joke rate. He’s been a gigging stand-up comic for the last eight years, and it was in 2015 Hess’ Edinburgh Festival Fringe show Salmon earned him a Best Newcomer nomination.

In 2018 Hess brought Seahorse to the Edinburgh Festival Fringe in which he loses everything in his life in a matter of days before desperately trying to claw it back. If you missed him in Edinburgh, Hess’ll be bringing Seahorse to audiences for 10 nights at Soho Theatre this month, starting on 15th January.

Recently, Hess spared time from his busy schedule (Bitcoin value won’t check itself each morning!) to chat to Entertainment Focus about his energy on stage, his approach to founding jokes in reality, and how he’d search charity shops for fresh VHS comedy inspiration before YouTube was invented.

How many times have you performed at Soho Theatre now?

This is my fourth run, I think. Yeah, every time I’ve done a solo show at the Edinburgh Festival I’ve done it at the Soho.

It’s a great venue isn’t it?

Yes! I think people who go there don’t mind their comedy being a bit weirder, they’re very open-minded. Some people turn up and have never heard of me but even if I’m being really stupid they’ll listen. I’ve not really done the show since Edinburgh. I’m excited to do it. When you do a show in Edinburgh every day you fall into the same rhythm in a muscle memory way of saying things and go into auto pilot. Now it’ll feel fresh again.

Is there a difference between an Edinburgh audience and elsewhere?

London references work just as well in Edinburgh as they do in London. I keep referring to Clapham Junction as Clappy J’s. But they get it, it’s not even a joke but they get what I’m talking about. What you do notice in different venues is that there’s a difference in what people laugh at. I did the Free Fringe for three years and then The Pleasance which is a paid venue. It’s not that one is better than the other but certain jokes fly more in one venue than another and you can’t predict it. In Edinburgh you may be the 4th show someone’s seen that day and maybe the 20th they’ve seen in total. I’ve noticed people laugh more in London because they’ve not been to shows before that same day.

The energy must be really different in the crowd and for the performer, too.

I’ve never noticed being tired in Edinburgh. On stage, I mean. Socially, my chat becomes weak about two weeks in! On stage it’s weird, even if you’re knackered, you never notice it. If I think I’m really tired I tend to be more energetic when I’m on stage. Then it all hits me when I come off and feel I need to sleep for 54 years. People say I’ve a fast delivery anyway but I genuinely do not see it. I know I’m not Jack Dee in levels of speed but people tell me to slow down and then I try to. Every time I decide I’ll slow down, I find out that I’ve not been slow. I’ll listen back to an audio clip and think ‘that’s slow, isn’t it?’ but apparently not to other people. I think it’s a question of value for money, I pack the jokes in!

Exactly. You don’t deliver the lines so quickly that the audience can’t keep up. The energy’s good.

I’m trying to mask the lack of laughs, I guess. I think to myself if I’m speaking and there’s no gap then no-one will know that there’s no laugh there because there’s a man screaming.

So you’re 30 now, Adam? How old were you when you started?

I started stand up at 22 and in my head I still am. Yes, I’m 30. I’ve become bearded and it’s so sad. I look a lot older. There was something about my eyes, the next morning after turning 30, there’s a weakness in my gaze.

Have you noticed things change on the comedy scene since you started?

I think as time has gone on it’s become increasingly more competitive for newer people. When I started I was lucky because I started in Brighton and the ratio of comedians to places to perform was reasonable enough that you can get a gig every couple of days if you wanted. Whereas in London I found it a lot harder because there’s so many comedians in London. I think a lot more comedians have been created but the number of gigs hasn’t necessarily increased. I’ve not noticed a lot else, though, I’m not very observant in that way.

Did you have a day job that you quit to do stand up full time?

I had a lot of jobs! From the age of about 10 I knew I wanted to be a comedian. I didn’t know what it meant but I knew I wanted to earn a living from it. From age 15 I became weirdly obsessed with writing jokes. To the point where, when I was about 19 I had 1,500 A4 hand-written pages of stand up.

What was your inspiration behind that?

My mum would give me money for the bus home and I’d choose to walk home and use the money in charity shops to buy old VHS tapes of Eddie Izzard or Vic and Bob. There was nothing on the internet before youtube. There was some rubbish but nothing I could really watch. Which is why it was all crap that I was writing. I’ve still got most of those pages and I read over it sometimes, and the earlier stuff is absolute tiffle. The most hack, rubbish stuff. What’s funny though is that every so often there’s a joke in it that I’ll take and use in a current show. There’s jokes I wrote when I was 16/17 that I do still do. But they’re one in 100 pages. I knew I wanted to be a comedian but I was very scared. I started at 22 and I had to subsidise doing it because you have to. I did every job under the sun.

What jobs did you do?

I did medical trials. I could not recommend it more! It was great. It was very boring. I used to work in Curry’s selling vacuums, Boots selling toothbrushes… I’ve had a lot of retail jobs and I was awful at all of them. I used it as a way to observe people. A lot of the stuff in this show actually is about stuff inspired that I noticed about people when I worked in retail. The way people speak to you. It’s not even them being rude. The way their faces change or their voices change when compared with talking to you and then their spouse. I found that so funny. So I got something out of my time in Boots!

Absolutely, drawing on your own experience.

It’s so much harder to write now because I don’t have a life! Honestly! Today I woke up and checked the price of Bitcoin because I find that fascinating. Then I had a protein shake and went to the gym to run 8k while listening to The Handmaid’s Tale audiobook. I’m an efficient man and I like to run and learn at the same time. Running’s great for being funny as well, I’ve noticed. It makes me write a lot better. But today I’m too exhausted to write anything. It’s weird, lots of the funny anecdotes I write come from stuff that happened years ago. More relatable stuff.

You’ve written a fair bit about your family. Did it all genuinely happen?

Pretty much everything is true. Sometimes if three wacky things happened in the space of three years it’s easier to put them into the same anecdote. Yet people don’t believe it. I’ve spoken about my going to Brownies because my mum was Brown Owl. So, the truth is that I went to Rainbow – which is where you go before Brownies – but no-one’s heard of Rainbow so I change that detail but it’s all true. When the time came for me to go to Cubs I was so scared I cried. I told the man that it was due to shrapnel in my leg. People think that’s not true but it absolutely is. When you’re a kid you don’t think it’s weird, you just think it’s what your family’s like. You have to mine what’s noteworthy enough or wacky enough in your childhood to discuss.

Do your family mind, did you ask for their permission to talk about them on stage?

There was one thing I did on telly about my mum posting garbage to companies. She posts like orange peels or apple cores to companies who’ve sent her a leaflet because she’s angry. I didn’t check with her but she found it funny. There’s a couple of things I’ve said. For example, I said my grandad claimed that he was the first person in his town to own a t-shirt. [Laughs] It’s not true at all but it’s funny because someone’s grandad is the first person to wear a t-shirt in their town! Lots of my favourite types of jokes to do are very fantastical. But I find people laugh more when stuff seems grounded in reality. That’s my fault, I think. I need to find a way for people to find it funny when I say really crazy things. Loads of comedians find a way to make an audience go with them into a different universe.

Can we expect a fantastical theme to Seahorse?

No, well, there are little bits within it. There’s a lot of stuff about faces. How we all think we’re unique but we all pull the same faces in certain situations without ever having discussed it. Like the face you pull if someone brushes your shin on the tube while they’re crossing their legs. There’s observational stuff which I try and disguise as anecdotal stuff. There’s a bit about the alphabet that’s quite long about how the second half of the alphabet is naughtier than the first half. I talk about how you agree without knowing it. Who would you rather babysit your child, someone called Bibble or someone called Vuvox? We all know that Bibble would be better behaved than Vuvox because Vuvox is clearly evil. [Laughs] That’s quite fantastical but the show’s mostly anecdotal.

We stopped Adam revealing any more spoilers as Entertainment Focus look forward to reviewing Seahorse later this week during its 10 night run at the Soho Theatre.