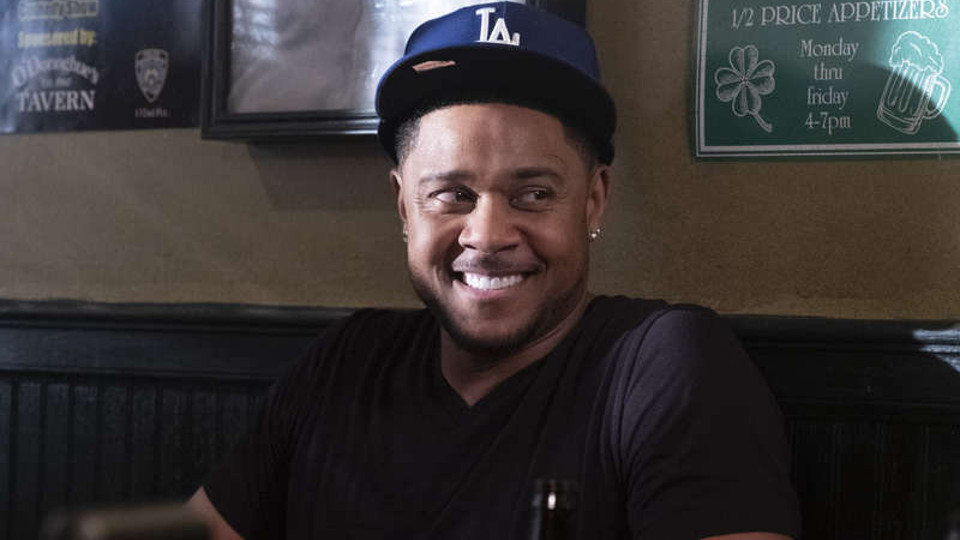 In the latest episode of Ray Donovan, Ray (Liev Schrieber) went on the warpath to try and save his daughter Bridget (Kerris Dorsey).

The episode began with Ray escaping from Rad (Tony Curran) and Danny (Chris Tardio) in dramatic fashion. After they ambushed him and gave him a beating at the end of last episode, Ray literally jumped through a second floor window to get away. After an explosion of glass he hit the ground hard and it took him a few seconds to get up.

As soon as he did he found himself pursued by Rad and Danny. Furious at him escaping they tried to contain the situation by firing their guns at him. Ray managed to stay ahead and climbed over a high wall to freedom. He was hurting from the beating and his escape had left him with a large shard of glass in his shoulder.

Ray found his way to a diner where he asked to use their bathroom. There he cleaned up a little and pulled the glass out of his shoulder. He poured sugar on the wound to help keep it clean and heal. Next he called Winslow (Susan Sarandon) and told her to meet him because he had something she wanted.

Winslow headed to the diner and Ray told her about the corrupt dealings of Ferrati (Zach Grenier). This wasn’t particularly useful to her but the recording he had of Ferrati asking Ray to kill a judge was just what she needed.

Exhausted, Ray headed back to his apartment. As he went to grab a drink he was interrupted by his father who was waiting for him, gun in hand. Mickey (Jon Voigt) demanded his $3 million back but Ray collapsed right there in front of him. A little while later, Ray awoke in bed with his wound dressed. Mickey was sat waiting for him to wake and asked again for his money. Ray told him that he’d given it back and Mickey couldn’t believe it.

Mickey was also still upset at Ray putting him back in prison. He was more surprised when Ray apologised for it and Mickey saw an opportunity to ask Ray to help him. Before Mickey could cook up another one of his schemes, Ray took a call from Smitty (Graham Rogers) who said that he thought something was wrong because Bridget was missing.

As Ray sprung into action, he took another call, this time from Mac (Domenick Lombardozzi). He explained that Rad was holding Bridget until the election was over. He promised to keep her safe and told Ray not to do anything stupid as it was out of his hands. Ray headed out to find Bridget and Mickey tagged along.

Ray went straight to Winslow and asked for the recording back. He told her that the cops would kill his daughter if it got out. Winslow returned it without protesting. Ray called Mac to make a trade but Mac said she’d be held until Ferrati won the election.

Meanwhile, Rad had taken Bridget to a house and had her tied up and gagged. He left Mac to watch her but said not to talk with her. Soon as Rad went, Mac removed her gag and put the TV on so they could watch Dirty Dancing. Bridget screamed for help and Mac punched her in the face to shut her up. He then got drunk and later apologised for everything but refused to let her go.

Ray was angry but Mickey told him to calm down and think. He suggested taking one of theirs in retaliation so Ray called Daryll (Pooch Hall) and Smitty. He decided to kidnap Danny and had everyone wait in the bar where the cops drank. When Danny came in Mickey approached him and Danny bought him a drink. Mickey drank up and then smacked Danny to the ground. They then dragged him out of the bar and took him away for a beating. After a serious amount of punishment from Mickey, Danny gave up the address where Bridget was being held.

Elsewhere, Winslow looked at the poll numbers and went ahead with releasing a copy of the recording. She told Novak that she was about to become the most powerful politician. However while Novak would win the election, Winslow said that she would be Mayor, pulling her strings behind the scenes. Winslow apologised to Ray for releasing the recording, knowing that she had put Bridget in danger.

While Ray was trying to get Bridget back, Bunchy (Dash Mihok) sat and had a beer with Terry (Eddie Marsan). He told his brother that he wished he could change his choices. He asked to borrow $1,000 to just go somewhere else and start again. He even suggested killing himself but Terry told him off for thinking like that. Later, Terry popped out and when he came back the FBI had turned up and were taking Bunchy into custody for his recent crimes.

At the end of the episode, Smitty took Danny to Aunt Sandy’s while the other three went to try and save Bridget. They got inside the house and Mickey saved Ray’s life, shooting one of Rad’s men in the head. Ray found the room where Bridget had been held but she and Mac were gone. On the floor he found his daughter’s necklace. I wouldn’t want to be Rad when Ray catches up with him.

Can’t wait for the next episode? Read our preview of Ray Donovan – 6×11 Never Gonna Give You Up.