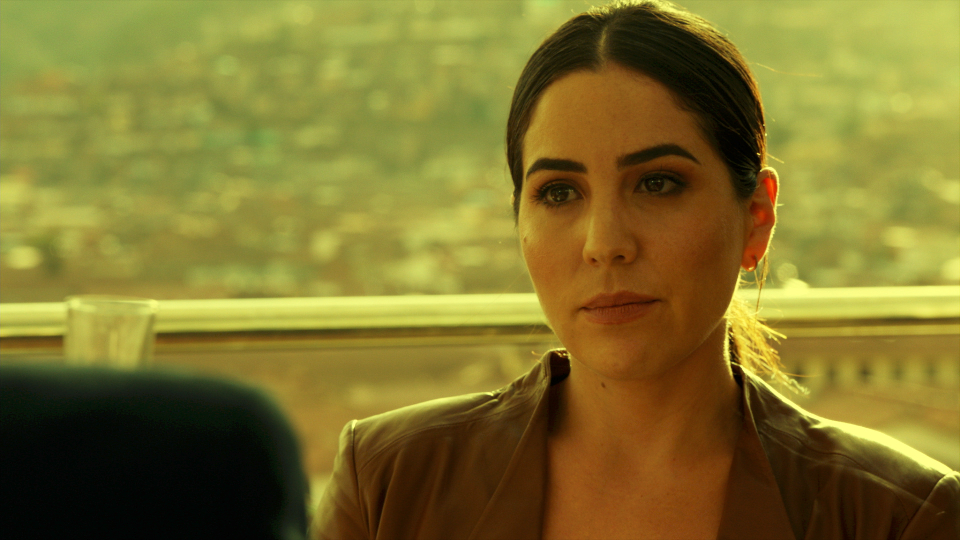 On the latest episode of Blindspot, Remi/Jane (Jaimie Alexander) made her move for Shepherd (Michelle Hurd).

The episode opened up with Weller (Sullivan Stapleton) driving at speed towards Remi. She pulled her pistol and opened fire at the car. Weller lost control and the car began to roll. Before finding out what happened next the episode cut to earlier in the day.

Patterson (Ashley Johnson) was dropping off some passports for Reade (Rob Brown) and Weitz (Aaron Abrams) for their excursion to Mexico in pursuit of Zapata (Audrey Esparza). She expressed her surprise at the two working together off book and also told Reade to be careful. He was confident things would go his way this time.

Meanwhile, at the FBI, Rich (Ennis Esmer) was playing a video of Patterson to the lab team. In the video Patterson was saying lots of incredibly nice things about him. Something seemed off and it was. Patterson walking in on the video and cut the viewing short. Rich explained that he’d been using Deepfake software with some of his own ‘magic’ to make videos of people saying whatever he wanted. His telling off was interrupted by Weller texting them both to come to his apartment.

When they arrived, Weller told them the truth about Jane – that she had reverted to Remi. They updated him on the new data cache find and said there was potential for a cure in the medical information that it contained. There was one experiment that might bring Jane’s memories back or kill her. Weller thought it was worth a shot if they could find the doctor whose name was redacted. Patterson said she’d talk to a friend who might be able to help.

Everything was interrupted by a NORAD ballistic missile alert – a nuke was heading for New York. It had apparently come from a submarine and would arrive in just 32 minutes. The team scrambled to try and evacuate as many people as possible. Rich panicked and realised he needed to call Boston (Josh Dean) to say he loved him. Weller also left a voice message for Jane to say he loved her.

As panic and chaos set in across the city, the team worked out that the submarine in the location of the launch was American. They were able to quickly confirm that they had all their missiles and that the alert was a fake. It meant that someone had managed to hack into NORAD. Rich did a quick search and worked out that the hack was coming from within the FBI. A few minutes later he had located a device – the special ethernet cable that Remi planted. As Rich invented the device he knew that Boston must be involved somehow.

Jane/Remi was at Boston’s apartment and he still thought that he was auditioning for the FBI. He noticed the device had been found and thought that meant he had failed. He quickly realised that he’d been tricked and Remi pulled a gun on him. Roman (Luke Mitchell) appeared to her and told her to kill him as he was a loose end. Violet (Hettienne Park) walked in and said they needed to leave and heard Remi talking to her dead brother. In the end Remi decided to take Boston with them as he could be useful. She fired a shot and destroyed his ankle tag.

Violet had stolen and ambulance for them to use as cover. Their plan was to intercept Shepherd who would be transferred due to protocol when there was an impending attack. They had Boston hack into the city traffic management system and turn lights green for them. What they didn’t know is that he was turning lights back to yellow after they passed through leaving a trail. Rich spotted the yellow trail, knowing Boston’s love of The Wizard of Oz.

Weller headed out to intercept Remi and try and stop he getting to Shepherd. He wasn’t quick enough and Remi already had Shepherd when he arrived on scene. A shootout with the prisoner escorts had injured Shepherd and apparently killed Violet and Boston. This left us with the scene from the start of the episode where Remi fired and Weller’s car rolled. After saying goodbye to Kurt, Remi escaped with Shepherd. As she drove away, Boston got up, he had been playing dead. He rushed to check on Weller who had suffered only minor injuries.

Remi spent the episode fighting against her worsening ZIP poisoning. She hoped Shepherd had a plan but found her to be a shadow of her former self. Shepherd suggested they run away together but Remi wanted her back to her terrorist-self.

Elsewhere in the episode, Madeline Burke (Mary Elizabeth Mastrantonio) went to Mexico with Zapata. They were in search of the hacker named Del Toro and made a deal with a cartel boss which involved $2 million and a presidential assassination. In return he set up a meet with Del Toro in Canada.

Burke told Zapata to go off to meet Del Toro on her own as she wanted to stay away from Canada. After the pair split, Reade spotted Zapata and gave chase. She ditched her jacket but ran into Weitz. Reade caught up with her and the pair had her at gunpoint.

The episode ended with Rich having a crazy idea about how to find Remi. He used the Deepfake software to create a video message from Roman. In it Roman asked for a meet and Remi rushed to him. There she found Weller waiting for her and the pair began to run at each other. We’ll have to wait for the next episode to see who comes out on top.

Can’t wait for the next episode? Read our Blindspot 4×09 Check Your Ed preview.