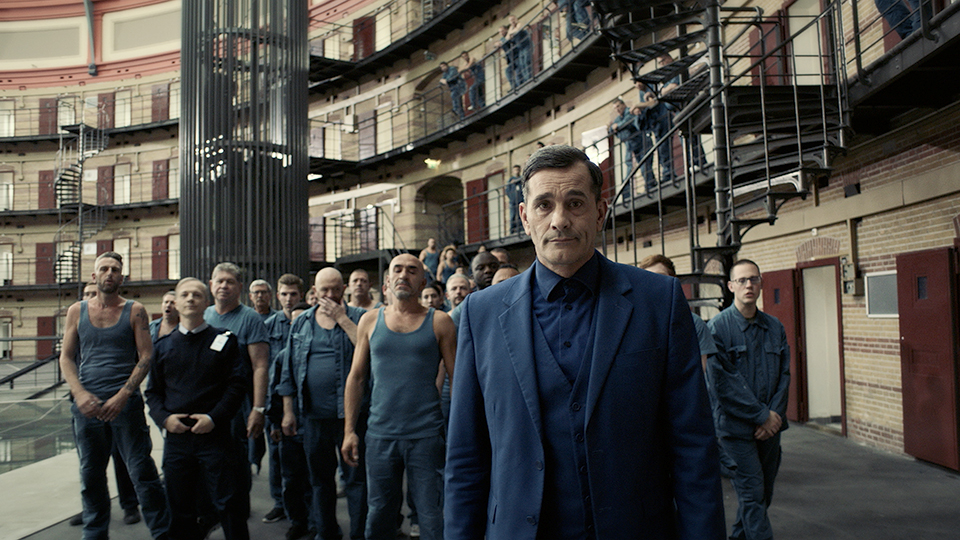 Professor T sounds like he ought to be a hip-hop rap artist, but he’s actually a quirky Belgian detective who works as a criminologist in Antwerp. Belgium has a long history of quirky detectives, of course, dating back to Poirot himself. But this series from Skyline Entertainment (and brought to the UK by – who else – the excellent Walter Presents team) is a far more darkly comic form of entertainment than old Hercule and his little grey cells.

If you want to avoid all spoilers for Professor T, stop reading now.

We’re already into series 3, and Professor T (full name – Jasper Teerlinck, played superbly by Koen de Bouw) is in prison following the shooting of a corrupt policeman at the end of series 2. As one might expect, he has a little trouble adjusting to life inside – in particular having to share a cell with a man who thinks he’s the renowned tenor, Mario Lanza. He’s not eating or sleeping and seems to be doing all he can to rile the authorities.

The professor – if you’ve not come across him before – is a fascinating character. He’s clearly OCD, fastidious in his appearance (another Poirot parallel), and prone to using escapism when the situation gets too much. This happens in the opening episode of Season 3, when his cellmate decides to defecate in their shared toilet. The professor hurriedly exits the cell to the corridor, closes his eyes and ears and imagines a bizarre dream sequence to the music of Wagner. He also fantasises that the bullying prison officer is a bellboy!

Meanwhile, back at the police station, there’s an internal affairs investigation going on, looking into the shooting of the officer. Without giving too much away about what happened at the end of series 2, the Professor’s actions were made with the intention of protecting a fellow officer, and that loyalty continues as others collude to protect one of their own.

The new storyline for series 3 begins as the officers are called to a shooting of a middle-aged man on a barge. DNA evidence leads the police to suspect a local Moroccan drugs dealer who is being threatened by a drugs cartel. The final scene of episode one is quite harrowing and unpleasant, as the cartel go to extreme measures to show they mean business. It will be interesting to see how this storyline develops.

The show is beautifully shot – the camerawork is just fabulous and entirely in keeping with the quirky nature of the production. The script is funny, touching and well-paced, and the storyline – so far – is gripping.

But it’s the prof who is the real star. De Bouw’s performance is mesmerizing and poignant. And what might have been a formulaic cop show is lifted to new heights thanks to his characterization. On the face of it, this could have been a bit of Belgian fluff – like a European version of Monk, the San Francisco based detective show that it’s sometimes been compared to – but Professor T is much, much more substantial than that. Check out Seasons 1 and 2 first, and then enjoy this latest instalment. You won’t be disappointed.

Walter Presents: Professor T series 3 is available to stream on All4 in full from Friday 4th January 2019.

In this article:Professor T, Walter Presents