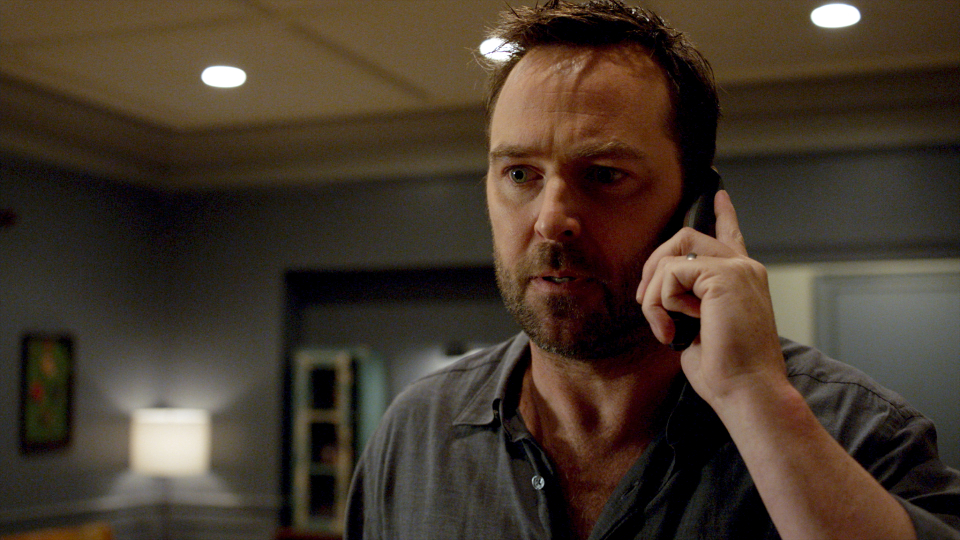 On the latest episode of Blindspot, Remi’s (Jaimie Alexander) schemes put her and Weller (Sullivan Stapleton) in danger.

The episode opened up with the cliffhanger from last episode with Weller confronting Jane to find out what’s really going on.

Weller has been suspecting something was wrong for a while and since following Jane he’s realised that she’s up to something. After confronting her, Jane attempted to lie her way out of the situation to keep her cover as Remi. It wasn’t working so she tried changing tactics and blaming things on Weller for not trusting her.

Weller had his sidearm drawn during the conversation and things really weren’t going well. Before they could resolve anything, a knock came at the door. Weller asked Jane who it was and she said she had no idea. Outside they found a young girl called Laurie (Sasha Diamond) asking for help. The pair put aside their differences for a moment while they let her in to use the phone to call her sister.

After hanging up the phone, the girl thanked them for their help and offered to bake some cookies. As she opened the door to leave a bunch of armed men stormed inside. Weller and Jane immediately took the fight to them but just when they seemed to have the upper hand, the girl pulled out two pistols and they were forced to surrender.

A woman named Eve (Gillian Zinser) walked in and demanded her money back. She’s after the cash that was taken from the criminal bank a few episodes ago. Weller pointed out that they don’t have it but was surprised to learn that she was after $500,000 that Jane stole for herself. Jane denied it but after being shown a video from a hidden camera in the vault she was proved to be telling more lies.

Everything finally clicked into place for Weller and he realised that Jane had reverted back to Remi. It all suddenly made sense to him and she could no longer keep up the lies. Despite this Weller still believes that Jane is hiding in there somewhere and that things can be fixed. He’s no going to give up on his wife without a fight.

Meanwhile, at the FBI, Rich (Ennis Esmer) and Patterson (Ashley Johnson) were trying to find Roman’s next data cache. Before they got to it, Rich tried to show Patterson a movie he’d made about the Book of Secrets that he keeps banging on about. Patterson didn’t watch it all because an image of a turtle gave her an idea.

The turtle made her think about the old programming language called Logo where simple instructions moved a primitive robot known as a turtle. It could be used to drawn simple shapes and the clues led them to write a Logo program. The result was a shape that looked like the Star of Life.

The used this information to predict where the data cache might be. Rich was convinced it was near an analyst’s desk in the office and began smashing up the floor but came up empty. Patterson wondered if the clue was actually pointing at the analyst who worked at that desk. They brought him in and retrieved the cache from his ID. Analysing the data revealed a wealth of medical information that might help with Jane’s ZIP poisoning.

Back with Weller and Jane/Remi, Eve and her team wanted them to retrieve an evidence crate from an FBI storage facility. They refused but were placed into FBI vests rigged with C4 so had no choice but to comply. After getting into the facility, Weller said that the vault with the crate was full of hidden cameras so Eve sent them in alone.

Once inside, Eve said they had 60 seconds to find the crate or she’s blow their vests up. Weller and Jane quickly got to work and found the vests had anti-tamper mechanisms. Instead they located the antenna on their vests and blocked the signal with duct tape so that Eve couldn’t detonate them. This bought them some time to dismantle the vests before Eve and her team broke the door down with a fork lift.

Weller found the crate which looked to contain some kind of advanced explosive device. He then rigged the C4 to blow a hole in the back of the vault to try and stop Eve from getting her hands on the device. It almost worked but Jane/Remi stole his ID card and locked him inside while she made off with the device.

Outside she gave up the device to Eve and made her escape. It wasn’t looking good until Weller revealed a backup plan. He’d saved some of the C4 from one of the vests and put it in with the device. As Eve tried to make off he use the remote trigger to detonate it.

Elsewhere in the episode, Madeline Burke (Mary Elizabeth Mastrantonio) tasked Zapata (Audrey Esparza) with tracking down a hacker named Del Toro. She needed his services to crash a plane using the tech Zapata stole last episode. Zapata is really starting to look uncomfortable with Burke’s demands and I’m sure she’s working deep cover for the CIA.

Also, Weitz (Aaron Abrams) and Reade (Rob Brown) tried to come up with a way to get to Zapata. Weitz decided to use Burke’s tactics against her and went to her with an off the books request for some files. She offered to work with him and make him president. After getting the files, Reade spotted the name of a pilot that was used in each location that Zapata was known to visit. They set up an alert on the pilot which triggered when Zapata headed off for Mexico. They set off after her.

The episode ended with Remi calling Weller at home. She was checking to see if he made it out alive. Obviously he did and he teased her that she sounded happy. She promised to kill him.

Can’t wait for the next episode? Read our Blindspot 4×08 Screech, Thwack, Pow preview.