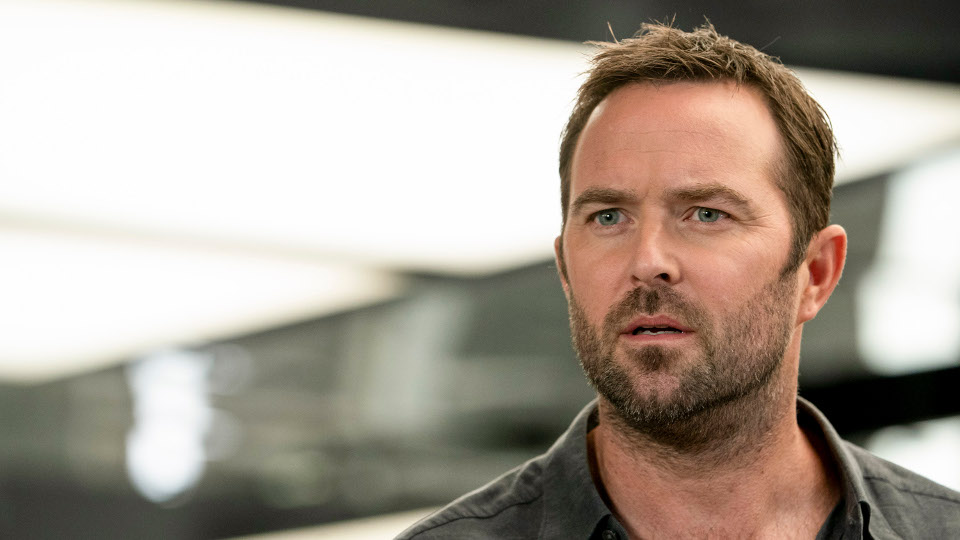 On the latest episode of Blindspot, a tattoo pointed to someone from Weitz’s (Aaron Abrams) past.

The episode opened up with an assassin holding a gun over a man named Justin Trimble (Adrian Alvarado) who was pleading for his life. The assassin pulled the trigger and left him to bleed out. Before he died, Justin managed to write the letters GPA on the floor with his own blood.

Meanwhile, Jane/Remi (Jaimie Alexander) looked to be staging a breakout attempt for Shepherd. Resistance seemed heavy and she failed. It was then revealed that she wasn’t doing it for real, it was one of many practice runs in a warehouse. The main problem was the lock cracking device wasn’t quick enough so Jane told Violet (Hettienne Park) to find a solution to speed it up.

A frustrated Jane headed home. There she was confronted by Weller (Sullivan Stapleton) who asked how her run had gone. Lying, Jane said it was good and turned down Weller when he asked to go as well next time. He’s obviously suspicious of his wife and is getting closer to finding out what she’s up to.

At the FBI, Weitz chaired a meeting with the different agency heads. Keaton was still in a coma so the CIA has sent his deputy, Sabrina Larren (Jen Richards) instead. She wasn’t happy about what had happened to Reade (Rob Brown) and wanted answers as to how Zapata (Audrey Esparza) managed to gain access to their systems. Weitz let Sabrina interrogate Reade and he told her the truth about what happened.

While Reade was interrogated, the rest of the team looked into a tattoo case that was triggered by the GPA murder. It turned out that Justin was a congressman and that the GPA has been throwing money at congress members to control how they voted. One of the names involved proved to be a surprise because it was Matthew Weitz. They asked him about Justin but he lied about knowing him.

Rich (Ennis Esmer) attempted to stick up for Weitz as everyone was now suspicious of him. Rich started to change his mind as well though, when Weitz cancelled his meetings and took a car to the house of a Congressman named Frank Davenport (Mario Van Peebles).

Meanwhile, Weller and Jane searched Justin’s home and turned up a concealed USB drive. An inspection of the drive revealed a recording of Justin being blackmailed by the GPA. Analysis of Congress, and who had taken money from the GPA, led the team to discover the true motives of the GPA. They were trying to remove sanctions on China. Weitz called for every affected Congress member to be taken into protective custody.

One female member who was trying to expose the GPA was shot as she left home. She was rushed to hospital where Weller and Jane prevented another assassin finishing the job.

Reade and Weitz went back to Davenport and he revealed he was also at risk of being blackmailed. For some reason they allowed him time alone, and of course he was the one behind everything. He called for the FBI to be eliminated and eventually it led to Reade saving the life of Weitz.

Back at the office, Weitz agreed with Sabrina to suspend Reade as a result of her investigation. Weitz later explained that he did it to deflect attention from him so that Reade could get to Zapata before the CIA.

Elsewhere in the episode, Madeline Burke (Mary Elizabeth Mastrantonio) tasked Zapata with obtaining some secret research. She was able to blackmail an engineer into helping.

The episode ended with Weller confronting Jane once again at home. He’d paid a visit to the warehouse and been shot at by Violet. Now, gun in hand, he wanted answers but we’ll have to wait for the next episode to see if we get any.

Can’t wait for the next episode? Read our Blindspot 4×07 Case: Sun, Moon and the Truth preview.