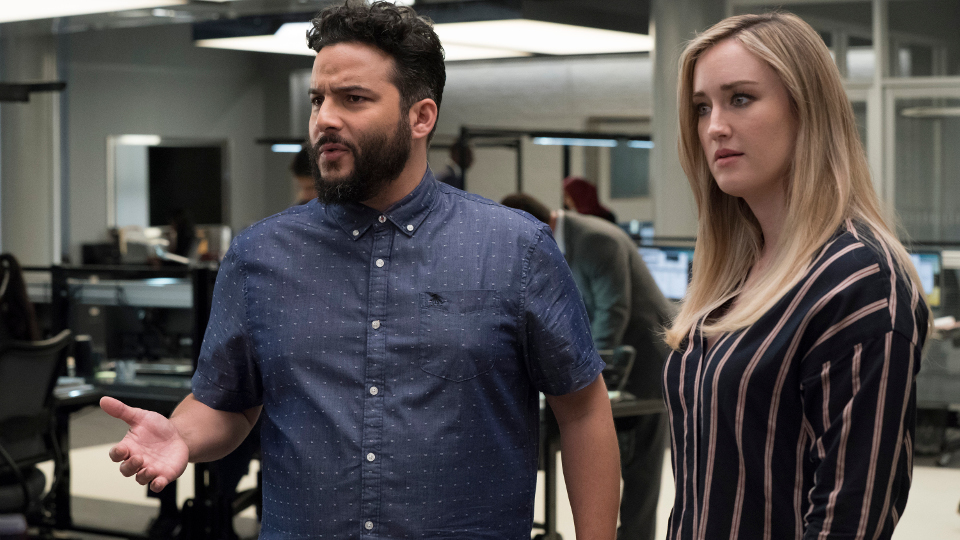 The episode opened up where the previous one left us, with Zapata pointing a gun at Reade’s head in his apartment. He’d just subdued Claudia (Britne Oldford) when Zapata pulled her weapon on him, turning the tide back in their favour. She and Claudia were there to access the FBI servers and tied Reade to a chair while they determined their next move.

Claudia was all for torturing Reade in order to get his password. She began searching the kitchen for weapons and settled on a carving fork which she heated up and held to his face. Zapata didn’t seem happy about the whole thing and Reade focused his attention on her.

It’s still not clear at this point if Zapata had truly turned bad or if she’s working undercover. We’re starting to suspect that she’s undercover because she knocked Reade out to stop Claudia torturing him. To buy them more time Zapata sent Patterson an email from Reade’s laptop to say he was taking a sick day.

After Reade awoke, Claudia realised that she could use his feelings for Zapata to her advantage. She held her gun to Zapata’s head and promised to blow her brains all over Reade if he didn’t give up his password in five seconds. It worked and he gave it up to save her. Claudia actually looked like she might have gone through with it.

At the FBI, a new tattoo hit led the team to an assassin called the Scythe. Keaton (Chad Donella) was called in to help and he updated them on what the CIA knew. They tracked their target to a medical research lab and found him poisoning an employee. The team captured him and took him back to the FBI.

At the office, the Scythe recognised Rich Dotcom (Ennis Esmer) by a different name and claimed he was responsible for his actions. Rich initially had no idea what he was on about but eventually they worked out that everything was linked to an old scam that Rich ran. He had been taking money from people to offset their carbon footprint, but instead just kept their money.

Patterson (Ashley Johnson) did some digging and uncovered a link between the Scythe and a man called Daniel. He led a movement known as ELM who were inspired by Rich’s scam and had been carrying out terrorist attacks while claiming they were saving the planet. Of course they were just about to launch a new attack on New York using white phosphorus so the race was on to stop them.

Meanwhile, Jane/Remi (Jaimie Alexander) tried to get Keaton to agree to let her see Shepherd one last time. He wasn’t keen on the idea but she told him she was dying and had her reasons. Eventually he agreed to take her the following day and Jane was able to find out how long the trip would take. This helped her pinpoint which Black Site Shepherd was being held at.

Back at the FBI, the team decided to crack ELM they needed to use Rich. They sent him undercover, using his old alias, with Weller (Sullivan Stapleton) for backup. It worked and the pair were soon accepted. While Rich kept Daniel busy, Weller had a snoop around and found that their location was the staging area for the attack.

Rich managed to steal Daniel’s phone and get it to Weller. They were able to upload some of the data back to Patterson before Daniel noticed it was gone. With their cover blown, Rich and Weller tried to flee. Rich ended up hiding in the back of Daniel’s pickup truck which was driven to the location of a drone swarm that was to be used for the attack.

While Weller, Jane and Keaton tried to catch them up, the ELM used an EMP device to stop their communications. Rich managed to stall them a bit but they managed to launch the drones. When the team arrived a firefight broke out and many of the ELM were killed. Weller managed to get the drone controls and fly them back to their location, preventing the attack. Keaton took a bullet during the firefight and was taken to hospital and put into a coma. Looks like Jane won’t be getting that trip to see Shepherd.

Elsewhere in the episode, a possible treatment was uncovered for Jane’z ZIP poisoning. Jane went for some painful tests but sadly she wasn’t a match for the procedure.

At the end of the episode, Zapata executed Claudia in front of Madeline Burke (Mary Elizabeth Mastrantonio) before she could tell her anything. Zapata said that Claudia was a mole for MI6 and Burke praised her work. We’re still convinced that Zapata is just working for the CIA and killing Claudia was to keep her cover intact.

Jane met again with her mystery woman Violet. She updated her on the location of Shepherd and Violet promised to begin plans to rescue her.

Can’t wait for the next episode? Read our Blindspot 4×06 Ca-Ca-Candidate for Cri-Cri-Crime preview.