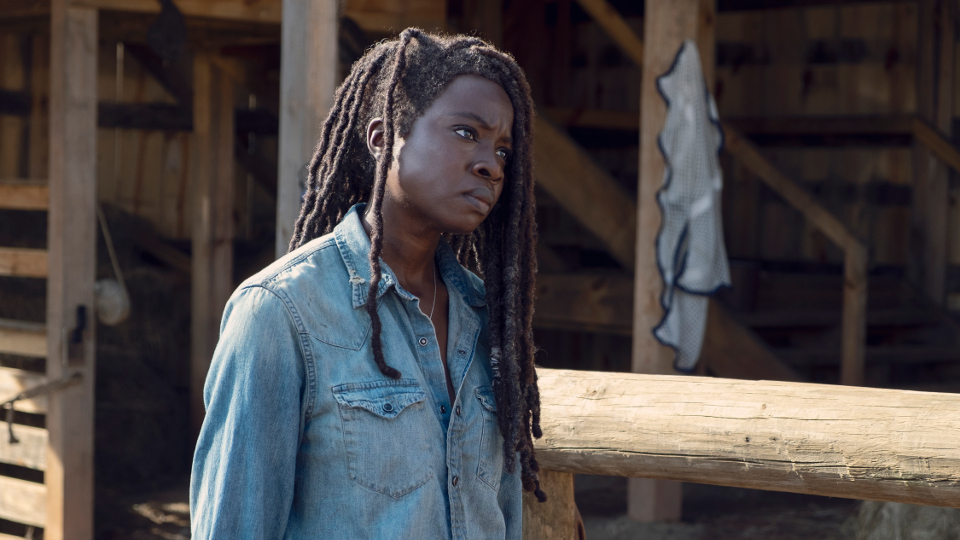 In the season 9 mid-season finale of The Walking Dead, we finally got to meet the most terrifying threat yet, The Whisperers.

The episode opened up with Jesus (Tom Payne), Aaron (Ross Marquand), Daryl (Norman Reedus) and Dog out on their rescue mission for Eugene (Josh McDermitt). They were scoping out an unusual herd of walkers from afar. As we’ve seen in pretty much every single episode of The Walking Dead, walkers just tend to shamble in a straight line unless they hear a noise. This new herd was different and just kind of wandered around amongst each other in the middle of a large field. The group had never seen anything like it and Daryl indicated that a storm was coming. They moved on avoiding the herd.

At Hilltop, a rider warned the community that strangers were approaching. In what seemed like a well rehearsed drill, everyone dropped what they were doing and retreated to safety inside the walls. Dianne (Kerry Cahill) stood guard on the wall as Michonne (Danai Gurira), DJ (Matt Mangum), Siddiq (Avi Nash) approached with the new group – Magna (Nadia Hilker), Luke (Dan Fogler), Connie (Lauren Ridloff), Kelly (Angel Theory) and Yumiko (Eleanor Matsuura).

This wasn’t the welcome we’re used to seeing and a further hint that something big went down during the six-year time jump. Before being allowed to enter, they were forced to hand in all their weapons, much to Magna’s disgust having just got them back. Tara (Alanna Masterson) spoke to Michonne and again it wasn’t the friendliest of chats. She agreed the group could stay, pending approval from Jesus, but said they would have to earn their keep.

Michonne already surprised at the news last episode that Maggie had left, was also surprised to hear that Eugene was missing. It was also news to her that Aaron had been meeting behind her back with Jesus. She had a friendlier chat with Carol (Melissa McBride) and it seems that relations with The Kingdom had also broken down. She decided that Alexandria would not take part in the fair that Ezekiel was arranging.

Back with Daryl, his tracking experience told Jesus and Aaron that the herd was coming for them. To try and change the direction of the herd, Daryl wound up an alarm clock and tossed it in the opposite direction to where they were heading. As the herd closed in on their position it looked like it had grown considerably.

At Hilltop, Rosita (Christian Serratos) awoke in a panic while Michonne and Siddiq were chatting. They told her that Daryl and the others were looking for Eugene but this didn’t help. Instead she shot up out of bed and said they didn’t know what they were dealing with.

Meanwhile, Daryl and the others came across the barn where Eugene was located as the storm began to hit. They found him concealed under the floor, still with a dislocated knee and completely terrified. Eugene said they needed to leave because the herd were looking for him. He also said that the herd wasn’t normal and that they whispered to each other. Dog began barking signalling that the walkers were approaching so they fled as fast as they could.

The group tried to evade the walker herd but it felt like they were being hunted. Eugene had a theory that their brains had evolved allowing them to track and hunt. Daryl volunteered to stay alone to draw the herd away while the others escaped. He lured them to his location using Dog’s barking and a bunch of firecrackers. However the herd ignored the distraction and continued their pursuit of the others.

Elsewhere in the episode, Henry (Matt Lintz) began his blacksmithing training with Earl (John Finn) and Alden (Callan McAuliffe). He seemed to be getting in the swing of things while keeping one eye on his crush, Enid (Katelyn Nacon). He realised she might be a bit out of his reach though when he saw her kissing Alden.

Henry turned down an offer to spend time with Earl and his wife that evening. Henry said he was tired, however, he had plans to hang out with some other teenagers that he’d met – Gage (Jackson Pac), Addy (Kelly Mack) and Rodney (Joe Ando-Hirsh). The four snuck out after dark to drink moonshine and mess about. They took Henry to a pit that they’d dug that contained a trapped walker. It was used as their source of entertainment and they were using it for target practice and throwing rope rings onto it. Henry was appalled, he jumped down and killed the walker. While the others left him there.

He was later found and put in one of the cells for being drunk and disorderly. His punishment was two days under lock and key. Earl was disappointed that Henry had lied to him. Henry refused to reveal who else was involved and was threatened that the blacksmith training could be stopped. Henry accepted his punishment and explained how he wanted to help his parents so Earl gave him another chance.

Back at Alexandria, Gabriel (Seth Gilliam) became increasingly frustrated with having to babysit Negan (Jeffrey Dean Morgan). It was made worse that he’d had news that Rosita was hurt and that he couldn’t go to help her. Later, Negan noticed that his cell had been left unlocked and he strolled right out.

At the end of the episode, Jesus, Aaron and Eugene tried to lose the walkers in a cemetery as a thick fog descended on them. Them eventually found themselves trapped by a stuck gate so Jesus and Aaron prepared to fight. As the herd approached they could hear that they were actually whispering just like Eugene said.

Michonne arrived outside the cemetery gate, unknowingly followed by Magna and Yumiko who came to help. They got to work on freeing the gate while Eugene tried to push. Jesus told Aaron to help Eugene out while he held off the walkers and begun cutting them down. As he took a swing at one of them it dodged out of the way and stabbed him from behind. As his life slipped away it whispered to him, “You are where you do not belong”.

The others rushed to save him but were too late. Other Whisperers began to attack and Daryl arrived in time to kill one. Safe for the moment, Michonne noticed that her katana was covered in fresh red blood. Daryl examined the body of a Whisperer and spotted unusual stitching on the back of its head. He cut it away and revealed it was a man wearing the skin of a walker.

As the episode ended the danger returned as the Whisperers surrounded them. They could be heard whispering again saying things like “They’re trapped” and “Keep them together”. We’ve now got a couple of months to wait to see what happens next. Will they all survive?

The Walking Dead season 9 will return in February 2019 on AMC in the US and FOX in the UK.