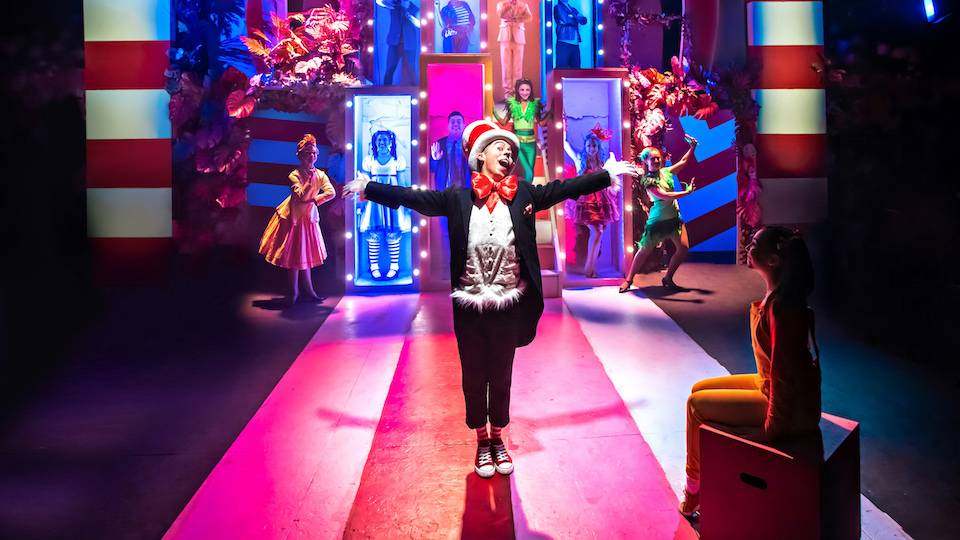 The fantastical world of Dr. Seuss bursts onto the stage in this larger-than-life musical
extravaganza from award-nominated Immersion Theatre, brimming with fun and excitement for all ages.

Set to an electric score and co-conceived by Monty Python’s Eric Idle, this raucous and ultimately touching story by Tony Award winners Lynn Ahrens and Stephen Flaherty is a feel-good musical bonanza.

Join the mischievous Cat in the Hat, Horton the Elephant, Gertrude McFuzz, and a host of other much-loved characters on a magical, madcap adventure from the Jungle of Nool, to the Circus McGurkus, to the tiniest planet in the sky, Whoville.

Seussical is far from being only a show for children; it is a fantastical, colourful, high-energy musical filled with larger-than-life characters and an incredible and varied score featuring a range of genres from funk, to big band, to rock and roll, to musical theatre. The characters all have something which we can all connect with, be it a sense of mischief, insecurity, that feeling of you against the world, and everything in between.

From bullying, to unrequited love, to being insecure with your body, to inclusivity, Seussical touches on some of today’s most topical issues in a funny and moving way. With choreography from 2018 Off West End award winner Chris Whittaker, this production is an intelligent, hilarious and moving piece of theatre whose themes, plot, characters, and score resonate and entertain audiences of all ages.

Director James Tobias said, ‘Seussical encapsulates everything Immersion Theatre stands for. We have worked incredibly hard to develop a lovely reputation in the regions and we have chosen this exceptional show as our re-introduction to London’s Off West End circuit. It is no exaggeration to say this has been on my bucket list of shows for Immersion to produce since the company’s creation in 2010. Not only is the music sensational, but the characters are beautifully created, being madcap enough to astound and keep younger audience members mesmerised throughout, but real and relatable enough to give the story heart and substance.’