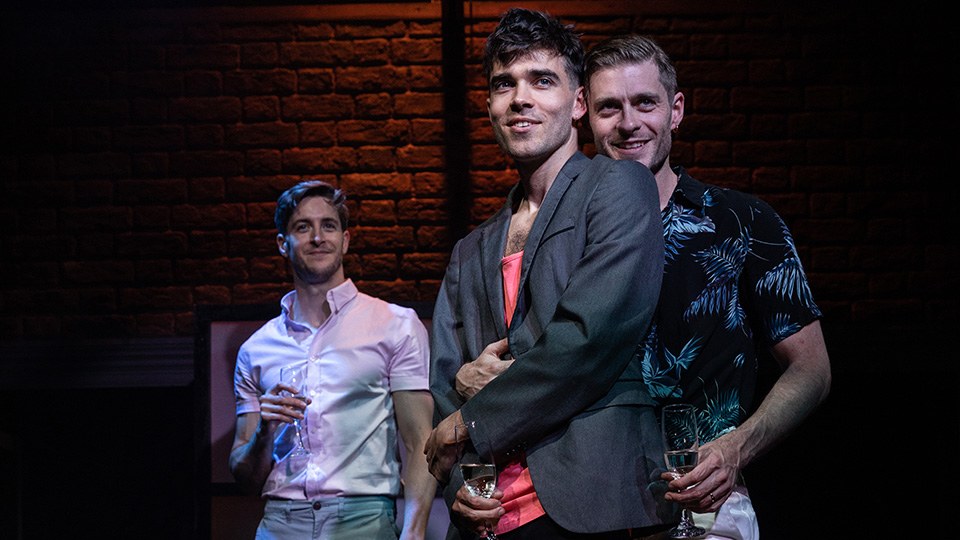 The set looks like Tracey Emin’s My Bed. The lights dim and a thumping dance beat begins. We then see three completely naked men writhing and reaching orgasm at exactly the same time. You get the sense that this climax is actually the start of something more significant. This is quite a startling and engaging opening sequence to Afterglow which runs at the Southwark Playhouse until 20th July.

S. Asher Gelman’s Afterglow has arrived in London following a phenomenal run off Broadway which was extended on multiple occasions. This is the story of a married gay couple, Josh (Sean Hart) and Alex (Danny Mahoney), who decide to invite a third man, Darius (Jesse Fox) into their bedroom as a sort of experiment that goes horrifically awry.

The subject matter may be more The Gays Of Our Lives with its affairs, forbidden love, surrogacy and racy sexy scenes, but the narrative and script thankfully more than lifts it. There are also some brutally honest and terrific dramatic scenes played out where the acting is really on display.

Josh is not a character you can lend much sympathy. His selfish and indulgent endeavours and attention seeking become rather annoying, however this is a beautifully nuanced performance from Sean Hart and when the true devastation of his antics becomes apparent, he unravels brilliantly and it’s devastating to watch. You can’t help but feel for Alex when he realises the seismic shift in his marriage, one scene in particular where you feel he is making Josh choose between him and Darius is heartbreaking to watch unfold and Danny Mahoney will have your heart in his hand. Darius should be the villain of the piece, but when he breaks down as the affair supposedly comes to an end, the pain is palpable all over Jesse Fox in a really engaging, real and touching performance.

Tom O’Brien’s stage direction is at times breathtakingly brilliant. There are some inspired set pieces where Alex is in the darkness looking bereft in the background while the affair between Josh and Darius intensifies. The lighting and choreography of the sex scenes is actually rather beautiful, particularly in the shower scene.

There has been talk of the nudity being relentless, but we are probably completely desensitised to it, seeing people in the buff longing for attention when simply scrolling Twitter; I think the nudity lends a curious quality and power to the story, and it is certainly not titillating, just like Julianne Moore in Short Cuts during an argument with her husband while literally all of her was on display.

The play is not without its minor missteps. There is a distinct lack of diversity and this can perhaps make it seem tone-deaf to some. And a full blown mid-life crisis from Josh at 35 is rather superficial.

Afterglow is a powerful and dramatic play that will tug on your heart long after you have left the theatre. Those looking for a fitting close to the play will be left disappointed, as the ending, as well as the subject matter, is left wide open. A raw, engaging and brilliant must-see for Pride month and beyond.