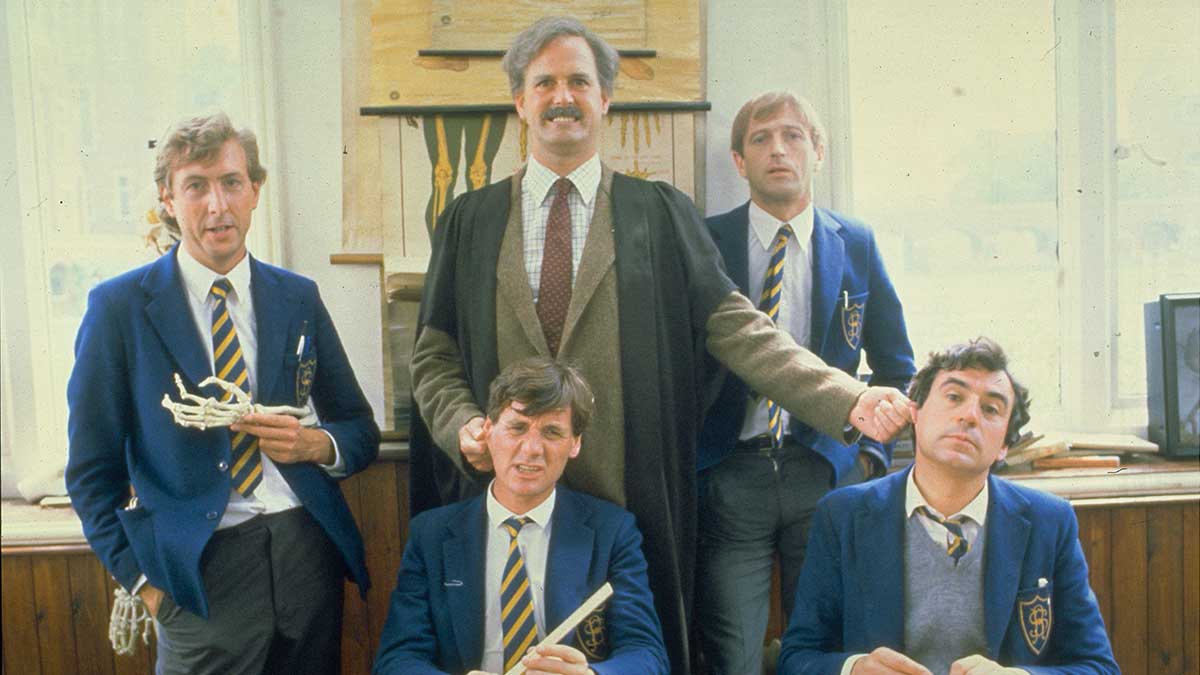 The final big screen outing for the revered comedy sextet – Monty Python’s The Meaning of Life – hit cinema screens in 1983. During the 1970s they had made The Holy Grail and The Life of Brian, the latter of which was not without controversy, but both predecessors became comedy classics, and fan-favourite lines entered common parlance.

Somehow, The Meaning of Life (aside from one particular song) never quite entered the national psyche with quite the same level of impact. In certain ways, the film stands above the others – it is visually and stylistically very impressive. Special effects, model work and detailed studio sets give it a big-budget feel that the other two cheap and cheerful movies lack. Yet, the ultimate reckoning for a comedy film is how funny it is. Although it certainly has its moments, in the final analysis, The Meaning of Life just isn’t quite the comedy gold of the other films. It remains in their shadow.

There are perhaps several reasons for this. One is that both The Holy Grail and The Life of Brian had a strong concept that was thrashed out into a single story, threaded together by sketches. The Meaning of Life returns to the format that had worked so well for Monty Python’s Flying Circus (albeit over short TV episodes), and runs together sketches united by a common theme – the various stages of life. At feature length, this is hard to sustain. Unhelpfully, there’s a delay before the main action gets going, as the featurette The Crimson Permanent Assurance opens the movie. It details the rebellion of a group of stuffy old English bankers against the oppressive corporate American conglomerate that has taken them over. It’s a microcosm of the problems that dog the film. What is perhaps a funny idea on paper doesn’t quite translate into belly laughs for a viewing audience. The mildly satirical dig at big business is weak, and too serious. By the time of The Meaning of Life, the Pythons were in their 40s and enjoying success in different fields. They say comedy is a young person’s game. By your jaded middle age you’re too worn down with cynicism. Having said that, the model effects are terrific, and the pirate metaphor, though over-cooked, is inventive. I’m just not sure it’s quite the strong attention-grabbing opening sketch the movie needed.

Although it’s a relief to see the familiar faces of the Python team taking the lead, the opening sketch, in which a woman is giving birth in a hospital, is probably the least witty in the whole film, which means it’s a good twenty minutes before there’s much to laugh at, and it’s hard to hook viewers by then if you haven’t already. The sequences satirising the cruelty of school days (especially public school, with its bizarre arcane traditions) are brilliant, and that sort of terrain came effortlessly to the Pythons. Cleese as a brusque master blithely performing a live sex education class to a roomful of embarrassed schoolboys (Patricia Quinn bravely plays his wife) is a masterclass in ratcheting up the stakes.

That level of “are they really going to go there?” shock value is cranked up a notch later in the Mr Creosote sketch, in which Terry Jones plays a morbidly obese and obnoxious diner in a posh restaurant who starts vomiting even before ordering. Cleese’s unflappable French waiter – continuing to act as if everything is perfectly normal – is what makes the sketch so funny, even if it is grotesque. The hit-and-miss nature of the film is ably demonstrated by Eric Idle’s parts in the sketch. Before the loathsome Mr Creosote enters the restaurant, Idle entertains diners with a Noel Coward-style song on the piano called “Isn’t It Awfully Nice to Have a Penis?”, which is a dazzlingly funny ditty. At the end of the sketch, he returns as a waiter who asks the audience to follow him back to his childhood home, before losing his confidence that he has a point to make, and he becomes unnecessarily tetchy. It’s a segment that doesn’t offer much reward, but holds up the flow of the film.

That’s not to single out Eric Idle for criticism – the best moments of the movie are the songs. The Galaxy Song, which he performs for Mrs Brown whilst she deliberates whether or not to give up her liver to organ donors, is undoubtedly a highlight. And the one segment of the film that truly entered the pantheon of comedy greats is “Every Sperm is Sacred”. It is mostly sung by Michael Palin, who goes back to his roots in Yorkshire, or ‘The Third World’, as the caption tells us. The sequence shows off the late Terry Jones’ flair for direction. Perhaps as a hangover from Life of Brian, the standout moment is a satire on organised religion, specifically Catholic dogma prohibiting the use of artificial birth control.

There will be other moments that viewers especially enjoy. For me, the sentimental First World War Tommies showering their sergeant with presents and cake during trench warfare has all the absurdity of Python in their richest vein of form. There’s a lot to be said too for the English embarrassment taken to its logical extreme when death visits a dinner party.

At the final reckoning, Monty Python’s The Meaning of Life is a curate’s egg. Terrys Jones and Gilliam direct with flair and style, and all of the songs are memorable, catchy and funny. There are one or two moments of pure genius. But then there are also padded jokes and others that miss the target. It’s a worthy addition to the Python’s body of work, but it falls short of the unrelenting brilliance of the 1970s films. Scrubbed up on Blu-ray, Monty Python’s The Meaning of Life looks immaculate, and can be enjoyed in the highest definition.

Extras on the disc include an hour-long reunion filmed in 2013. Of course, Graham Chapman was long dead by then, and of the assembled living members, Eric Idle could only join remotely on screen. But there is the added poignancy that since it was recorded, Terry Jones fell ill and has subsequently passed away. Fans will feel warm, nostalgic and perhaps a little sad watching this affectionate yet joshing get-together. You can also find deleted scenes, a commentary by the Terrys and much more.