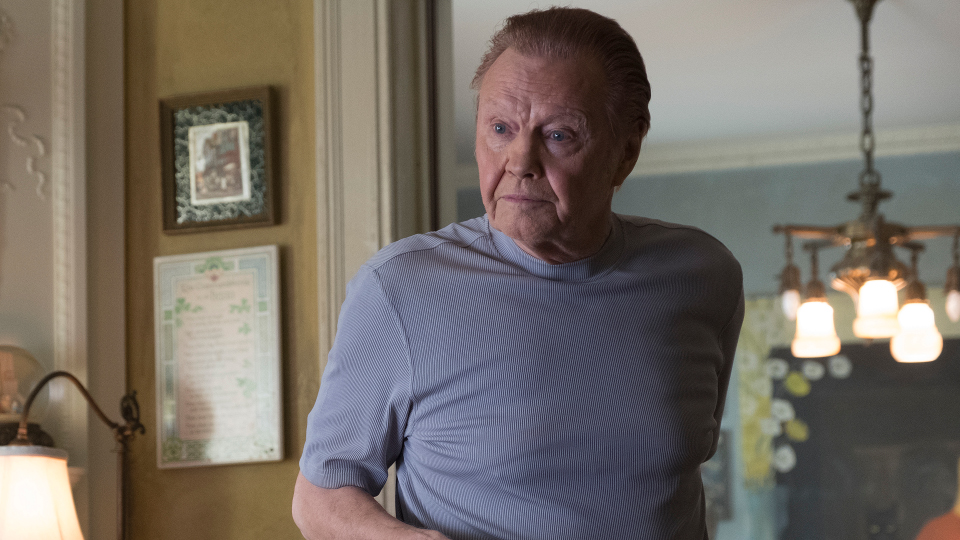 In the latest episode of Ray Donovan, Ray (Liev Schreiber) had to deal with Mickey’s (Jon Voight) latest scheme.

The episode opened up with Mickey who had kidnapped Jay White (Brian J. White). His plan was to random him for $3 million and new passports for himself, Bunchy (Dash Mihok) and Maria.

Ray headed to the set of Mister Lucky to see what Mickey had been up to. There he found a bloodied Daryll (Pooch Hall) tied up in Jay’s trailer. Ray had no choice but to call in a favour from Sam (Susan Sarandon) for the money which she reluctantly provided.

Ray placed trackers on the money and then left Lena (Katherine Moennig) to sort the passports while he went to meet Bunchy. Ray tried to reason with Bunchy who never thinks things through. He seemed to understand what Ray was saying but didn’t want to go back against Mickey. Also whatever happened he would probably do time for assaulting the prison guard. Ray decided to give Bunchy one final ultimatum, take the money and he’d be dead to him just like Mickey. Bunchy took the money to Ray’s surprise.

While Bunchy is running round getting everything sorted, Mickey was back at Aunt Sandy’s (Sandy Martin) place. There he was getting drunk, counting his money and taunting a tied-up Jay. Bunchy arrived just in time to stop Mickey from killing him for butchering his script and putting in a character that looked like Mickey. Bunchy put Jay in a car boot and then left him in a location for Ray to collect.

Ray got Jay back who was traumatised by the whole ordeal. Sam wanted him back on set and filming got underway again the same night. During his next scene with the Mickey lookalike, Jay had to be held back from actually killing him.

When Bunchy returned to collect Mickey and the money he found his father passed out. After waking him up they discovered that Sandy had taken off with all the money herself. As ever, Mickey has made the situation worse.

Elsewhere in the episode, Terry (Eddie Marsan) decided to go and take part in the underground fight club. He was put on the card against an ex-Polish Special Forces guy. Terry took a hell of a beating but turned the fight around and knocked the guy out. It looked like he absolutely loved it.

Ray’s saviour Mac (Domenick Lombardozzi) found himself under investigation by Internal Affairs. He was given a choice of go to jail or wear a wire. I’m sure the wire will come up again and cause problems for Ray.

Finally, Bridget’s (Kerris Dorsey) boyfriend Smitty (Graham Rogers) found himself in a whole heap of trouble with a guy called Chalky. Smitty owed him $80,000 and tried selling as many drugs as he could to get it together. He of course didn’t manage it so Chalky and his crew came and smashed his apartment up.

Smitty came clean with Bridget about his past and then went to see Ray. He told him everything and Ray offered him the money to pay off his debt. Smitty refused and said he’d sort it but he wanted Bridget to live with Ray for a while. Ray decided to sort it out and took Smitty to see Chalky. He grabbed his baseball bat, kicked Chalky’s door in and told him that he would take on the debt. Chalky refused so Ray and Smitty gave them all a beating.

Can’t wait for the next episode? Read our preview of Ray Donovan – 6×05 Ellis Island.