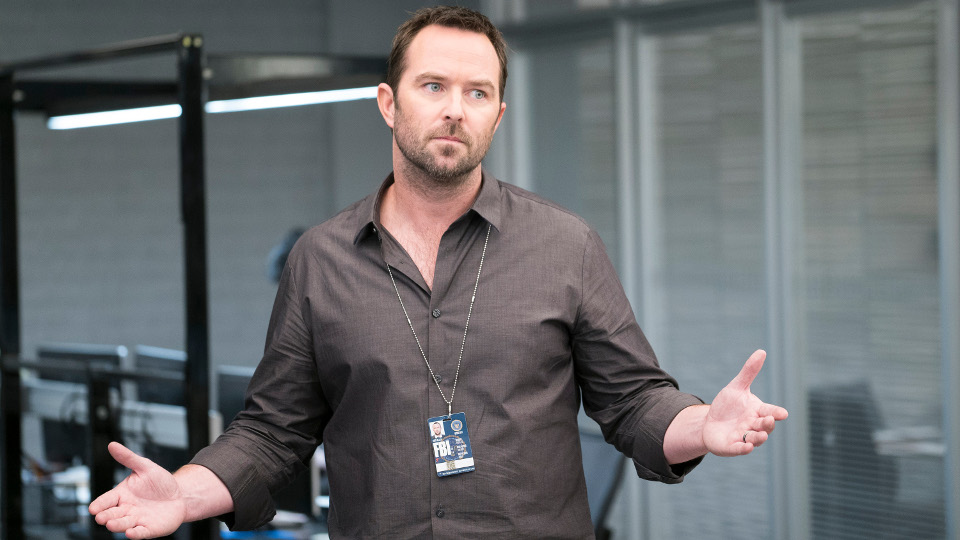 On the latest episode of Blindspot, the FBI started to close in on Jane/Remi (Jaimie Alexander).

The episode opened up with a flashback to 13 years earlier. It showed two guys creating a giant world map which was mounted in the FBI offices. Not much else was revealed other than they worked for Zero Division (which is now led by Nas Kamal) and that they have put hidden clues in the map.

Back in the present day, Remi was still doing her best to keep her cover as Jane. This meant pretending to be happy with Weller (Sullivan Stapleton) despite wanting him dead. Weller seemed to have no clue about what was going on but throughout the episode he started to become a little suspicious.

Back at the FBI, Weller was cleared for duty having recovered from his gunshot wound. Rich (Ennis Esmer) in particular was pleased that Weller was back in action. After their meeting, Rich noticed that part of the world map mural resembled one of Jane’s tattoo’s.

Patterson (Ashley Johnson) examined it and discovered it was made from a variety of materials. She wanted to bring in an art specialist and Rich suggested Boston (Josh Dean) his ex-boyfriend who was still on house arrest.

It was a good move as Boston discovered that parts of the map were magnetic. He launched a handful of metal filings at the map and they clumped together in specific locations. Measuring the distance between the locations formed an IP address of a website. This led the team to a real-world address.

Patterson went with Jane to investigate and found an abandoned warehouse. Inside they found a working ATM which prompted for a passcode. Realising the code was a puzzle it didn’t take long for Patterson to work it out by spotting out of place shells on the background of the screen. Upon entering the code the ATM greeted the pair by name and then knocked them out with gas.

When they awoke they were met by a man who worked for Zero Division. His puzzle was apparently designed to promote information sharing between the different agencies. He requested that they come back to him with certain FBI files to stop an incoming threat.

Back at the FBI, they were suspicious of the man because they could find no record of him. A little more digging revealed that he was actually a Russian spy trying to get intelligence. They decide to go back to him but this time Patterson created some drugs that would prevent the gas from working.

Remi decided she could use the situation to her advantage and tampered Patterson’s pills. Her aim was to strike a deal by trading the location of the man’s family (who he thought were dead) in exchange for CIA Black Site locations. She wanted these in order to track down Shepherd.

Her plan mostly worked but the FBI turned up before she could get all of the information she needed. In the end she executed the man to keep her cover safe.

Elsewhere in the episode, Rich spotted Zapata (Audrey Esparza) with Blake on CCTV in Paris. He took the information to Reade (Rob Brown) who asked him to keep it quiet. When the information came in about HCI global’s plane crashing, Rich told Reade that Zapata was also on the manifest but Reade refused to believe she was dead.

Zapata went with Madeline Burke (Mary Elizabeth Mastrantonio) to Switzerland to retrieve a hard drive belonging to Crawford. Zapata got Crawford’s wife to give it up and then Burke killed her and told Zapata to clear it up. After Burke left, Zapata discovered the daughter hiding in the closet.

At the end of the episode, Remi had hallucinations of Roman (Luke Mitchell) again. She had created a needle full of poison to use on Weller if she needed it. Roman wondered if she’d have the guts to do it. Weller returned home and asked what Jane was hiding behind her back as Roman told her to kill him. Will she go through with it?

Can’t wait for the next episode? Read our Blindspot 4×03 The Quantico Affair preview.