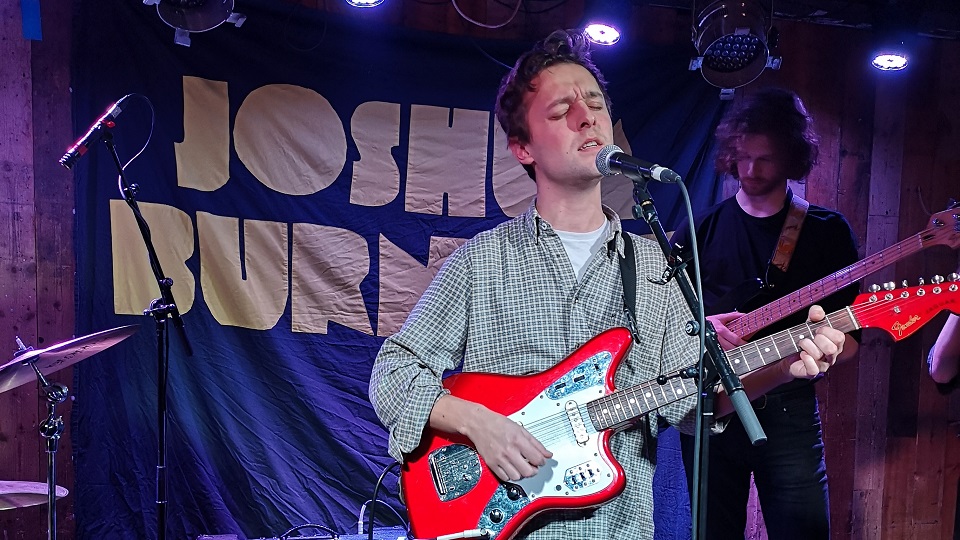 Northern Irish singer-songwriter Joshua Burnside has rapidly become one of the most exciting artists in folk music. He burst onto the scene with his debut single Black Dog Sin in 2013, which was championed by BBC 6 Music’s Lauren Laverne and Gideon Coe. Since then he’s released a further two EPs and several singles, as well as his 2017 debut album EPHRATA which has racked up 5 million Spotify streams to date. He’s currently out on a short UK tour and last night took to the stage at the intimate Waiting Room in London.

Accompanied by his three-piece band, Burnside opened his set with a snippet of Tunnels Pt 1, which created an eerie feel. After an intro of rattling drums, screeching guitars and bombastic horns which built to a huge drum roll, he then moved into Little Blind, taken from his debut EP. The sparse melody really highlighted the bluesy tones and anguish in his vocal as well as the cinematic feel of the song, before he switched it up yet again to a swaggering, funky groove. He hit a huge note at the end and was rewarded with a volley of applause from the enthusiastic crowd.

Changing tempos became a running theme throughout Burnside’s set, as he mixed together songs from across his career. Northern Winds, from his new EP released this spring, started with delicate lilting guitar before picking up into a driving, lively rhythm. Meanwhile, the transition between the dramatic Concubine and the menacing, edgy Black Dog Sin with its almost rapped lyrics was utterly seamless. In the latter song Burnside could be seen throwing himself around on stage and jamming with his band, bringing a new energy to his performance.

However, for me the best moments came when Burnside’s vocals took centre stage, such as on the meandering, twangy 26th Street or the soaring Half Homes, which made the room feel ten times its size as the layers of instruments built up behind him. He’s got a great depth and richness to his voice that really shines through on the more stripped-back songs in particular, and has a real intensity and conviction about him when he sings, as well as filling his vocals with emotion. Additionally, he came across as warm and engaging on stage, bouncing off the crowd’s energy and cracking jokes with them throughout the performance, and they repaid him by singing along to the likes of the 90s rock-influenced Holllllllogram.

Initially Burnside closed his set with Tunnels Pt 2, which contrasted its pleading lyrics with a stomping, driving rhythm. Burnside. The crowd loudly demanded an encore, calling for ’12 more tunes!’ and whilst Burnside couldn’t quite manage that – at one point he quipped ‘I don’t know any more!’ – he happily obliged with the melancholy yet wistful Man Of High Renown and The Nervous Age, which started out funky and soulful before he dialled it way back, and then turned into a full-blown rock number. For the finale, he performed an uptempo rendition of John Martyn’s I Don’t Wanna Know that got the crowd dancing and clapping along.

Overall I came away very impressed by Joshua Burnside. He’s putting his own quirky, unique spin on traditional folk songs and isn’t afraid to draw on a wide variety of influences, as well as having some fantastically detailed lyrics and great stage presence. There were a few small things I felt were missing – I would have liked a little more of the story behind the songs, and would have loved a longer set – but overall this was a solid, accomplished performance that shows why he’s definitely one to watch. I’m intrigued to see what he does next and hope to see him performing live again in future.