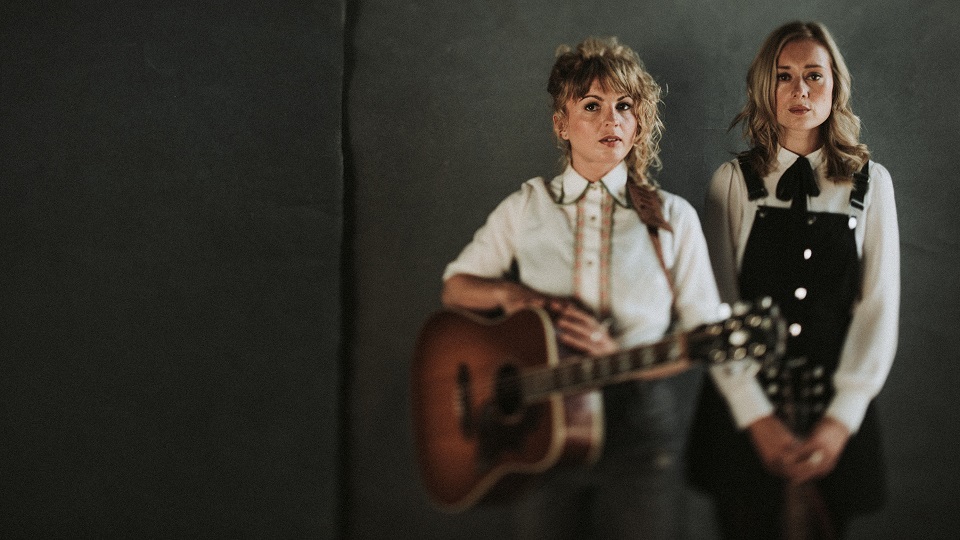 Exeter’s Abbe Martin and Hannah Wood – better known as Sound of the Sirens – first met whilst working in a local nightclub and released their first EP in 2014. Since then they’ve built up a reputation for their acoustic pop-influenced sound and emotional lyrics, including opening for Rick Astley, appearing on TFI Friday and playing Glastonbury and the Isle of Wight Festival. Last year they released their debut album, For All Our Sins, to critical acclaim. They’re currently out on tour ahead of the release of their second record early next year, including a stop at London’s The Slaughtered Lamb for London Folk & Roots Festival.

After making an appearance in opener Samantics’ set, Abbe and Hannah took to the stage to cheers and applause. They opened their set with The Order, an atmospheric song which showed off their gorgeous harmonies right from its a capella opening. It’s a real strength of theirs and paired beautifully with the sparse, sharp chords and stomping rhythm.

Throughout their performance the band performed songs from across their career, as well as some new tracks which will appear on their upcoming album. They covered a range of styles and showed off their diverse influences on the likes of Chaos, with its twangy guitars and pulsing beat and the slowed-down, piano-led Stars. I also liked the fact that they regularly switched up the tempo midway through songs such as the poppy, anthemic Together Alone (which got the biggest cheer of the night) and The Circus, which started with a desolate intro before kicking into a driving sound reminiscent of 90s rock bands.

For me what brought the whole thing together was the duo’s stunning vocals. Abbe’s sweet, smooth tones balanced Hannah’s richer, bluesy sound really nicely and their voices blended together perfectly throughout. They put them at the fore of their performance throughout the show, particularly on the raw, plaintive Keeping Us Alive and the subdued, bittersweet All That I Could Find. It’s an approach that really allowed the details and vivid imagery of their lyrics to shine. I was also impressed with their musicianship, particularly the fiery guitar-playing from both band members on the punchy The Confession and Hannah’s jazz-influenced piano melodies on the hopeful Possibilities.

One thing which became clear throughout the performance was the relationship and chemistry between Abbe and Hannah. They frequently broke off to banter with each other in between songs, cracking jokes about Hannah’s driving and their instruments playing up, and it was lovely to watch how much they genuinely like performing together. Additionally, they regularly encouraged the crowd to join in on songs like the lively, bright toe-tapper In This Time and the joyful, rollicking Next Year with its ‘audience participation’ requirement on one particular lyric.

Towards the set the band introduced some of their new songs. The uptempo The Yellow Road brought out the edge in Hannah’s voice and featured some great imagery, challenging lyrics and huge notes at the end, whilst love song Every Time started off sweet and lilting before bursting into life. Meanwhile, Through The Night, about Abbe’s dad, was full of warmth and affection and had a lush, dreamy quality.

The pair brought their set to a close with The Voices, taken from their current album, which they performed with Samantics. It’s a passionate plea for mental health advocacy which pairs an upbeat melody with dark yet honest lyrics and has an almost choral feel. The song definitely had an impact and was a strong, powerful note to end the performance. After demands for an encore, Abbe and Hannah performed The Gift, which for me summed up the whole performance with a haunting intro before picking up into a high-energy performance and some belting vocals from Hannah. They got a standing ovation and it was definitely well-deserved.

Overall Sound of the Sirens showed why they inspire such a passionate fan base and why they’re definitely a band to watch. Their harmonies are absolutely stunning and their vocal styles complement each other beautifully, as well as being excellent musicians who really know how to bring their songs to life. Although some of the songs were a little similar to each other, they’re incredibly talented and really fun to watch as performers. I’m already looking forward to hearing the second album and to seeing them live again soon.

In this article:London Folk & Roots Festival, Sound of the Sirens