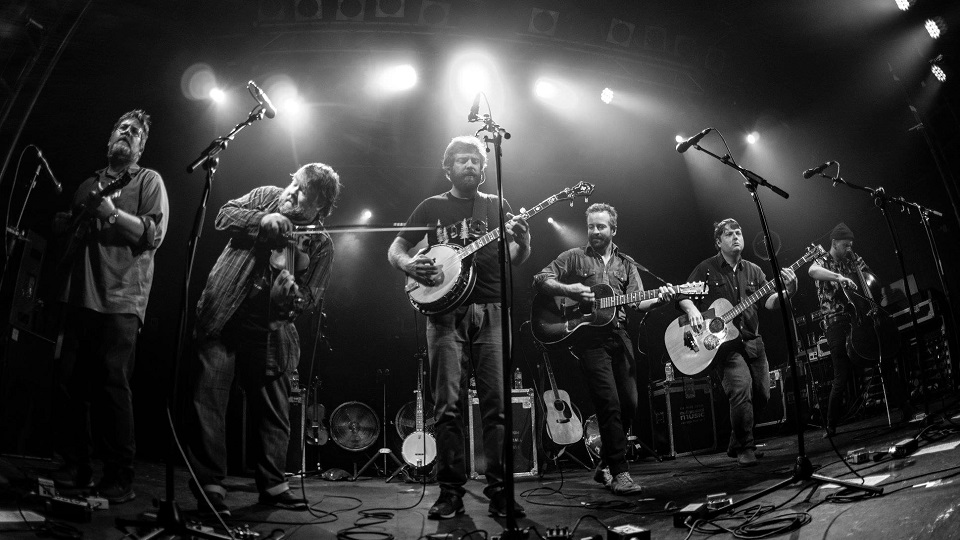 Six-piece bluegrass/folk-rock band Trampled By Turtles originally formed in Duluth, Minnesota in 2003. Since then they’ve released eight albums, including 2010’s Palomino which spent 52 straight weeks in the Billboard Bluegrass top 10 and their latest release, Life Is Good On The Open Road, which topped the chart earlier this year. Last night they rounded off their latest European tour at Camden’s Electric Ballroom, as part of the London Folk & Roots Festival.

The band arrived on stage to huge cheers and launched into We All Get Lonely from their latest album. It’s a bright, folky number with smooth vocals from lead vocalist Dave Simonett and a lovely richness to it. After thanking the crowd for coming out, they moved on to Annihilate, a lively and fast-paced song which featured rattling banjo from Dave Carroll and a passionate fiddle performance by Ryan Young, who at point was bent double as he played.

Whilst Trampled By Turtles mostly stuck to songs from the new record, such as the rocky, soaring The Middle and the rollicking I Went To Hollywood, there were plenty of songs from across their previous releases too. The likes of Alone, with its building layers of instruments, and the traditional vibes of Victory got roars of approval from the audience as well as inspiring plenty of people to dance!

One thing I was particularly impressed with was the individual members’ musicianship. For me some of the best moments of the whole show came in numbers like Truck and Midnight On The Interstate, where their fingers could be seen flying up and down the keyboards along with headbanging. Their willingness to go for it gave the set a real injection of energy and it definitely got the crowd fired up too. Honorable mention must be made of Young’s fiddle playing, particularly his impressive solo on the melancholy Thank You John Steinbeck, which complemented Simonett’s gravelly vocals really well.

A personal highlight of the set was Good Land. There was a real fieriness to the performance and a defiance in Simonett’s vocals, and I liked the sea shanty feel of the song. However, there were also some great slowed-down moments too. The acoustic Life Is Good On The Open Road put the focus on the band’s excellent harmonies, whilst the subdued, downbeat I Learn The Hard Way and stripped-back Empire were full of emotion and Darkness And The Light had a raw, affecting quality.

The band closed their set with Wild Animals, the title track of their 2014 album. It got a huge cheer from the audience, who were singing along from the off, and had a great anthemic feel to it. Simonett’s vocals had a clipped, sharp feel whilst Young absolutely shone, hoisting his violin over his head as he played. The crowd thunderously demanded an encore, and the band happily obliged with Wait So Long, which started off slowly before launching into a full-throttle performance.

Overall Trampled By Turtles ended their tour on a high and showed why they’re so loved by UK fans. They packed their set full of songs which showed off their traditional influences and outstanding musicianship and had a good balance between uptempo songs and slower numbers. However I felt the set took a while to get going and, whilst they had good chemistry together, they weren’t particularly chatty and I would have liked to hear more of the stories behind the songs. But they’re certainly remarkable performers and it’s great to see them leading the way for traditional music with a twist.