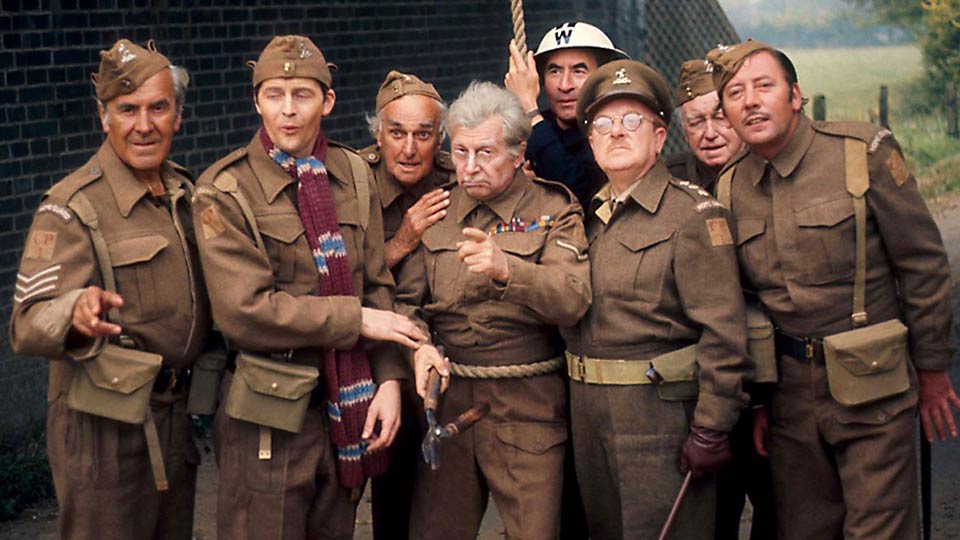 We all have favourite sitcoms that we love to watch and revisit. Something about the familiarity of the format that resets itself to zero for the start of each new episode makes for comforting viewing.

But sitcoms aren’t always just a distraction from the worries and pressures of everyday life. The better ones reflect the times they are made in, and make, however gently, a comment about the society around them. The great sitcom characters reveal facets of the human condition, and achieve this whilst also making us laugh.

What we now think of as the great British situation comedy started on television in the 1950s, but it took until the 1960s for the medium to really hone what worked well, and move away from the radio-style comedy format that often used multiple settings and dozens of characters. Sitcoms traditionally contained a handful of well-known characters within one or two central locations – and no more than that!

With Christmas coming up and the long nights ahead, it’s a good time to revisit a favourite sitcom of yesteryear, or consider a boxset as a gift. Here, we start the first of our series on British sitcoms with a top ten of greats that were aired, at least partially, in the 1960s. Enjoy!

The spin-off from The Army Game aired between 1960 and 1963, enjoying a brief recrudescence in 1974. Bootsie and Snudge follows the adventures of Alfie Bass and Bill Fraser as they return to civilian life following their national service (as seen in The Army Game). It’s also notable as providing an early outing for Clive Dunn (Dad’s Army’s Jack Jones) to play a decrepit old man – he was 38 at the time! One hundred of the original one hundred and four episodes still exist in the archives, and the sheer volume attracted notable talent to write them, including Jack Rosenthal, Barry Took and Marty Feldman.

Admittedly, the show was never especially sophisticated, and every episode feels largely the same as the last one, but there is something charming about the simple pleasures to be found in On The Buses, which ran from 1969-73. Unlike some of the cleverer comedies of the period, it hasn’t aged terribly well, and the production now feels cheap and cheerful, but there’s no getting away from the fact that it was a phenomenal success and enormously popular with the viewing public. Catchphrases such as “I’ll get you, Butler!” delivered by the inimitable Stephen Lewis, remain in the public consciousness today. Reg Varney was so big a star even before On the Buses that he was the first person to ever use a cash machine, unveiling the ATM to the public in 1967!

Father, Dear Father was one of the few comedy hits for ITV (Rising Damp in the 1970s, and Keep It In The Family in the 1980s were other rare successes). It ran from 1968 to 1973 and starred loveable British character actor Patrick Cargill in the lead role. With his clipped voice and precise mannerisms, Cargill often acted as a cut-price Laurence Olivier. The series was an early partnership for writers Brian Cooke and Johnnie Mortimer, who went on to pen the Richard O’Sullivan vehicles Man About the House and Robin’s Nest. Cargill starred as a divorced novelist, whose search for the quiet life is constantly interrupted by his daughters, ex-wife and other hangers-on.

The 1970s sequel, Whatever Happened to the Likely Lads? is much better-known, but eight episodes from the original 1964-66 series where we first meet Terry and Bob still exist in the BBC archives. The early black and white recordings demonstrate the clear potential of the series, and the writing partnership of Dick Clement and Ian La Frenais would go on to be regarded for quality sitcoms in the same breath as Galton and Simpson / Croft and Perry / Cooke and Mortimer. The series made stars of James Bolam and Rodney Bewes, though there would sadly be an infamous fall-out, and very different fortunes after the show for the two lead actors. But The Likely Lads is where it all began for several great talents.

In a way, The Liver Birds was the female version of The Likely Lads, though the setting moved from Newcastle to writer Carla Lane’s native Liverpool. Besides The Liver Birds, Lane is perhaps best-remembered for the 1980s comedy Bread. The Liver Birds (in reality the symbol of Liverpool, sitting atop the Liver Building) are played by Polly James and Nerys Hughes (who took over from Shirley Valentine-star Pauline Collins). It ran from 1969 to 1974 and gave leading roles to women, presenting a view of life for modern, single young women in the North West of England.

The appeal of the show was comic legend Frankie Howerd, who plays the lead role of the slave, Lurcio, who gets involved in various scrapes involving his social betters in Ancient Rome. Up Pompeii was inspired by Howerd’s humorous turn in A Funny Thing Happened on the Way to the Forum, and it ran for two seasons from 1969 to 1970, but is also remembered for a few specials and three film spin-offs of varying degrees of artistic merit. But Frankie Howerd was up there with Kenneth Williams for his over-the-top reactions to smut and suggestion, and his tour de force performance is the main factor in why Up Pompeii remains a much-loved sitcom.

4. Till Death Us Do Part

Not to everybody’s taste, and certainly challenging to the generations brought up to accept stifling political correctness as the norm, but Till Death Us Do Part, which ran from 1965 to 1975, was typical of writer Johnny Speight’s catalogue in that it straddled the thin line between presenting uncomfortable views and satirising them. If you’re able to not take mortal offence at the show, there is much to enjoy, not least Warren Mitchell’s superb comic creation, Alf Garnett. Besides the East Ender’s less than helpful views on race relations, Garnett also more usefully railed against socialism. How appropriate that his layabout socialist son-in-law was played by Anthony Booth (son-in-law of former Labour Prime Minister Tony Blair). Garnett was not the sort of character to rest in the public consciousness, and a sequel called In Sickness and In Health ran from 1985 to 1992. Sadly many of the episodes from the 1960s are missing from the archives.

This one’s a slight fudge to include, as the majority of its run was in the 1950s, but since its final season aired in 1961, it just about qualifies, especially since The Blood Donor, the episode that everybody still talks about, was one of the last to air. Tony Hancock’s melancholy creation has been immortalised in the public consciousness, and recent theatrical and radio adaptations of missing episodes show that fascination remains in his comedy creation, in part due to morbid curiosity about the troubled star who was his own worst enemy. In many ways, Hancock’s Half Hour sowed the seeds of British sitcom for the next two decades, thanks in no small part to the two brilliant writers who worked on the show – Alan Simpson and Ray Galton – who would go on to bigger and even better things…

Once Tony Hancock ill-advisedly gave them the boot, Alan Simpson and Ray Galton were freed up to write their own series. The result is one of the most iconic British sitcoms of all time – Steptoe and Son. Most of the series mentioned here are typically British in their approach to comedy, but none more so than this one. Many nations would be incredulous that laughter could be forged out of a situation where father and son live in dire poverty, where the son still dreams of a better life for himself, but remains shackled to a father he has grown to pathologically resent. Steptoe and Son drips with pathos in every episode. You feel desperately sorry for ever-hopeful, always-disappointed Harold Steptoe (a masterclass in acting from Harry H Corbett), and yet the manipulative, selfish, disgusting Albert Steptoe (Wilfrid Brambell) retains the audience’s sympathy on account of his vulnerability. Many episodes feature only the two lead actors, and are set entirely within the confines of one room inside their house, but Ray Galton and Alan Simpson were such brilliant writers that they make the scripts claustrophobic, and always full of conflict and simmering resentments. It became a staple of British television, running for over a decade between 1962 and 1974. Rag and Bone men may be a thing of the past, but they live on in Albert and Harold Steptoe, and their struggle to get on from one day to the next intoxicates viewers to this day.

What makes Dad’s Army so special is not just its longevity, both in terms of the near-decade it spent on British television (1968-77) and its enduring appeal to all age groups, but also the perfection of its ensemble cast, which was the key to its success. Never before or since has a situation comedy gathered together such a notable rollcall of talent, who were ideal for the parts they played, and good enough actors for David Croft and Jimmy Perry, the two writers, to craft their characterisations around. Dad’s Army also came at just the right time. It was only just over two decades since the end of the Second World War, during which the series is set, and the BBC had concerns it would be considered disrespectful to make a comedy out of such a dreadful time in human history. Real-life war footage in the original title sequence shocked and appalled members of the cast who had served for their country and lost friends in the conflict, and so it gave way to the animated titles we’ve all grown to love, overlaid with Bud Flanagan’s chirpy “Who do you think you are kidding, Mr Hitler?” song. Warm and nostalgic are two words to attach to Dad’s Army. Arthur Lowe and John Le Mesurier are spellbinding as Captain Mainwaring and Sergeant Wilson, and the class divide and constant tension between the two, exacerbated by their differences in height and weight. The eerily quiet scene in the sixth season, recorded immediately after James Beck’s death, when his character Private Walker was written out, demonstrates how close the actors were, and what a terrible loss Beck was, especially since he was one of the younger members of the cast. In truth, the final few seasons without Beck never quite lived up to the riotously funny opening six years, but the chances are, if you dip into any episode of Dad’s Army, there’s so much to enjoy. The cast alone make it special, and it’s impossible to tire of Clive Dunn’s intimation that, “They don’t like it up ’em.” In many ways, Dad’s Army defines what being British is all about. And it’s enduringly funny.

We will return with our top ten of British sitcoms from the 1970s.