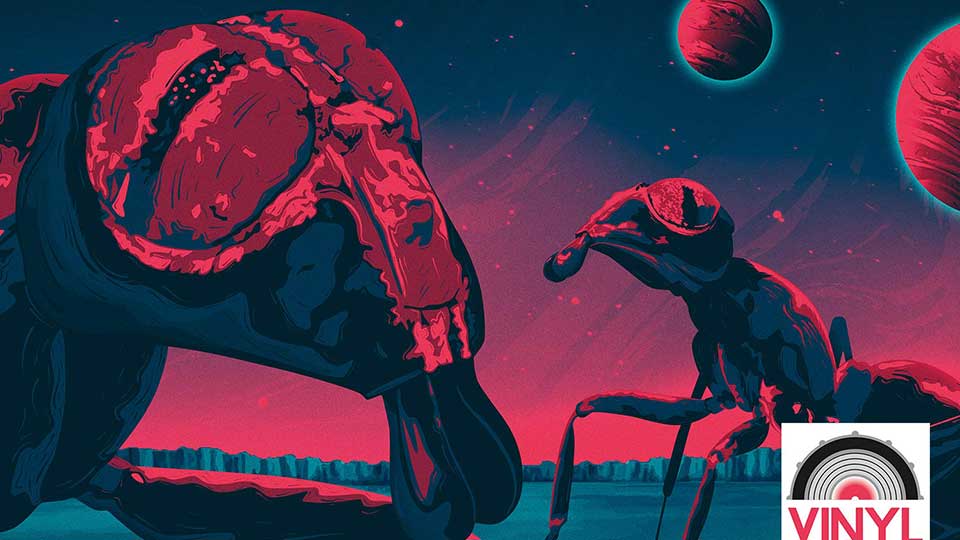 The Web Planet arrived in only the second full season of Doctor Who, originally airing in 1965. It is one of the first truly divisive stories: some fans love it for its breadth of imagination, pushing the show in brave new directions, whilst others find it almost unwatchable because of shoddy production values where a budget has been stretched well beyond breaking point by an overly-ambitious script.

Demon Music Group, which has released a wide selection of Doctor Who titles on vinyl, has now added The Web Planet to its catalogue. A new box set is available, containing three heavyweight 180g vinyls (one side per episode). The design work is up to the usual excellent standards that we have come to expect from this range, and depicts the menacing ant-like Zarbi of the planet Vortis on the cover.

Unlike previous releases, such as The Evil of the Daleks and The Daleks’ Master Plan, The Web Planet exists in its entirely in the BBC archives, and many fans will have the DVD in their collection. This special release – the first time that the Web Planet has been available as a soundtrack – has specially-recorded linking narration by Maureen O’Brien.

The plot is mildly chaotic, but it essentially follows the TARDIS crew as they become embroiled in rivalry between the ant-like Zarbi and butterfly-like Menoptera on the planet Vortis. A third alien species – the Animus – uses gold to control the minds of the other species. In depicting no other humans besides the TARDIS crew, but no fewer than three alien species, The Web Planet showed enormous ambition. The problems are that the budget couldn’t convincingly stretch to adequately translate writer Bill Strutton’s ideas to screen. The Zarbi are a touch cumbersome, and the Menoptera are, well, not the best-realised aliens the series ever offered.

The Web Planet stars William Hartnell as the First Doctor, with William Russell as Ian, Jacqueline Hill as Barbara and Maureen O’Brien as Vicki. The cast also includes the television debut of Martin Jarvis, an actor who would go on to considerable acclaim. Not only that, but he would return to Doctor Who to star opposite both Jon Pertwee (The Invasion of the Dinosaurs) and Colin Baker (Vengeance on Varos).

Besides the poor production values, another issue with The Web Planet is that the story isn’t always compelling. Aside from the TARDIS crew, it’s hard to care about any of the characters. This compounds the problem of the limited budget. Famously, an extra playing a Zarbi in an unwieldy costume clatters into the camera at one point. In an attempt to cover the cracks and make the alien landscape less obviously just a cheap set, director Richard Martin opted to smear a thin layer of vaseline on the camera lens, which lends the visuals a hazy quality. All in all, the distractingly tight budget can’t help but draw attention to a script that is over-stretched to fill six episodes.

Happily, the audio experience is much more pleasurable than watching the DVD. As a fan of the original series, The Web Planet is a story I seldom return to, because the poor visuals are an almost insurmountable obstacle to enjoying the story. Listening to it on warm vinyl, and allowing the imagination to set the scene, I realised that the story is much better than I’d remembered, and I got much more out of it. I still think it’s a long way short of being ranked with the all-time greats, but it is the first story in the series’ run that tried to do something radically different, and the production team deserves credit for that.

As always, the partnership between William Russell as Ian and Jacqueline Hill as Barbara, separated though they are for much of the serial, is the glue that binds everything together. It’s great to have Maureen O’Brien, best-known now as a novelist, back to lend her vocal talents to set the scene for the listener, and her involvement is an enticement for fans of the Demon Music Group’s extensive Doctor Who catalogue to add The Web Planet to their collection.

Overall, The Web Planet is one of those Doctor Who stories that is more pleasurable to listen to rather than watch, and as such, this release serves it well.

As with some previous titles in the catalogue, there are two versions available: the standard comes with deep red records, but an Amazon-exclusive has clear, blue and red splatter vinyls. The high production values with sturdy packaging, three 180g records and striking design work from Demon Music Group will be sure to impress Doctor Who fans.