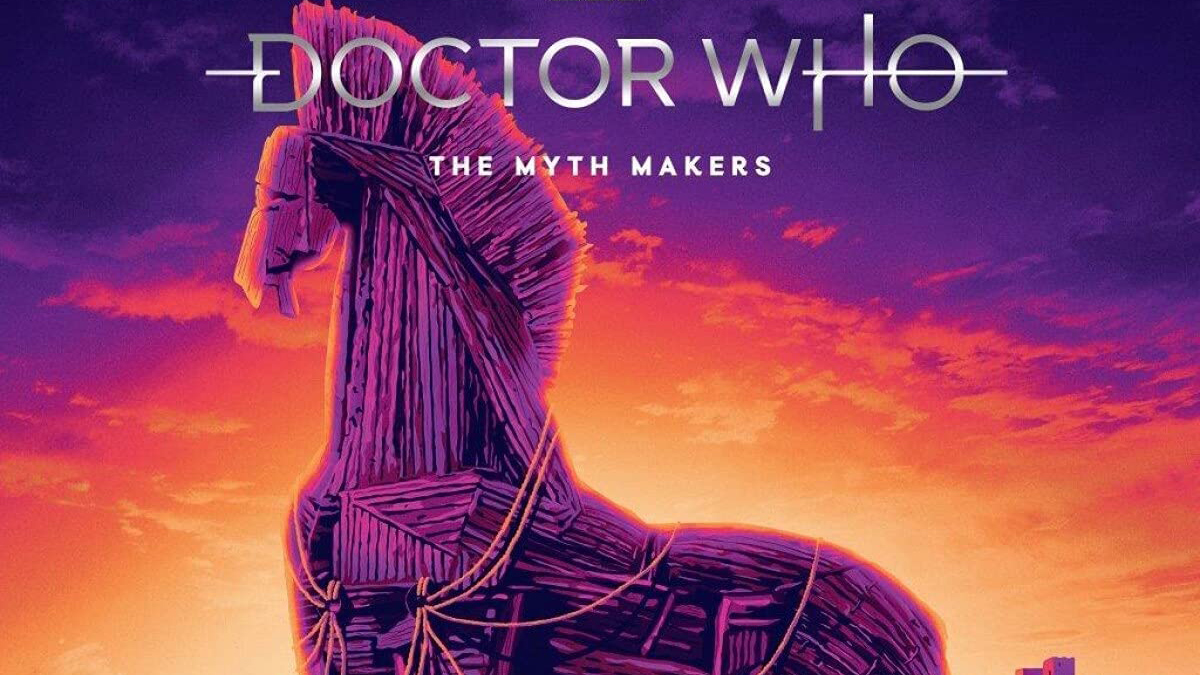 The latest ‘Doctor Who’ title to be given the vinyl treatment by Demon Records is ‘The Myth Makers’ starring William Hartnell as the Doctor, from the third season of the show. It was originally transmitted in 1965. Like a lot of stories from the black and white era, ‘The Myth Makers’ is incomplete. However, this story is badly hit, with no surviving episodes or clips held in the archives. Today, it survives only as a soundtrack recorded off-air.

With linking narration from Peter Purves, who played the companion Steven Taylor, it’s still possible to close your eyes and absorb yourself into the world of the story. Now on 140g vinyl, ‘The Myth Makers’ sounds better than ever before.

When ‘Doctor Who’ first began, there was a strong interest in presenting historical stories that would educate as well as entertain children. Over time and successive script editors, the historical stories fell from favour, and those that were produced favoured a more humorous, tongue-in-cheek approach. It is in this context that ‘The Myth Makers’ was commissioned, and new writer Donald Cotton delivered a set of scripts that were fun, witty and playful. There are some memorable puns (“whoa to the horse” being the most egregious example), but it stays the right side of descending into a full-blooded ‘Carry On’ farce. Donald Cotton would go on to contribute ‘The Gunfighters’, which also starred William Hartnell. Its take on the gunfight at the OK Corral divides opinion as to its merits to this day. But ‘The Myth Makers’ was the only attempt in the original run to delve into the legends of the Homeric epic poems. It recounts the conclusion of ‘The Iliad’, encompassing the Greek Odysseus’ scheme to use a wooden horse to infiltrate the Trojan camp and bring about the fall of Troy after ten years of war (no points for guessing who ends up giving Odysseus the idea).

In 1965, many children would have received a classical education and have been aware of the source material that ‘The Myth Makers’ was based upon. Over half a century later, it’s less clear that they would have that background knowledge, but ‘The Myth Makers’ is still an accessible adventure if entered into in the right spirit. As a classicist, I raised my eyebrows at the rewriting of Homer’s account on some crucial details, not least [spoiler alert] the death of Achilles. However, ponder the title for a moment, and by the conclusion of episode four, you fully understand what ‘The Myth Makers’ truly means. In the rather more serious 1964 story ‘The Aztecs’, the Doctor had insisted that the travellers observe but never interfere in human history. By the time of ‘The Myth Makers’ only one year later, outgoing companion Vicki (Maureen O’Brien) teams up with the Trojans and develops a romance with King Priam’s son Troilus. Disliking the name ‘Vicki’, the Trojans had already taken to calling her ‘Cressida’. An orphan from the 25th Century leaves the TARDIS to unwittingly become a part of Greek mythology! Not only that, but (as Shakespeare’s play attests) Cressida is hardly an inspirational heroine! Credit must go to Donald Cotton and the production team for being so audacious and inventive.

The performances in this story are great. William Hartnell would soon leave the part, and was apparently difficult on set during the making of it, but none of that carries into his performance. He seemed to have a genuine affection for Maureen O’Brien, and his sadness at seeing her leave is apparent. She makes the most of a memorable send-off and ensures that Vicki is a strong and well-loved companion. The big name guest actor is Max Adrian, who plays King Priam. A hugely successful stage star, Adrian was a founding member of the RSC and the National Theatre, and collaborated more than once with director Ken Russell on screen.

‘The Myth Makers’ is packaged in an attractive gatefold sleeve with inner sleeves for the ‘Trojan sunset’ orange splatter discs. The striking cover art chooses the iconic model work of the wooden horse, placing it on the plains outside the gates of Troy, with the TARDIS tucked neatly behind it. If you’ve never previously noticed just how good (if, like Cressida, unfaithful) this story is, then listening to it on vinyl is the perfect way to experience it.