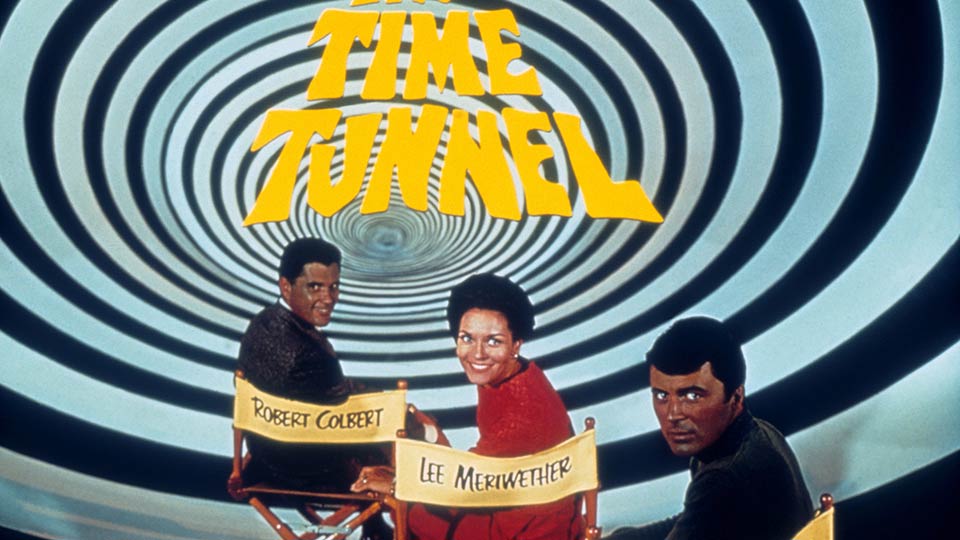 The Time Tunnel is a classic American science-fiction series from 1966. Conceived by Irwin Allen, The Time Tunnel has a first-rate premise for an action-adventure series, and it was clearly inspired by the space race, airing on screens only a few years before the moon landings. Capturing the air of optimism and pioneering American spirit of the 1960s, The Time Tunnel imagines the next frontier for mankind to explore – time itself! Now all 30 episodes are available in stunning high-definition Blu-ray for the first time.

The series opens in the Arizona desert. An American senator visits the top secret location of the Time Tunnel laboratory, where the ten-year government-funded Tic-Toc project is slowly progressing. Too slowly, for the politician, who threatens to pull the plug unless he sees some evidence of the machine’s ability to send a person through time and deliver them safely back again. Having dominated space, it’s time for the USA to dominate time. Hot-headed young scientist Dr. Tony Newman (James Darren) uses himself as a guinea pig, trusts the veracity of his life’s work, and throws himself into the machine…

The Time Tunnel is a bit like the Large Hadron Collider. You have to be fairly knowledgeable about the science to understand how it works, and this massive scientific experiment is conducted at great taxpayer expense underground. So it’s very relatable for a modern audience. A show that would borrow heavily from the concept twenty-five years later is Quantum Leap.

Once Tony Newman spins back through time, he finds himself on board a large ship in 1911. You’ve guessed it; it’s the Titanic (though oddly, an English passenger, played by Susan Hampshire, asks Tony after Roosevelt – but Theodore hadn’t been President since 1909 – a slight anachronism?) With the ship sinking, Tony’s slightly older, more level-headed colleague, Dr. Doug Phillips (Robert Colbert) opts to don an Edwardian suit and take a copy of the following day’s newspaper to convince the ship’s captain to change course or be consigned to the history books as a major player in a maritime disaster.

But, of course, we all know that the Titanic sank, so the question really concerns how Tony and Doug will extract themselves and survive to the next week’s adventure. This problem crops up a few times. Another episode called The Day The Sky Fell In finds our intrepid heroes caught up in the Japanese bombing of Pearl Harbour – during which Tony’s father was killed (the WWII-era Japanese return later for an episode set around the battle of Iwo Jima). In such episodes, a lot of screen time is expended on scenes in which Tony and Doug try to out-earnest one another with pleas of, “But you have to believe us – we’re from the future!” which inevitably fall on deaf ears. At times it feels as if the actors are serving the concept. James Darren and Robert Colbert are fine in the leads, though they are rather similar – straight-laced and serious. It’s a shame the glamorous Lee Meriwether didn’t play more of a leading role and take part in the adventures, stuck as she is behind the scenes in the laboratory.

The Time Tunnel has a B-movie feel, where each episode is introduced by an excitable voiceover, and each ends with a cliffhanger involving our heroes’ arrival at their next place and time. Such a formula works very well for the series, and each episode stands or falls on how good a self-contained story it can treat the viewer to. The premise is robust and adaptable, yet imaginary adventures, such as the second episode in which they arrive on board a rocket that is counting down to take-off, and another where they join aliens aboard a spaceship, are rare compared to historicals. From the War of 1812 (British history tends to overlook that minor skirmish), the eruption of Krakatoa, the French Revolution, the siege of Jericho and the siege of Troy, interesting periods of human history are favoured by the production team. Perhaps there was a remit to provide a sheen of educational quality to gain parental approval. It does require a suspension of disbelief to wonder why the scientists never land on a tedious bus journey, but perhaps we are only privy to the edited highlights of their time jumps.

In terms of production values, The Time Tunnel is excellent. The animated title sequence is stylish, and typical of the 1960s (of the kind that later inspired Mad Men). The Time Tunnel itself is a clever optical effect of circular black and white lines, though we could do without the damp squib fireworks that splutter into life every time the machine is used. Overall, though, the special effects are excellent. The opening episode’s tour around the Tic-Toc laboratory uses techniques invented by Fritz Lang some half a century earlier, but are brilliantly executed nonetheless. It also looks great in high-definition, and the picture quality is so clear that you can see the eyeliner on the actors’ faces. The restoration is immaculate.

The appeal on Blu-ray will undoubtedly be for those who adored the series on its original run, or who were young during the 1990s repeats (in the UK), as well as for nostalgia and 1960s buffs, who will certainly be satisfied. The seven-disc box-set offer collectors a heap of special features, including: