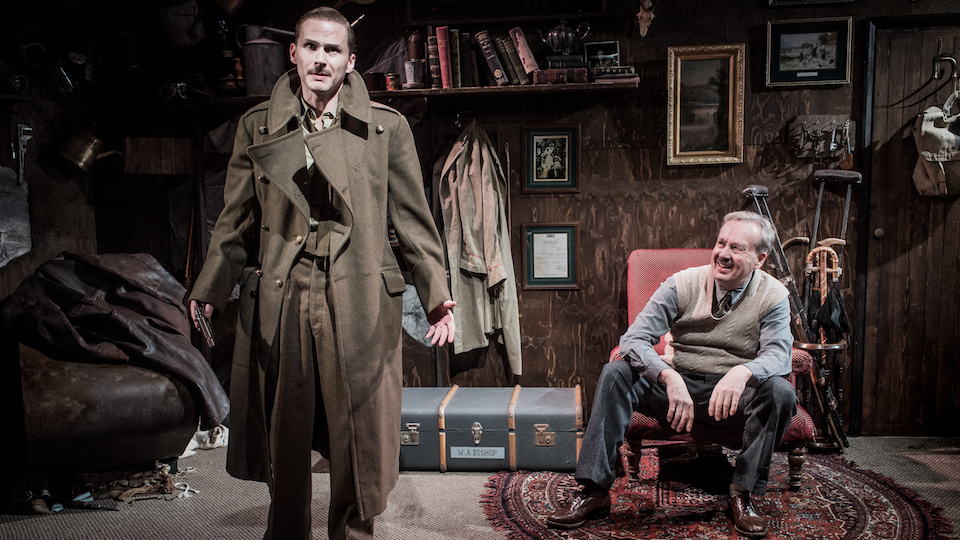 In 1914, Canadian Billy Bishop, then 20, signed up to fight in the Great War, as did many colonials across the British Empire. A failing and bullied student, Billy overcame many obstacles to receive his wings. Through a combination of bravery and sheer luck, Billy was able prove his worth, was credited with 72 victories and awarded a Distinguished Service Order, a Military Cross and the Victoria Cross for his accomplishments as a fighter pilot. Billy Bishop is a Canadian hero and yet, you may not have heard of him. As time raged on, triumphs in World War One became less celebrated and, rather, the focus on the pitiful waste of human life was lamented.

Billy Bishop Goes To War is a compelling true story which premiered in Vancouver in 1978, with co-creator Eric Peterson playing different characters alongside writer John McLachlan Gray on piano and vocals. The play remains a two-hander as it returns to London for the first time in over 35 years to coincide with the centenary of the Armistice.

In this revived production Charles Aitken shines with both talent and perspiration as the young Billy Bishop. The Jermyn Street Theatre is an intimate 70-seat venue, and it’s little wonder Aitken works up a sweat beneath the heavy, authentic costumes befitting our hero. With a further 17 parts to play, including plucky but ultimately tragic British fighter pilot, Albert Ball, and a high class comedy performance as snooty Lady St Helier who took Billy under her wing after he’d a spell in a London hospital. Over the two hours Aitken manages to bring wit, likability, vulnerability and pathos to Billy Bishop and his various companions. At first, the success of our legend seems rather unlikely given Billy’s cocky, lazy attitude. It’s pure chance rather than ambition that leads Billy to take the advice of a drunken pub patron and sign up to the Royal Flying Corps as an observer. Just how high he was set to soar couldn’t have been fathomed by anyone, least of all Billy himself, when he set out on the path war was to take him down.

Oliver Beamish co-stars as Older Billy Bishop, providing well pitched piano and musical accompaniment that adds to the mournful and jovial wartime atmosphere where necessary. Beamish gives an enjoyable performance but is not quite convincingly wistful when reflecting on Billy’s youthful escapades. Aitken steals the stage, understandably perhaps, seen as he’s got more lines and energetic roles to play. Still, Beamish comes into his own when utilised in aiding the retelling of tales as several other characters, drawing laughs as Lady St Helier’s aloof butler, Cedric, and as Billy’s superior officer.

A pleasing, if busy, set design combines with the cosy, compact theatre to really make us feel as if we’ve stepped into older Billy’s living room and back in time. Later, clever direction takes us inside Billy’s mind, envisaging the memories as clearly as he is. Indeed, we’re taken along for the ride as Aitken describes intense Dogfights while grasping the juddering control stick in a tiny cockpit situated stage left, draped in parachutes. Moving monologues, poignant poetry (take tissues!) and sympathetic songs of the era bring Billy’s experience of the war to life.

There are inevitable highs and lows as we follow the truth and tragedy in Billy’s story. As Billy’s blood-thirsty adrenaline rushes intensify the audience faces a real struggle between admiration for his achievements and the horror of the deaths each mission left in his wake. Don’t get me wrong, this isn’t a play that glorifies violence, but nor would it be easily palatable to a pacifist. Very dark humour and subject matter highlight the futility of war, the meaning of heroism and its cost in human suffering. At its heart, this play is a very human story of one Canadian who went beyond the call of duty to serve the Mother Country, and gives a rare insight into the colonial sacrifices made during the Great War. If you’re looking for genuine drama to honour the centenary of World War One, you won’t regret time spent paying your respects to Billy Bishop.