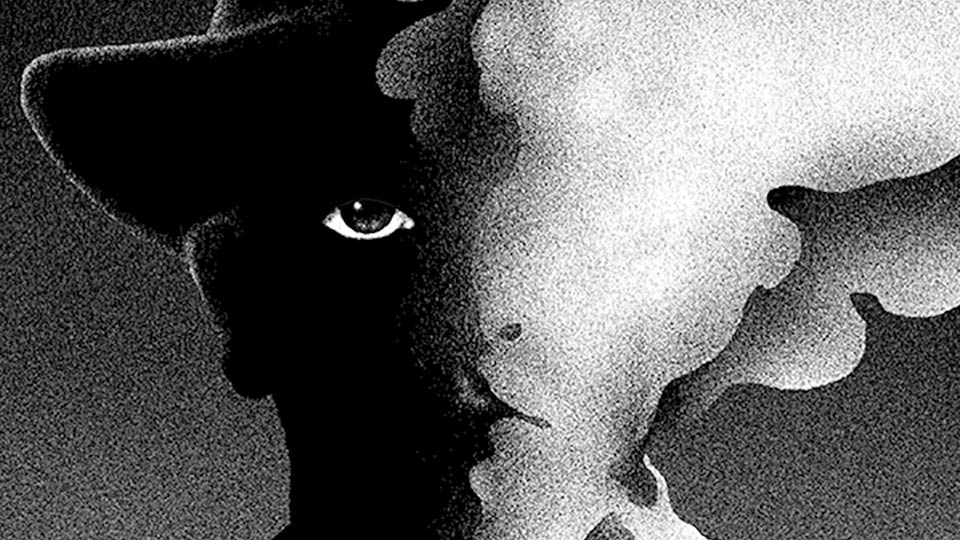 Max Löffler studied graphic design at the Design faculty of the Hochschule Darmstadt. His artworks have received lots of recognition, including a Silver ADC Award, a Joseph Binder Distinction and a Gold 3×3 Award.

In 2018, Löffler’s images for The Selected Adventures and Memoirs of Sherlock Holmes won the 2018 annual Book Illustration Competition, run by House of Illustration and The Folio Society. This gave him the commission to illustrate the full book, including the cover.

We caught up with Max to talk to him about his ideas for bringing Sherlock Holmes to life, what elements of Conan Doyle’s world he wanted to convey, and why eyes and eyeballs play such an important role in his work.

You received the commission for this book by winning the 2018 annual Book Illustration Competition. What feedback did you get from the judges, and did anything they said surprise you?

What the judges liked about my entry was that it was a fresh, contemporary take on the stories. They were particularly taken with my trompe l’oeil style, which creates optical illusions – like the curtain creating the shape of a woman in the illustration for ‘A Scandal in Bohemia’ [see below]. I was surprised and deeply honoured to have been chosen among all the talented artists who took part.

Once you had received the commission, what were your immediate thoughts about creating illustrations for further Conan Doyle’s stories?

I was quite worried about having trouble to come up with more illustrations as visually witty as the Irene Adler piece and hoped it wasn’t just a stroke of luck!

What medium or materials do you use to create the illustrations?

Though I did a lot of naturalistic and realistic crayon drawings in my earlier work, at the moment all my work is done in Adobe Photoshop with the use of some custom made brushes.

Eyes play an important part in the illustrations, both on the covers and inside the book. What was your reason for choosing that motif?

Eyes and eyeballs are a very common element in my work. For me it’s the best way to reduce a character to their visual essence, but at the same time an eyeball allows a lot of expression. For example, by placing a lurking pair of eyes in the dark you can create a mystic and threatening atmosphere immediately. It’s as simple as that… and as a detective’s job is to look for a solution, an eye seemed like a perfect translation of this.

Did any individual story immediately provoke an idea for an illustration?

Not in particular, no. I had to read a story several times, in order to be able to include a hint for the solution at the end of the case. I tried to combine several ideas that came to me in that process.

Were you familiar with the work of previous illustrators of the Holmes stories such as Sidney Paget? If so, did that familiarity inform any artistic choices you made?

I may have stumbled upon previous illustrators’ work during my research, but I didn’t keep their work super present, as I wanted to create a new perspective for the stories.

Did you base the profile of Sherlock Holmes or Professor Moriarty on anyone in particular?

Not on anyone in particular, but of course my vision of Sherlock Holmes already is influenced by several actors throughout movie and TV history!

You capture the darkness brilliantly, but what other aspects about the world of Sherlock Holmes did you most want to convey in your illustrations?

The illustrations carry a darkness for sure, but I also wanted to convey this very special atmosphere of wit and this almost cosy, sovereign feeling embodied by the character of Holmes. For me, cosiness is sitting in an armchair in the twilight of a chimney fire. Also, by incorporating optical illusions I tried to set a lighter, maybe even slightly humorous counterpart to this darkness.

What other projects are you working on now or in the near future that you can tell us about?

There’s a good mix on my plate at the moment: some editorial illustrations, a little band merchandise, a run of longboard decks and some clothing stuff for a surf film series. It’s keeping me on my toes!

Read our review of The Folio Society’s The Selected Adventures and Memoirs of Sherlock Holmes.

The Folio Society edition of The Selected Adventures and Memoirs of Sherlock Holmes by Arthur Conan Doyle and illustrated by Max Löffler is available exclusively from The Folio Society.