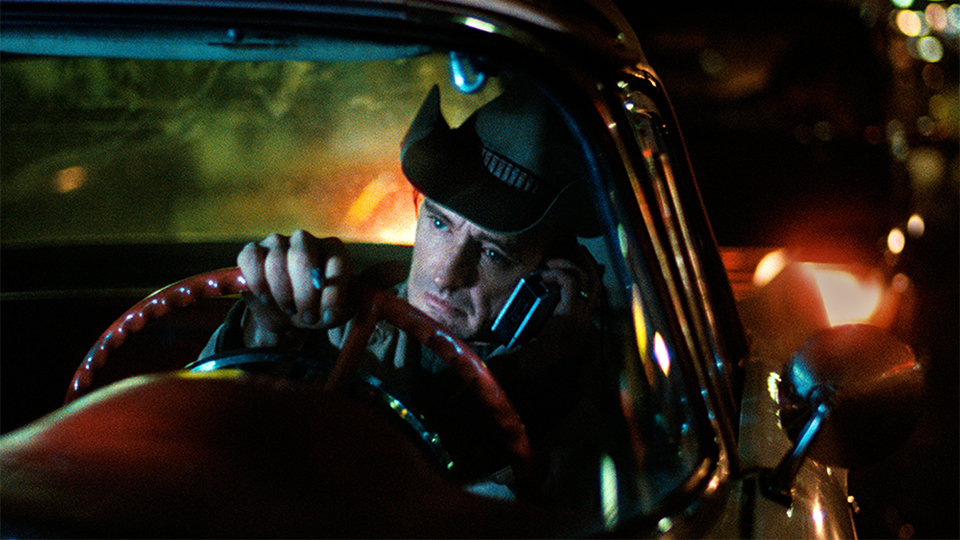 Tom Ripley is an anomaly on the docks of Hamburg. Rich, be-Stetsoned and oscillating wildly between rage and depression, it’s like he’s been transported to Germany from a distant planet. He has. From the planet Usa. By the mafia. Or something… Based on Patricia Highsmith’s novel Ripley’s Game, Der Amerikanische Freund takes such a detour from the fundamentals of character development and exposition that by halfway through it’s pretty much anybody’s guess.

A struggling picture framer, played by Bruno Ganz, has a rare blood disease and is bothering his doctors incessantly-frantically trying to convince his wife, his young son and himself that he is or is not dying. He crosses Ripley in a chance meeting and Ripley does not like it one bit, and so sets about exacting perhaps the strangest and most protracted retribution in 20th century fiction. Does Ripley ruin the protagonist’s life or does the protagonist ruin it on his own?

Director Wim Wenders says he prefers the absence of a concrete answer because it wouldn’t necessarily offer any comfort. There’s no neat Freudian psychoanalytic revelation of the exact origin of such arbitrary rancour-in Ripley-against such a clearly undeserving target. Bruno Ganz is amazing as Jonathan, a criminal so reluctant as to be virtually comatose. Dennis Hopper opposite, as Ripley, straight off the plane from the insane jungle meltdown that was the shoot of Apocalypse Now, basically phones in a trademark freak out.

The American Friend is supposedly an existential film noir. But film noir is inherently existential anyway, so I’m not sure that adding high notes of crushing dockside ennui with the chilly detachment of European auteur cinema was really a necessary gloss on the genre. What makes the protagonists tick is arguably much more mystifying and intriguing in ur-noir like They Live By Night, made in 1947 by one of the legendary directors also appearing as a character in this film, Nicholas Ray. Quite why Wenders populates the film with other directors, beyond some kind of in-joke aimed at film students, is more of a mystery.

The new 4k restoration, overseen by Wenders himself, pushes the saturation to the point where the early morning/evening oranges and reds that many of the scenes are shot in seem to go beyond the boundaries of the original film emulsion. I’m not sure that those colours were ever present on location, never mind in the original 1977 release. Cleaned and stabilised though, Robbie Müller’s Edward Hopper-esque compositions really shine.

Every film student the world over is required to spend at least a little bit of time at the altar of Wim Wenders. Paris, Texas. Wings of Desire. Buena Vista Social Club? You know? That guy. Outside the pages of Cahiers du Cinema, circles of fervent cineastes and the foyer of the Palais at Cannes though, is there still a sizeable audience who care? In the same way that Neighbours used to be on twice a day, people used to have such restricted entertainment options that they’d pay to spend two hours in a dark room which was at no point in any danger of being visited by visions of distended people in spandex underpants with physics-threatening problem-solving skills. The love for such esoteric craft work shown by this richly reverent re-release should justly be celebrated then, even if the underlying film is not especially gripping.