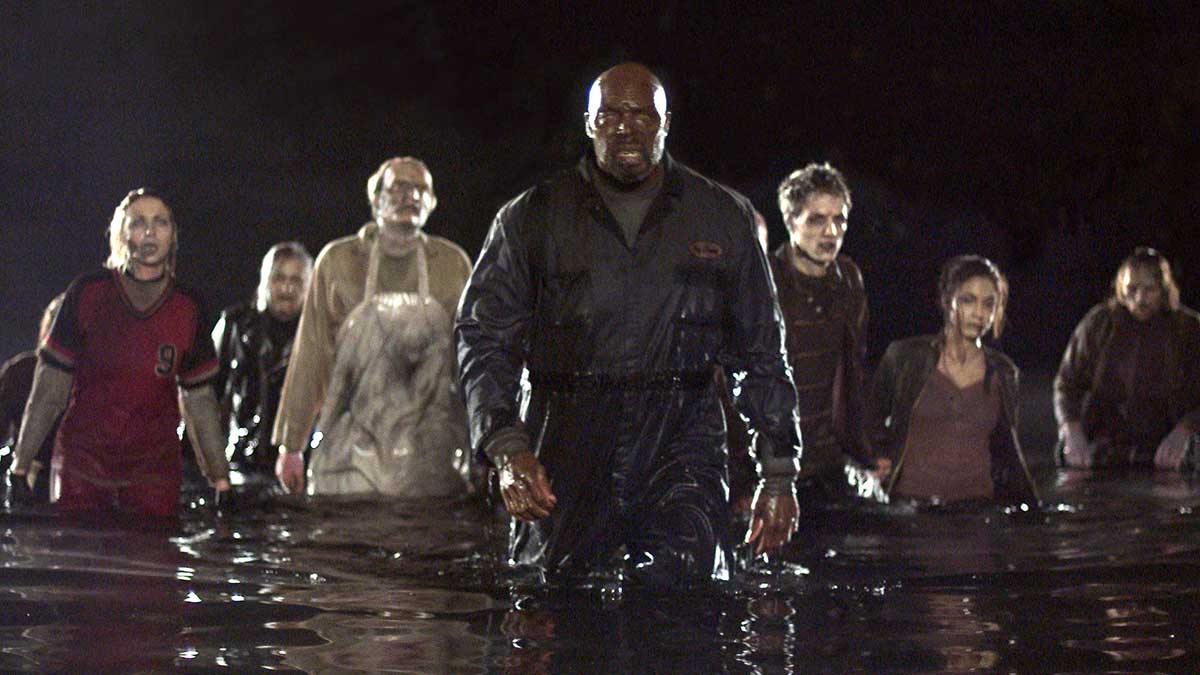 The zombie sub-genre within horror would never have been as popular or successful without the work of director George A Romero. Within his earlier films ‘Night of the Living Dead’ (1968) and ‘Dawn of the Dead’ (1978), he established many familiar tropes of the zombie genre that filmmakers now take for granted. His 2005 film ‘Land of the Dead’ turned out to be the fourth of his six ‘Dead’ films, which combine to make for a fan-favourite franchise all of their own.

‘Land of the Dead’ is a different proposition entirely to the earlier films. It’s made on a multi-million dollar budget, boasts established bankable names in the cast (notably Dennis Hopper), and makes the most of all the latest CGI and make-up effects. Zombies had never looked so horrifying before, and the blood-fest scenes had never been so gruesome.

The story has developed in a new direction in the twenty years since Romero’s previous zombie movie, ‘Day of the Dead’. The virus that causes the dead to reanimate and feast on the flesh of the living has mutated. Now, one zombie ‘Big Daddy’ (Eugene Clark) can reason, and he attempts to organise the other zombies into fighting back against the humans who are trying to wipe them out.

Meanwhile, human society has degenerated into varying states of elitism. A wealthy clique, led by Kaufman (Dennis Hopper) is sealed away from the threat of marauding zombies inside a pristine high rise, where luxuries are brought in by paid mercenaries, such as Debora (John Leguizamo). Others, like Denbo (Simon Baker) stay alive on the dangerous streets whilst looking for a safe route out of the city, where the plague is most widespread.

There is a lot going on in the film, which for the most part follows the adventures of Simon Baker’s character. In a nod to Mad Max, he teams up with Slack (Asia Argento) after saving her from fighting zombies in a ring for others’ entertainment. Along with his friend Charlie (Robert Joy), they try to keep out of the dangerous human politics and find their own route out of the zombie-infested land. With enemies both alive and undead, it’s easier said than done.

There are enjoyable treats thrown in for fans of Romero’s work and the zombie genre in general. Tom Savini, who made such an impression as the leader of the bikers in ‘Dawn of the Dead’, returns for a cameo. The creative talent behind the British comedy zombie film ‘Shaun of the Dead’, Simon Pegg and Edgar Wright, appear as zombies. Their film had been released the previous year to critical and commercial acclaim.

In the final analysis, though, despite having a lot going in its favour, ‘Land of the Dead’ doesn’t quite coalesce into a satisfying and self-contained instalment of the ‘Dead’ franchise. There are a number of reasons for this. Firstly, it lacks the coherence and character development of Romero’s undoubted masterpiece, ‘Dawn of the Dead’. There are too many characters and settings, and over a short running time (just over 90 mins), a lot is left under-developed. There is a feeling of inevitability about how the story will play out, which sets up a level of expectation that the climax doesn’t quite fulfil. Some of the characters never feel like anything other than cardboard cutouts. Dennis Hopper is uncharacteristically restrained in his performance, but his baddie Kaufman is meant to represent the vicious face of elitism and capitalism, and in the end comes across as a cartoon villain. The dollar bills going up in smoke is satire layered on so thickly as to be risible (especially when delivered through the medium of a Hollywood movie, where everything revolves around money). And is the sentimental final scene remotely credible?

It’s a matter of personal taste, but I also prefer the simplicity of the blue zombie make-up from ‘Dawn of the Dead’. It’s horrifying because it’s so familiar yet so alien. The sophisticated make-up of ‘Land of the Dead’ can’t help but draw attention to its artistry – and in so doing, some of the illusion is lost. Perhaps that’s just me.

Despite its flaws, ‘Land of the Dead’ is an entertaining zombie picture that is executed with a lot of visual flair by a highly imaginative director. It doesn’t waste any time, but moves through the story at breakneck speed, with plenty of scary moments along the way. If you’ve never seen it before, it’s well worth a viewing. It lacks the roundedness and subtlety of ‘Dawn of the Dead’, which is a film I find I can watch over and over again, unlike this later sequel.

This Blu-ray release from Fabulous Films comes packed with extra features, including an alternative ‘unrated’ 96-minute cut of the film and attractive cover art by Graham Humphreys. Fans of the work of Simon Pegg and Edgar Wright (‘Shaun of the Dead’) will enjoy the segment that follows their journey from Britain to Toronto to play zombie extras in a scene in ‘Land of the Dead’. There are two commentary tracks, one with George A Romero and editor Michael Doherty, and another with four zombie performers. There is plenty of behind-the-scenes footage featuring interviews with the principal actors and crew. Special effects has its own segment, and another extra feature reveals how much of the film was shot using green screen, with computer-generated backgrounds layered in during post-production.