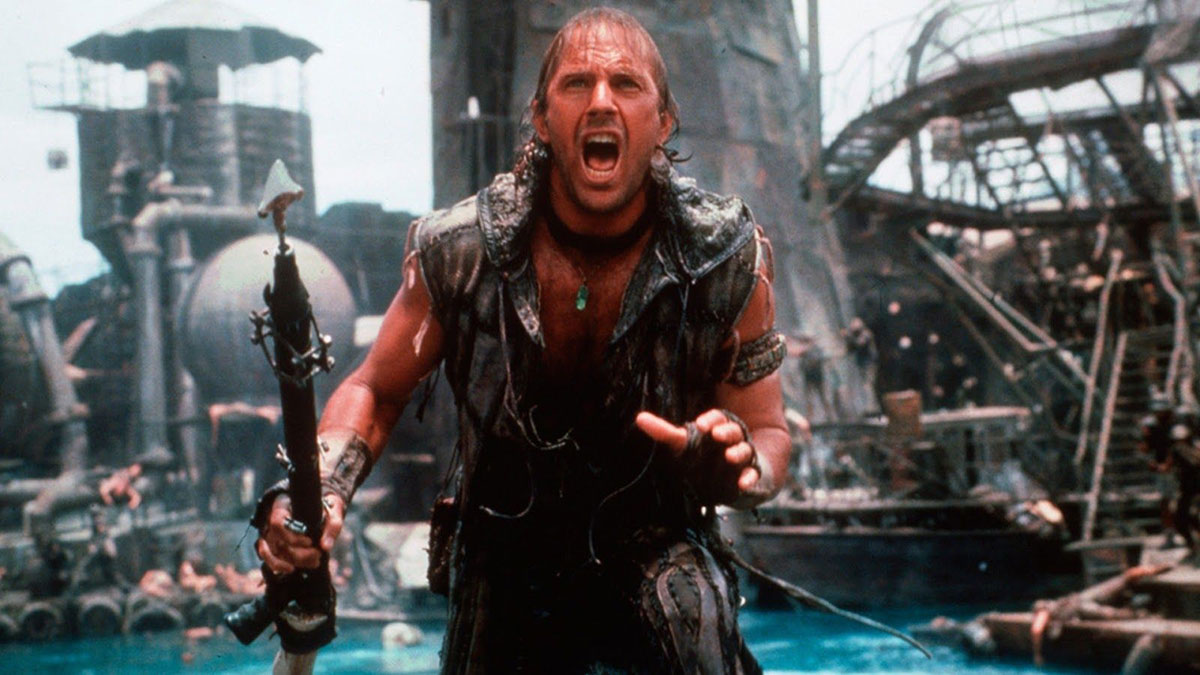 Set in 2500, ‘Waterworld’ depicts a world that is underwater due to rising sea levels after the polar icecaps have melted. Lone drifter The Mariner (Kevin Costner), arrives at an atoll (a floating community) to trade dirt and after they discover he’s a mutant, they lock him in a cage. As The Mariner tries to break his way out, the atoll is attacked by the Smokers, a gang of pirates led by Deacon (Dennis Hopper), who are looking for a little girl named Enola (Tina Majorino), who has a map to dryland tattooed on her back. With the help of Enola’s guardian Helen (Jeanne Tripplehorn), The Mariner and Enola escape but they are pursued by the Smokers.

‘Waterworld’ had a very rough time when it was released in 1995. With a budget of around $175 million (that escalated from $66 million), the film was considered to be an expensive flop after performing poorly at the box office. It was completely mauled by the critics but the film did eventually make its money back thanks to its home entertainment release and tie-ins for rides and video games. So 25 years on, did ‘Waterworld’ deserve the level of hate it received?

I remember seeing the film at the cinema in 1995 and thinking it was actually pretty good so I was very interested to see if that opinion was because I saw it as a young child or because it wasn’t as bad as people made it out to be. Fabulous Films are releasing the film on DVD so I jumped at the opportunity to see it again, and honestly my original opinion of the film hasn’t really changed.

Let me start by saying that ‘Waterworld’ isn’t a brilliant film but it also isn’t the disaster it was made out to be. Running at 129 minutes in length, the film has lags thanks to a thin plot that’s stretched too far, but there are also plenty of moments to enjoy. Kevin Costner’s performance as The Mariner is moody and at times quite brutal. The way the character behaves towards Helen and Enola is actually quite shocking, and if the film were made now I’d wager he’d treat them a lot better.

Some of the special effects have aged badly and there are some hokey moments, but overall when the action kicks in, ‘Waterworld’ is pretty tense and gripping. The initial action sequence when the Smokers descend on the atoll is thrilling as Helen rushes to save The Mariner from drowning before they flee with Enola to safety. Jeanne Tripplehorn and Tina Majorino are very good in their respective roles, and while the chemistry may not quite be there with Costner, the trio still gel well enough for you to enjoy their interactions.

Dennis Hopper was likely phoning it in as Deacon but he always made a good bad guy. He’s not required to do much here other than gurn and snarl at the camera, but it works in the context of the film. ‘Waterworld’ doesn’t really have any depth so the two-dimensional characters won’t bother you too much.

‘Waterworld’ is at best a brainless popcorn flick that has some cool action sequences to keep you entertained. It could have been shorter and the plot could have been more fleshed out but overall it’s a solid enough film. If you’ve never seen it, you probably should because it’s nowhere near as bad as the critics would have you believe and if, like me, you saw it back in the 90s then now’s a good chance to revisit it.