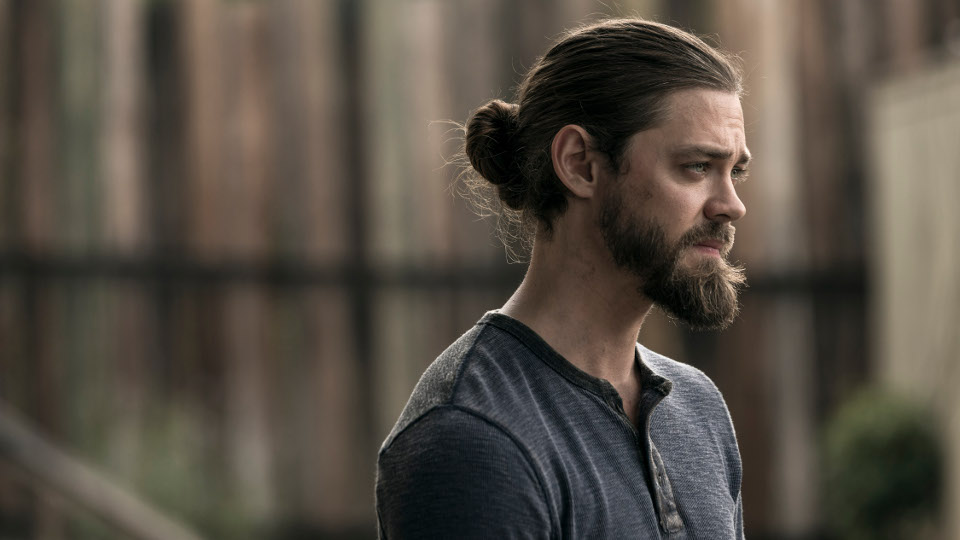 In the latest episode of The Walking Dead, the communities came together to try and rebuild the damaged bridge.

The episode took place about a month after Maggie (Lauren Cohan) had Gregory (Xander Berkeley) hung for trying to kill her. The communities had come together and were working hard on fixing up the bridge. Ezekiel (Khary Payton) explained to Henry (Macsen Lintz) the importance of the bridge.

Rick (Andrew Lincoln) was concerned to hear that Saviours were disappearing and no one knew how or why. One group that went missing was on a trip to deliver the fuel they made to Maggie in exchange for food. They never arrived so Maggie was refusing to release the food because she needed it to power the tractor at Hilltop. Without it they couldn’t plough the fields and the option of doing it manually with horses required the help of a blacksmith. Her only blacksmith was Earl (John Finn) who she currently had locked up for attacking her.

During the bridge repair, Henry was tasked with sharing out water amongst the workers. He gave some to Justin (Zach McGowan) who demanded more and snatched the barrel for himself. Annoyed, Henry used his stick to swipe him off his feet. Justin decided to retaliate but Daryl (Norman Reedus) stepped in and gave him a beating. Rick stopped the fight much to Daryl’s annoyance.

Later, Daryl took Rick to one side and questioned if they were still on the same side. Carol (Melissa McBride) sympathised with both sides of the argument and realised that those in Sanctuary might just not be ready to live with everyone just yet.

While Rick worked on the bridge, he had Michonne (Danai Gurira) pay a visit to Hilltop to work on Maggie. She found a very standoffish Maggie and but tried to push for a common set of laws for the communities. Maggie was also preventing Tammy (Brett Butler) from seeing her husband but Jesus (Tom Payne) had a word. She decided to change her mind and let Tammy see Earl. Afterwards she had a chat with Earl and decided to give him another chance and let him free to work but under supervision. Maggie also gave in on holding back the supplies for the bridge workers.

The bridge workers pushed on with their repairs while Rick led an operation to divert a Walker herd away from them. Something went wrong and the herd ended up attacking the bridge workers. Daryl started fighting them off while some of the workers fled. In the chaos a pile of logs collapsed and trapped Aaron’s (Ross Marquand) arm. Daryl tried to free him as the herd attacked and Rick, Carol, Ezekiel and more arrived to fight them off. Rick shot the holding ropes from one pile of logs which collapsed and crushed a large number of Walkers.

They finally managed to free Aaron but he was in a bad way as his arm was completely crushed and broken. At the construction workers camp, Enid (Katelyn Nacon) was tasked with helping Aaron as she had been learning medicine from Siddiq (Avi Nash). Her only option was to amputate the damaged limb. A furious Daryl held Justin accountable and gave him another beating before Carol stopped him. Rick decided the only option was to banish Justin.

Elsewhere in the episode, Gabriel (Seth Gilliam) and Anne/Jadis (Pollyanna McIntosh) became close and even shared an unexpected kiss. She later spotted the mysterious helicopter again which seemed to be spying on them. Meanwhile, Rick updated the incarcerated Negan (Jeffrey Dean Morgan) on how wonderful everything was going despite having a bad day. Negan posed a question, was Rick saving the world or just getting it ready for his return?

At the end of the episode, a very drunk Justin walked away from camp. He heard a noise and went to investigate. He was abducted by an unseen person, but who was it?

Can’t wait for the next episode? Read our preview of The Walking Dead – 9×03 Warning Signs.