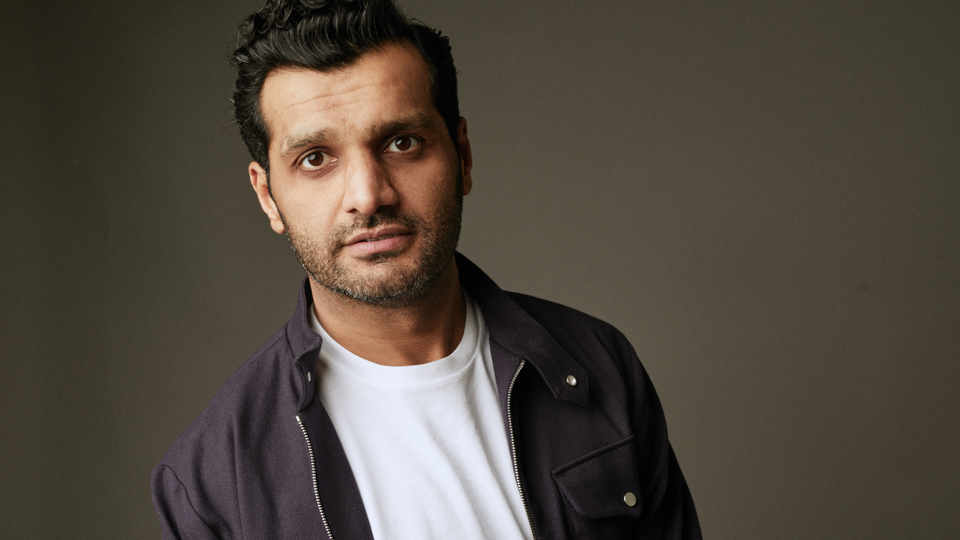 Peter Singh has been a familiar face to many as his career has grown steadily on stage and screen. Working his way up through the industry, his diverse CV includes credits such as the new Rowan Atkinson action-comedy Johnny English Strikes Again, which is in cinemas now.

Check out our review of Johnny English Strikes Again.

His next feature, the BBC Films/BFI co-production Mari, is due to premiere on 18th October at the BFI Southbank. An authentic and character-driven family drama, Mari is an honest and relevant film about women and the choices they make in an age where they are told they can and should ‘have it all’.

After Mari, Peter also has feature films The Flood, centred around the refugee crisis, and Armando Lannucci’s The Personal History of David Copperfield alongside Dev Patel and Peter Capaldi, in which he plays Mr Tungay, the role made famous by Sir Richard Attenborough.

We chatted to Peter to discuss his career thus far and his views on the current climate of the film industry.

Johnny English Strikes Again is in cinemas now; tell us about working on that project.

It was such a fun gig to do. One of the cool things about this job is when you get to work with people you’ve grown up admiring. So the opportunity to work alongside the legends Rowan Atkinson and Emma Thompson was hard to turn down. I’ve only a cameo in it. I play a bloke in the navy, Officer Kohli, who spends his days manning the radars in a submarine. He spots a ‘suspicious object’ hurtling it’s way towards London and needs to make some pretty quick-fire decisions on whether to respond with his own ballistic missile attack… It’s pretty nail biting stuff, but given that Agent English is also on the case its pretty hilarious too.

You have a new movie called Mari out soon, which is going to premiere at the BFI Southbank on 18th October. How did you first get involved with Mari?

I got involved after reading the script and meeting the director. I loved the honesty and originality of the storytelling. The film explores some very relevant themes, particularly in terms of the choices women have to make in an age when they’re told they can “have it all”, career, kids, family… and the film takes a very honest look at that ideal.

It’s about a young dancer, Charlotte, who’s on the verge of huge success in her career when she’s hit with two major bombshells: Her beloved grandmother, Mari, is terminally ill and has days to live. On top of which she finds out she’s pregnant.

The film follows that classic pressure cooker environment when a family that’s been somewhat estranged for years are forced to live together and come to terms with some long buried issues. I play Rohan, married to Charlotte’s sister Lauren and father to their four year old son. He loves his family and all the chaos that comes with it. But they’re struggling to have a second child and a string of miscarriages has left him feeling helpless and out of place in his marriage. He finds a renewed sense of purpose on becoming Charlotte’s confidant. So his allegiances get caught between his wife and his sister-in-law. Needless to say, it all kicks off.

I’m so proud of this film and it was such a special experience making it. We filmed it on a relatively tiny budget at the start of the year in deepest darkest Dorset, and for it it be picked up as part London Film Festival’s official selection and get such great recognition is just fantastic.

How do you see the British-Asian movie scene today? Are there more opportunities opening up?

To be honest, I’ve never really thought of my career in terms of a British-Asian movie scene. I just want to see a more truthful representation of the Britain I live in up there on screen, with all its complexity. But to answer your question: Yes. There are absolutely more opportunities and things are certainly changing for the better. But, there is a long way to go. I think recent events have revealed very plainly and painfully how a select handful of people control opportunities for the rest of the film work force. And that is where the change needs to happen.

I was very fortunate at the start of my career to benefit from training and mentoring programmes, but unless we change who makes the decisions, or the tastes of those gatekeepers, we’re fighting an up hill battle.

You’ve worked on numerous big productions now such as Alan Partridge, Hampstead and Disney’s Christopher Robin; does the scale of the project demand a different preparation from you as an actor compared with smaller budget movies or TV?

Preparation is everything. But my prep is determined more by type of role I’m playing as opposed to the budget or what the medium is. It starts from day one. There’s something almost sacred about opening a script and discovering a story and your character for that first time. I’ve no fixed process- I’ll take from everyone and anything that inspires me, but that first read tends to reveal a lot about the preparation I’ll need to do.

Was there room for much improvisation on the films you’ve worked on so far, and as an actor, do you like to put your own spin onto things?

I love improv. Whether the project allows for it or not, i always approach a script with a sense of improvisation. By which I mean, I like to get to the point where I’ve learnt the lines to the extent that it feels like I’m improvising it. And I’ll prepare the character and come with ideas so that if improvisation was required, I could drift right into it. Most directors I’ve worked with are open to improv. Why wouldn’t you be? Good improv is about being real, in the moment, letting go, and owning the part… for me they are also the qualities of good acting.

What have been the biggest challenges you’ve encountered in your career thus far?

The challenges are constantly changing. The biggest perhaps was taking that first step into the perilous world of ‘being an actor’. Those first few years were pretty tough. But a lot of fun too, because I was learning so much and meeting amazing people. Still am.

Do you have a preference between stage and screen work, having worked extensively in theatre and TV already?

Nope. No preference. It just comes down to the individual project and the character I’m playing. I’ve been focusing on TV and film for the last couple of years and I’m really enjoying the variety of work I’ve been able to do recently. But my background is theatre and I am itching to get back on stage… just need the right play and the right part.

Tell us about your upbringing in Bradford. Was acting always on your radar, and how much of a challenge was it to break into such a tough industry?

Aye, i’m a Bradford lad, born n bred. There’s nothing showbizzy about my upbringing at all and it felt like a million miles away from this industry. But yes, I guess I’ve had the acting bug since as far back as I remember really. It just took me 30 years to muster the courage and admit to myself this is what I want to do for the rest my life.

The biggest challenges were all internal – still are – but once I took that first step into acting, things started happening pretty quickly. I was incredibly lucky starting out with certain theatre companies taking me under their wing and I was able to train on the job. It is a tough industry and there are constant challenges, not least, just trying to earn a decent living from it. But somehow, I’ve managed to make it work. Touch wood.

Strong female characters are desperately needed onscreen, now more than ever. What do you make of the current shift in the zeitgeist taking place right now, and have you noticed a difference in the industry (from your standpoint)?

The revolution is happening people! Join in. Yes, I’ve noticed a very positive shift in the zeitgeist. Some of the best television I’ve seen this year is female-led drama- from Killing Eve, The Handmaid’s Tale, Big Little Lies… That myth that audiences don’t watch female led drama has been forever exploded. But still, theres a long way to go..

We are particularly interested in one of your upcoming jobs on Armando Iannucci’s The Personal History of David Copperfield, starring alongside Dev Patel and Peter Capaldi. You play Mr Tungay, a role made famous by the late Sir Richard Attenborough. Can you tell us anything about that movie?

I’m so excited for people to see this! Armando’s one of my comedy heroes and to work with him on such a prestigious film was just a joy. Unfortunately, it’s all very much under wraps so there’s little I’m allowed to say at this stage. But, it’s Charles Dickens’ David Copperfield, the story you know and love, but with Amrmando’s particular brand of genius mixed in.

A lot of people are talking about the casting, not only because it’s a completely stellar line up, but also because its totally colour blind. You’ve got Dev, who’s just incredible in this, playing David, Tilda Swinton is his Aunt Betsy and me playing Mr Tungay, who, as you correctly pointed out, was played by Sir Richard back in the 70’s. I’ve never seen this done before where you take one of the most loved books in English literature, stay true to it, set it in Dickensian times, but you have a cast that looks like modern Britain telling that story. I think it just adds another layer of brilliance to it and makes this epic story so much more immediate and relatable.

What other future projects do you have on the horizon?

I’ve got some cool stuff coming out in cinemas later in the year, including The Flood staring Lena Headey. A very powerful and pretty unflinching depiction of the current refugee crisis.

In the completely opposite direction, I start work next week on The Night Zookeeper, a new series for Sky Kids based on Joshua Davidson’s popular series of children books. I’m voicing the duel roles of Mr Fisher and Professor Penguin who’s kinda like a Mr Williams/ Captain Hook in Peter Pan kinda deal. I’m a huge fan of animation and they’re really fun scripts. Can’t wait to get stuck in.

Peter Singh’s latest film, Mari, will premiere at the BFI London Film Festival on the 18th October. Also look out for him as Mr Tungay in the new adaption of The Personal History of David Copperfield, directed by Armando Iannucci.