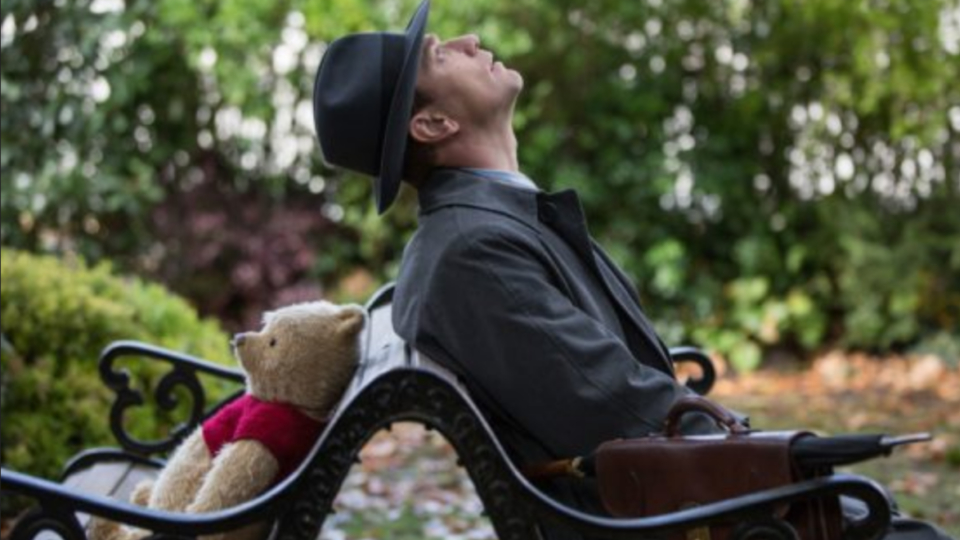 The affectionate legacy of Winnie the Pooh is explored in Disney’s latest big screen family adventure. Taking clear cues from the beloved Paddington series of movies from Studiocanal which have struck a real chord with audiences around the world, Disney now bring Pooh and his friends to vivid life thanks to some remarkably effective CGI. But surprisingly, it’s the narrative that falters in a film that has undoubted charm, but has a crisis of identity in how best to portray its uneven story.

Goodbye Christopher Robin came out earlier this year and explored the life of author A.A. Milne, and the tragedy that helped him create Winnie the Pooh. Anyone who saw that movie saw how the books eventually drove a wedge into his relationship with his son, the inspiration behind Christopher Robin. Disney’s film explores the character of Christopher Robin, not A.A. Milne’s life; however there are aspects that take inspiration from the real world.


The first alarm bell rings with the opening montage of the film. It covers a remarkable amount of story (some of which I’d have much rather see explored in-depth onscreen). We see the young Christopher Robin play with his beloved friends Winnie the Pooh, Tiger (both voiced by the legendary Jim Cummings), Eeyore (Everybody Loves Raymond’s Brad Garrett), Piglet (Nick Mohammed), Rabbit (former Doctor Who Peter Capaldi), Kanga & Roo (Sophie Okonedo & Sara Sheen) and Owl (Toby Jones).

The montage continues as Christopher Robin (Ewan McGregor) moves away for school and college, and meets a sweetheart named Evelyn (Hayley Atwell). They eventually get married and are expecting their first child when Christopher gets drafted into the army. He fights for his country, returns home a few years later to meet his daughter for the first time, then gets a civilian job at a luggage company and loses that spark of magic and wonder from within, turning him into a man who works endlessly and who doesn’t seem to like his life very much. All of this is banded together in about 10 minutes of screen time and it was far too much story to gloss over so flippantly.

The main crux of the film then starts, and finds the adult Christopher having a surprising encounter with Winnie the Pooh who magically appears in London. He reluctantly returns to his former childhood home to return Winnie the Pooh to the Hundred Acre Wood and help him find his missing friends – and in the process learns some valuable life lessons whilst reconnecting with his past.

There’s a sadness bubbling throughout the film that affects the flow of the story and it makes certain aspects of the narrative feel incompatible. But when it wants to be, Disney’s Christopher Robin is very charming too. All of the scenes between Pooh and his friends are so sweet and beautifully brought to life, with a tangible softness that will make you want to reach out and touch the screen. Ewan McGregor is always watchable and he does a good job, as does Hayley Atwell (who should have been used far more). Mark Gatiss plays token villain Giles Winslow with suitable aplomb and there’s a funny cameo scene featuring Brit comedy gems Matt Berry, Mackenzie Crook and Simon Farnaby.

Disney’s Christopher Robin is an enjoyable film for the most part and there’s plenty to laugh at. Jim Cummings brings a warmth and sweetness to Pooh every time we see him onscreen and is the main highlight of the film – especially Pooh’s hilariously innocent reactions to the real world. The film would have benefitted a lot more from playing up to the ‘fish-out-of-water’ scenario rather than focusing too heavily on the reconnecting of Christopher to his childhood. It would have made a more entertaining and engaging movie, especially to children. That said, there’s enough here to warrant a watch. Perhaps a sequel can be allowed to have a little bit more fun, rather than be weighed down with emotional baggage.