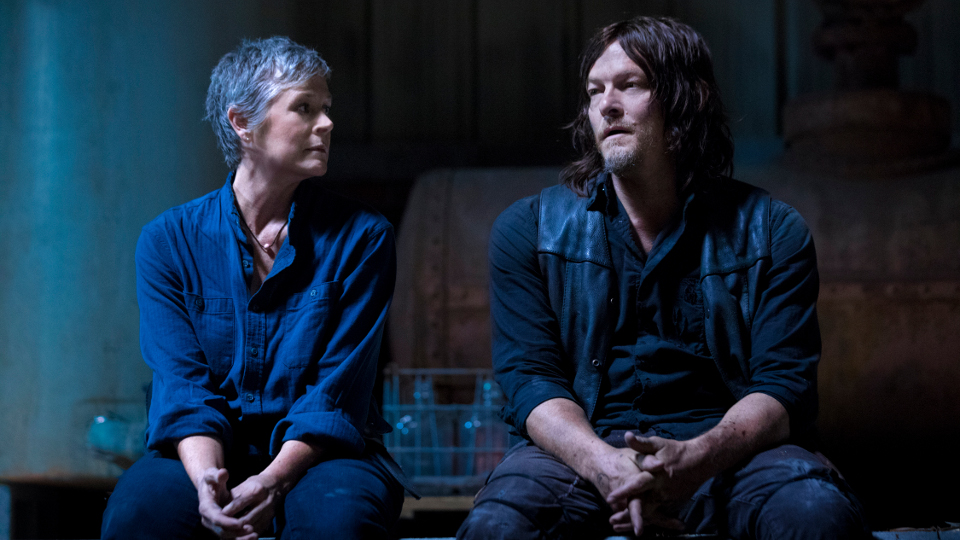 In the season 9 premiere of The Walking Dead, Rick (Andrew Lincoln) and his group made a run into Washington D.C.

Set some 18 months after the end of All Out War against Negan (Jeffrey Dean Morgan), the season 9 premiere opened up by giving us a glimpse of what Rick and the other survivors had been building.

They’ve been busy but things are different now as Rick’s core group finds themselves splintered across the various communities. Rick and Michonne (Danai Gurira) are running Alexandria while Carol (Melissa McBride) is helping Ezekiel (Khary Payton) run the Kingdom. Daryl (Norman Reedus) is reluctantly in charge of the Sanctuary while Maggie (Lauren Cohan) is now in charge of Hilltop following a vote where she ousted Gregory (Xander Berkeley).

With the world changing and nature beginning to takeover, supplies are dwindling and becoming more scarce. Rick led a large run into Washington to scavenge anything useful they could find at a museum. In particular they were after old carts and farming equipment they could use with their horses.

Walker resistance at the museum seemed fairly light until they came to large staircase that had a glass floor before it. Down below was packed full of Walkers so the group tried to be careful. Upon bringing a large carriage down the staircase the weight was a bit too much and the glass began to crack.

The last to cross was Ezekiel who fell through but fortunately was saved by a rope and the rest of the group. It turns out that Ezekiel and Carol are proper romantically involved now and on the way back he even proposed to her. She turned him down for now.

Part way home the group came to a bridge that had been partly destroyed forcing a diversion. The carriage got stuck in the mud and a group of walkers appeared. They considered leaving everything and coming back later but a young lad named Ken wanted to save his horse. He failed miserably and was killed by the walkers.

Back at the Hilltop, Maggie was reunited with her new baby, Hershel. She had to give Ken’s parents, Earl and Tammy, the sad news about his death. They were obviously very upset and blamed Maggie for taking him along. They decided that Maggie wasn’t welcome at the funeral.

Later, at the funeral, Gregory made a speech. He was up to his old tricks and used it to begin influencing the parents. Next he got Tammy drunk so she went to bed leaving him with Earl. He also plied Earl with alcohol and tried to convince him that Maggie should no longer be leader.

Later still, Maggie was talking Hershel for a walk in his pushchair. Gregory popped up and mentioned that someone had defaced Glenn’s grave, knowing she’d go straight there. At the grave, Maggie was attacked by Earl but she was able to fight him off long enough for Jesus (Tom Payne) and Enid (Katelyn Nacon) to come and help. Unharmed, Maggie knew that Gregory was behind the attack and went straight to his office. He pulled a knife on her and said he’d say killing her was self defence but she overpowered him.

Rick, Michonne and Daryl took some supplies to Sanctuary. Their the people celebrate Rick for his efforts in toppling Negan. However, they spotted a ‘We are still Negan’ message painted on one of the walls. Daryl told Rick he didn’t want to be leader of Sanctuary and would prefer to be at Hilltop. Later, Carol told Daryl that she would take his place to give her some space from Ezekiel.

After Sanctuary, Rick headed to see Maggie at Hilltop. He appealed for her to donate more food to Sanctuary and people to help rebuild the bridge. In return she wanted the fuel made by those at Sanctuary. She’s still upset at letting the rest of the Saviours and Negan live. She reminded Rick that he said he would follow her when the war was over. It never happened but now she’s ready.

At the end of the episode, Maggie had finally had enough of Gregory and decided to stamp her authority on Hilltop. She had him hung in front of everyone for his constant scheming.

Can’t wait for the next episode? Read our preview of The Walking Dead – 9×02 The Bridge.