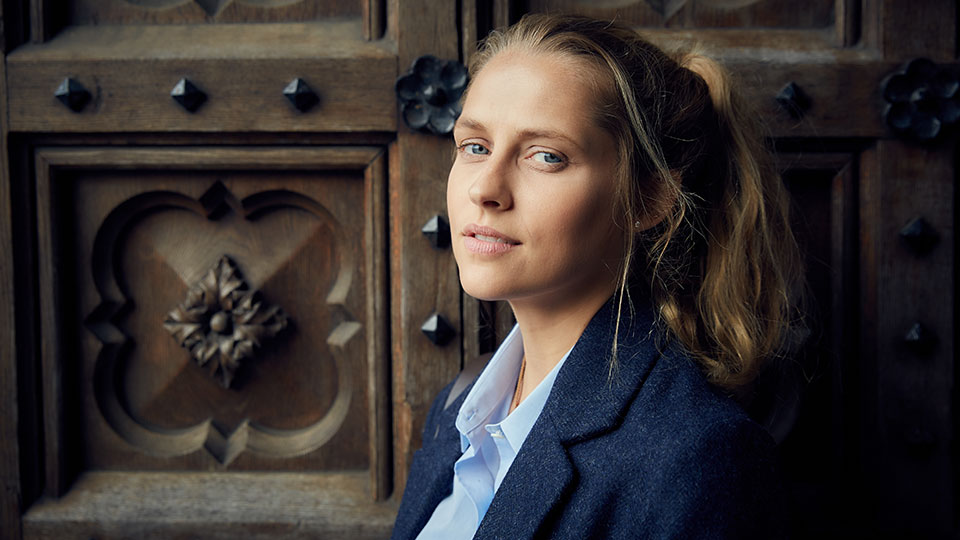 Australian actress Teresa Palmer made her name on the big screen in films such as Warm Bodies, Lights Out and Hacksaw Ridge.

For her next role, Palmer is heading to the small screen for Sky One’s supernatural series A Discovery of Witches. Starring opposite Matthew Goode, Palmer plays Diana Bishop in the adaptation of Deborah Harkness’ best-selling books.

I had a chat with Teresa ahead of the show’s premiere this week to discuss her character, find out how she got involved in the series, and to talk about working with Matthew Goode.

Hi Teresa. How are you today and where does this email Q&A find you?

I am really well thank you. This email finds me in my home town of Adelaide, South Australia. It is beautiful and sunny and we’re enjoying some family time on our bush property here

Your new show A Discovery of Witches is coming to Sky One this month. What’s it all about?

A Discovery of Witches is a historical fantasy that follows the story of Diana Bishop, an American historian studying at the University of Oxford. Diana finds a magical ashmole manuscript that has been missing for years and her life is turned upside down as she is forced to face her heritage as a witch. Her discovery of the manuscript leads her to Professor Matthew Claremont, a vampire whom she falls deeply in love with. Inter-species relationships are strictly prohibited, so Matthew and Diana find themselves in a battle against other mystical creatures such as witches, vampires and daemons.

You play the character of Diana Bishop. What do we need to know about her going into the show?

Diana has denied her natural powers for years because all she wants is to be human. Her parents were murdered for being witches and this is a great source of trauma and suffering for her. She tries so hard to deny her heritage by having a one track mind for her studies and developing her career, but discovering the ashmole forces her to face her true identity as an immensely powerful witch.

What attracted you to the role and how did you get involved with the show?

My agent sent through the script and I was I was immediately taken with the role of Diana, she is brave and strong yet complex and vulnerable. Her character is beautifully written with so many colours to play but she is also so human, so genuine, and I felt I would get along with her in the real world.

I met with Jane Tranter and the director JC in Los Angeles, we sat for an hour discussing the show and I was incredibly moved by their passion and vision for the story. I had just finished watching The Night Of which Jane brought to HBO and I absolutely loved it; I knew I would be in safe hands if I took on the role. I went on to do a chemistry read with Matthew and we got along like a house on fire. The rest is history!

The cast of A Discovery of Witches is amazing. What’s it been like working with the likes of Matthew Goode and Alex Kingston?

Working with Matthew was so much fun, we were always laughing and goofing around which really helped get through what were otherwise very long days on set. He is an incredibly talented actor and born to play the role of Matthew Claremont!

I grew up watching Alex Kingston on ER so it was very surreal to meet her in person and she played the role of my Aunt Sarah so beautifully. It was a great privilege to work with her and we found it so easy to connect, she is truly a ray of sunshine.

What preparation did you do to get into character and what was the most challenging aspect of playing Diana?

I did five weeks of rowing training before the show started and learnt the mind-body connection of rowing; if I got too in my head the boat would start to wobble so it became much like a meditation practice. One memorable day Deb Harkness took me to Cardiff University to handle some old texts and help me figure out what to look for in them, there is a very specific way to treat these texts and I learnt how to be with manuscripts from the 16th and 17th centuries, it was so special! I also read lots of books on alchemy and became obsessed with the work of John Dee.

At times it was challenging to strike the balance between Diana being resistant to her powers and learning to embrace them. I had to take a character that was otherwise human and relatable and ground her in a fantasy show, every moment had to feel true despite the radical going ons around her!

What has been your favourite thing about your experience working on this show?

The entire cast and crew of this show were wonderful, everyone was so supportive which made the transition to living in the UK much easier. I moved the whole family to Wales and Cardiff really became our second home. The Bad Wold studios are ginormous and our incredible production designer, James North, built the wildest most extraordinary sets. The magic of the show and the people involved was what made the experience so positive.

Supernatural shows are very, very popular with audiences right now. What do you think it is about the genre that resonates so strongly with people?

That’s a great question. I think it could have something to do with escapism and being swept up in fantasy, magic, power, darkness and all things forbidden! A Discovery of Witches really draws you in and steals you away, I can tell it will be so enjoyable for audiences to become immersed and enchanted by that sensation.

Back to the UK we go for Season 2! I am also excited for the release of a feature film I recently shot in Australia, ‘Ride Like A Girl’, directed by Rachel Griffiths. It’s a biographical film of Michelle Payne, the first female jockey to win the Melbourne Cup which is the largest horse race in Australia. It’s an incredibly uplifting story and I can’t wait to share it with the world.

Why should people tune in to watch A Discovery of Witches?

A Discovery of Witches is magical in the true sense of the world. It is also set in a contemporary time period which I feel sets it apart from other fantasy films and shows. It is complex, sophisticated, very dark and fiercely romantic – what’s not to love??!

A Discovery of Witches begins at 9pm on Friday 14th September 2018 on Sky One. Watch the trailer for the show below:

In this article:A Discovery of Witches, Sky One, Teresa Palmer