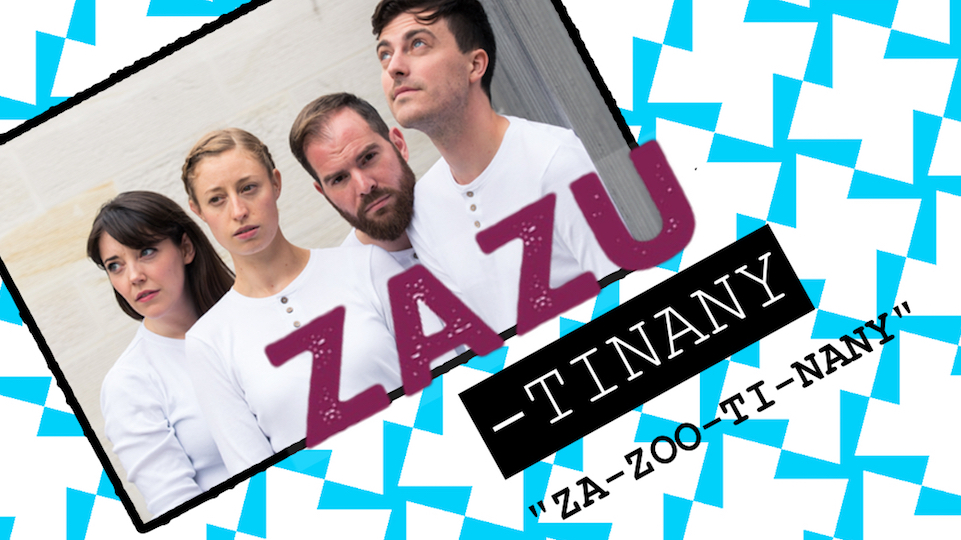 Award-winning comedy troupe zazU are a funny force to be reckoned with in their late night comedy game show zazUtinany this Edinburgh. Each night, contestants are forced (freely volunteer) to partake in quizzes, arts and crafts, competitive humming and whatever other daft activity can be turned into a competition. Expect, well, anything and everything from this imaginative group of high-energy sketch peddlers.

zazU comprises of writer/performers Harrie Hayes, Tom Machell, Nick Read and Maddie Rice alongside writer/director Katharine Armitage. They met whilst writing and performing the satirical sketch show NewsRevue and the two girls/two guys dynamic makes for a balanced chemistry which also lends itself well to taking two sides as one male and one female pair up. We we enter the Underbelly’s cosy Buttercup, each audience member’s given the choice between two badges. One labelled ‘Cucumber’, the other, ‘Courgette’. It soon becomes clear that the zazU crew are about to pit fans of Pimms against devotees of Spiralizers as they pose the ultimate (and very silly) question… is a costume Harrie created meant to be a cucumber or a courgette? It sounds wacky, and it is, but it’s the kind of carefree comedy anyone can enjoy feeling a part of. Is it a clever metaphor for ‘Leave’ vs ‘Remain’? Nah, you can leave your politics at the door in zazU’s zany universe.

As contestants volunteer from each side there’s all manner of childish challenges where they have to say what they sniff, guess what they’ve heard and burst balloons in the fastest time. It’s a show where points mean lollipops! This isn’t a kids’ show, though, there’s adult content and some swears as the ‘biased bastard’ Nick refuses to let the teams score fairly. Bizarre skits between the various rounds were well received, keeping up the pace and maintaining the zazU universe. All four players give their performances everything they’ve got but Harrie Hayes in particular is a gifted physical comedian leaving the audience – and her co-stars – in fits of laughter with ludicrous dance moves and pliable facial expressions.

The shenanigans included a special guest act from the festival with a 7-minute spot reserved to plug their own show. Ali Brice was in promoting his absurdist show ‘Ali Brice’s Lemonade Stand’ the night I was in. In truth, I don’t think filling with someone entirely unrelated to zazU’s shtick’s a good idea. It risks sucking energy out of the room, which it did on this occasion, but zazU soon had us all back in the grip of the competition. Despite it being impossible to call whether Cucumber or Courgette was the right answer, I felt pangs of disappointment when my team lost. If you want a frivolous late night show to release some tension after a long day at the festival, this is ideal. You won’t learn anything but you’ll feel involved, and have a giggle, whether you get on stage or not.