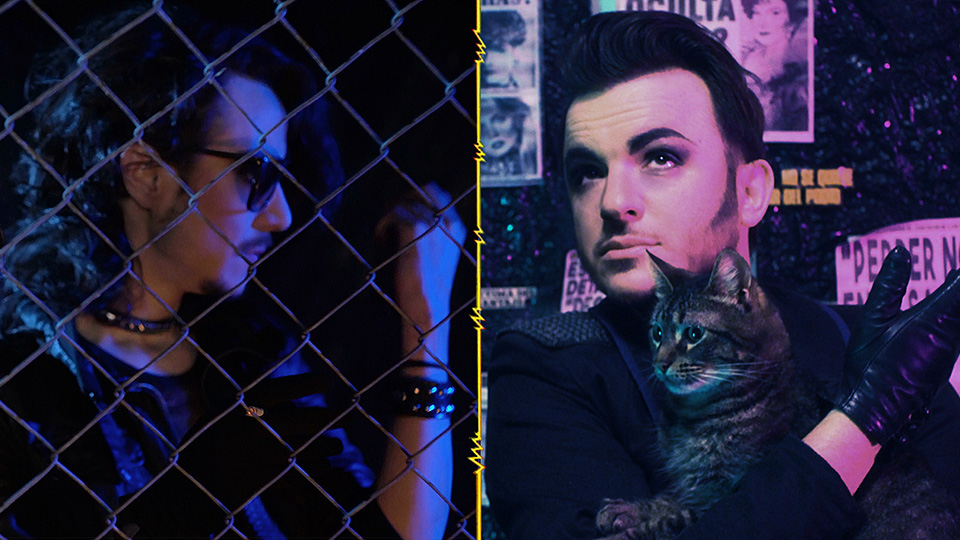 One film you should definitely add to your watch list for this year’s Arrow Video FrightFest 2018 is Crystal Eyes by writer/director team Ezequiel Endelman and Leandro Montejano.

A nod back to the classic 80s slasher flick, the duo could very well have an iconic killer to add to the horror genre. Crystal Eyes will be receiving its European Premiere at this year’s festival and trust me when I say it’s a real hoot. I highlighted the film as one of the 10 hidden gems this year.

I caught up with Ezequiel and Leandro ahead of their arrival for Arrow Video FrightFest to chat about the 80s influences on the film, talk about the creepy killer mannequin and discuss working with screen legend Silvia Montanari.

Hello Ezequiel and Leandro. How are you today and where are you speaking to me from?

Hi Everyone! We are great, thanks! Today we have a screening of our movie here in Buenos Aires, and we’re leaving for London in less than a week, so imagine how serene we are right now.

Your film Crystal Eyes is screening at Arrow Video FrightFest in London this month. Tell us what the film is all about.

Yes! And we can’t be more thrilled about it!

Crystal Eyes (Mirada de Cristal) is a neo Giallo, set in a 1985 Buenos Aires, in the Fashion World. It’s the first anniversary of Alexis Carpenter’s death, the supermodel who died tragically while closing a runway show. Lucia L’uccello, the Editor-in-Chief of the most famous fashion magazine in Buenos Aires, decides to pay an homage to her on the cover of her magazine.

The night of the photoshoot, the dresses worn by Alexis disappear and the models and the editorial staff began to be haunted by a sinister female figure wearingg a black raincoat.

Crystal Eyes is an homage to everything we love. From masked killers to Pop culture, and from telefilms to Italian cinema.

How did you come up with the concept for Crystal Eyes?

Crystal Eyes was supposed to be the third episode of our web series, No Podrás Dormir Esta Noche (You Won’t Sleep Tonight), which pays tribute to a different horror sub-genre with each chapter.

We knew we wanted to do a Giallo, and have recently watched Sotto Il Vestito Niente and Blood and Black Lace, and loved Suspiria since forever, and we wanted to portray a feminine world, so we combined everything and made our movie. The episode finally evolved into a feature film, and here we are.

One of the things I really loved about Crystal Eyes is that it feels like an homage to the classic slasher films of the 80s. What influences did you draw on when you were writing the screenplay?

“Influences, those little slices of life – how I love them.” We can’t imagine life without the Sacred Rules of Pop Life.

We were listening and watching the music video of Voyeur by Kim Carnes all the time, that was actually the real song played at high volume while the actresses were walking the runway at the Fashion Show opening scene.

Prom Night 2: Hello Mary Lou was our guiding light to do that scene. Also Curtains, Dressed to Kill (we ripped off the black and shiny rain coat of Bobbi without trembling), the classic point of view through the killer eyes from Halloween and also the Italian masterworks (We all know which they are).

Nods and references are the way we live our real life, not just our movies.

The killer looks so creepy. Where did the inspiration for the character come from?

With the killer, we wanted to do something iconic. There are lots of mannequins in Giallos, it’s common imagery in most of them. We thought turning one into the killer was a good idea. Besides, masked female killers are not that common so we liked that, too.

We talked to our very talented friend, Issis Trash, who is our personal MacGyver, and decided how she would look and she made everything from scratch (Her only condition was to play the Mannequin, and we were delighted to let her!).

Silvia Montanari appears in the film as Lucia L’ucello and she’s brilliant. How did you get her involved with the film?

Silvia Montanari is everything. She’s our personal God. We always wanted to work with her as she’s an incredible actress. We found her telephone number in an old phone guide from 1985 and called her, and she was delighted to make a horror movie again (as her first movies were horror ones, directed by the genius hand of Narcizo Ibañez Menta).

Working with Silvia was one of the best experiences we ever had. She was pleased as we offered her a character who was fierce and mean, almost a villainess and not the typical parts of being the aunt of the main character.

We told her that we always thought of her as our local Joan Collins in Dynasty. She loved that and told us: “You are not the first ones to tell me that. It must be true, then”
Love you, Monta! (The phone guide thing is not 100% true)

Thank you! We carefully thought of every shot in advance to give the deaths that vintage look and make them effective. We wanted the deaths to be different from each other, so each death was a new challenge and we really enjoyed that. For Alexis Carpenter we thought of 8 different ways to kill her until we came up with the definitive one. She needed to go out in a blaze of glory!

What would you say was your biggest challenge when making Crystal Eyes?

Making the movie with almost no money and no production company behind us. We were a group of friends trying to make a movie that made us proud. Because of the small budget, it took us two years to complete the filming process. That was the hardest part for sure, along with dealing with 10 things at once. Directing and making the movie catering isn’t a thing we recommend!

Also maintaining all the same cast through 2 entire years, with the same haircuts and praying no one thinks about leaving the country until the scenes were filmed. It was a mini living nightmare but everything went alright.

What’s the one horror movie you wish you’d made and why?

Ezequiel: Carrie. I love that movie. Sissy is everything. Piper Laurie is amazing. We all felt like an outsider at one point or another, so that made me love Carrie even more.
And having to direct P.J. Soles isn’t bad either!

Leandro: Oh, no, the hardest question of them all! I guess I’d love to make Nightmare on Elm Street 3. I imagine me making all those scenes with Sister Mary Helena and her maniac son, my beloved Nancy Thompson and especially Taryn White, my role model of how a Dream Girl should look and act. I love you, Taryn.

Also sneaking out with Joey, Phillip and Jennifer to having a smoke, hiding ourselves from Max and Dr. Simms. Kincaid can wait in the quiet room.

It’s very difficult to keep the line between real from imaginary, my apologies.

What else are you working on at the moment?

We are currently writing a couple of short stories we’d like to intertwine to make a feature film, and we have a Crystal Eyes sequel planned in a couple of years. Also we are working on some custom Action Figures from the Movies. We are finishing our first Mannequin with accessories in her own private Box Set. Doing a film is really hard work, but we don’t want to stop doing what we do. Besides, doing (and watching, always) Horror Films is a many-splendored thing.

Crystal Eyes receives its European Premiere at Arrow Video FrightFest on Friday 24th July at 9.30pm and Monday 27th August at 1.35pm in the Cineworld Discovery 2 Screen. Watch the trailer for Crystal Eyes below:

CRYSTAL EYES from FrightFest on Vimeo.