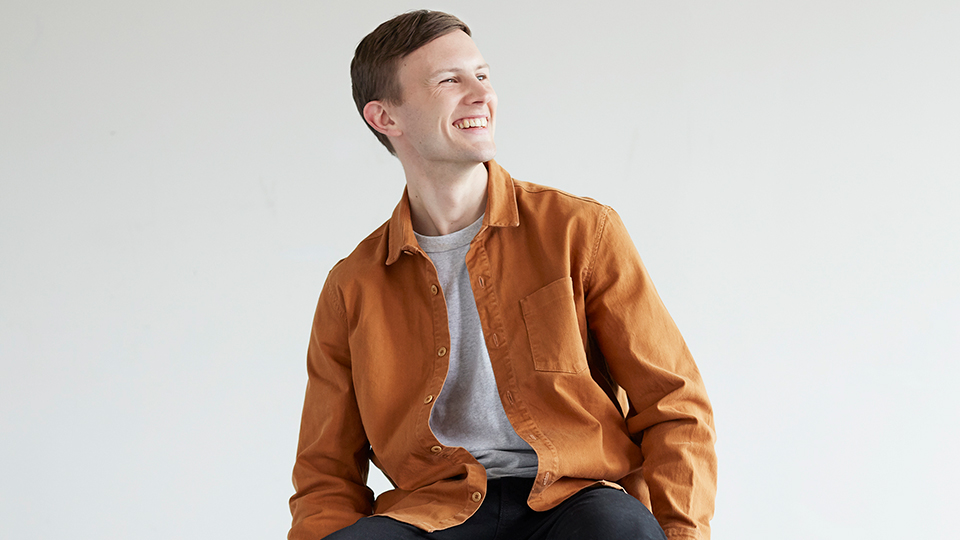 Rising British actor Hugh Coles may have only recently graduated from drama school LAMDA but he’s hitting the ground running with a starring role in new film The Festival.

The hilarious comedy from the team behind The Inbetweeners and Fresh Meat, arrives in UK cinemas next week and also stars Joe Thomas (The Inbetweeners). Coles plays the character of Rex and he’s sure to make a huge impression.

I caught up with Hugh recently to find out more about The Festival, talk about what it was like to work with modern comedy legends Keith Akushie and Iain Morris, and discuss his upcoming BBC comedy series Defending the Guilty.

The Festival looks absolutely hilarious. What can you tell me about the premise of the film?

Nick, who’s played by Joe Thomas, and his group of mates all go to a festival, and Nick’s just broken up with his girlfriend played by Hannah Tointon. He desperately doesn’t want to go. Shane who is played by Hammed Animashaun, and is absolutely brilliant, convinces him to go because he loves DJing and festivals in general. They go and they run into my character Rex, his ex-girlfriend and a man called The Pirate, who’s only got one leg and Rex met on a ski season. Everything goes wrong for Joe’s character (laughs).

We see a glimpse of your character Rex in the trailer. Tell us a little bit more about him and what kind of character he is…

Rex is one of those brilliant people who is arrogant beyond belief but with no backing whatsoever (laughs). He’s not that clever. He’s not that funny…. very, very much not that funny… but in his own head he thinks that he is. It was just really fun because I’ve met those people and I hate those people. It was really fun to get to play someone like that who’s all bravado with nothing to back it up.

How did you get involved in The Festival?

I finished LAMDA drama school last July and I taped for the role. There was a long gap and I agreed to go to the Edinburgh Festival playing piano for a musical comedy duo. I didn’t hear anything and then I was brought in for another audition to read with Joe Thomas, which was a bit weird when you’ve watched The Inbetweeners growing up and it’s one of your favourite programs. I had no idea that he was going to be in the room. I walked in and saw Iain Morris the director, Claire Jones the producer and Joe Thomas. I thought, ‘fantastic. Try not to freak out’. I did that and then there was a long period of nothing again so I actually went to the Edinburgh Festival. About a week in I got the call to say I got the part and they needed to get me down to Bristol for the next morning. I had the sticky process of removing myself from a show which had to be done that night and then I was in Bristol the next morning. I flew over night. It was crazy.

The film is from the team behind Fresh Meat and The Inbetweeners, who are considered modern comedy legends. Was it daunting to step into a film with them?

The script is brilliant and it was written by Keith Akushie and Joe Parham, who wrote Siblings as well. It is very much in The Inbetweeners universe and that style of comedy but it’s unique as well. When I read it for the first time and I was just laughing at the script. It was brilliant.

The film has a really great cast led of course by Joe Thomas. What was it like working in such a talented ensemble?

They were brilliant and they were just really, really lovely. The whole the whole team behind it… I was quite lucky because I got to meet some really nice people who are also insanely talented. Obviously you’ve got Iain and Joe who had done The Inbetweeners and their chemistry was apparent off the top. Then you meet people like Hannah (Tointon) and Lizzy Connolly who plays Lucy, who Rex is trying to sleep with for the entirety of the film (laughs)… Hammed… it was just a real joy to be on set with them because I’ve just come straight out of drama school and it’s all very scary. They’ve worked for a while and they were just so lovely and so accommodating. We still chat now. It was really lovely for that to be my first job. It was a really nice atmosphere to walk into.

Have you actually been to many festivals yourself?

I’ve been to two festivals in my life. One was Belladrum in Inverness in Scotland when I was 14 and that was very much folk music, hay bales and everyone was having a lovely time. The music quietened down by 6pm and everyone sauntered offer to their tents and it doesn’t rain. It was just very nice. I also went to Global Gathering, a trance festival, when I was 17 and that was very much the other end of festivals. it was pretty much where the The Festival film is based. All the horrible things that happened in The Festival, very much happened to me at Global Gathering.

What’s been your worst experience at a festival?

Oh dear! I woke up on the final morning of Global Gathering, and I was just a young naive idiot, and the carnage on the final night…. It was pretty mad getting up to the final night then I woke up that final night and everything, I mean everything, was trashed. People were burning the place down… not just pick up and leave… they were just burning it down and kicking all the tents over. I needed the loo and there were no showers anywhere. I thought, ‘I need the loo, then I’m going home’. I got into the urinals and two long troughs of urinals filled to the brim and overflowing with piss. I was like, ‘I need to leave this place immediately, this is hell!’ (laughs)

Yeah exactly. Why would anyone do it? (laughs).

There’s something about festivals isn’t there? When people go there they seem to lose all kind of sense of common courtesy and manners. It’s bizarre…

Exactly. It’s like the last days of Rome, it was mad. We went to Bestival to do some filming and it was fun to watch the effects of alcohol and other stuff substances on people around 6pm to 9pm because around that time, people have had a lot of whatever they’re going to have and then it turns into bedlam. There was a guy I remember who was just walking into a fence and screaming at the sky. You have to think, ‘where is he right now?’.

Probably not at that festival….

You’re working on the new BBC series Defending the Guilty. What can you tell me about that?

Will Sharpe’s the lead and it’s also got Prasanna Puwanarajah, Katherine Parkinson and Emily Berrington. It’s directed by Jim Field Smith and we did the pilot in January. It basically follows the story of four young barristers trying to make their way in the legal profession and the backstabbing and skullduggery that goes along with desperately trying to make your way into being a fully-fledged barrister.

It sounds really interesting. We get so many American legal dramas that make it look glamorous and it sounds like this is going to show something quite different…

Yeah. The American legal system is very flashy. It’s all suits and cool guys whereas this is very much wigs and not knowing what you’re doing, turning up late to things and going into court hearings with people who are terrifying. It’s going to be really great if the pilot’s anything to go by. It was just a process that was really lovely and absolutely everybody on set was just golden.

Have you got any other projects on the go that you can talk about at the moment?

I’m just doing a lot writing at the moment. I’m auditioning for things here and there but I’m writing a solo sketch comedy show, which may or may not go to Edinburgh. We’re looking at going to the Edinburgh Festival maybe next year. I’ve done a lot sketch comedy in the past and luckily my friends, who I’ve done sketch comedy with before are willing to sit down and listen to my terrible ideas and go, ‘no that’s awful you can’t do that’ or ‘that’s brilliant do that’. I’m playing a lot of music and just auditioning.

The Festival is released in UK cinemas on 14th August 2018. Watch the trailer for the film below:

Advertisement. Scroll to continue reading.
In this article:Hugh Coles, The Festival