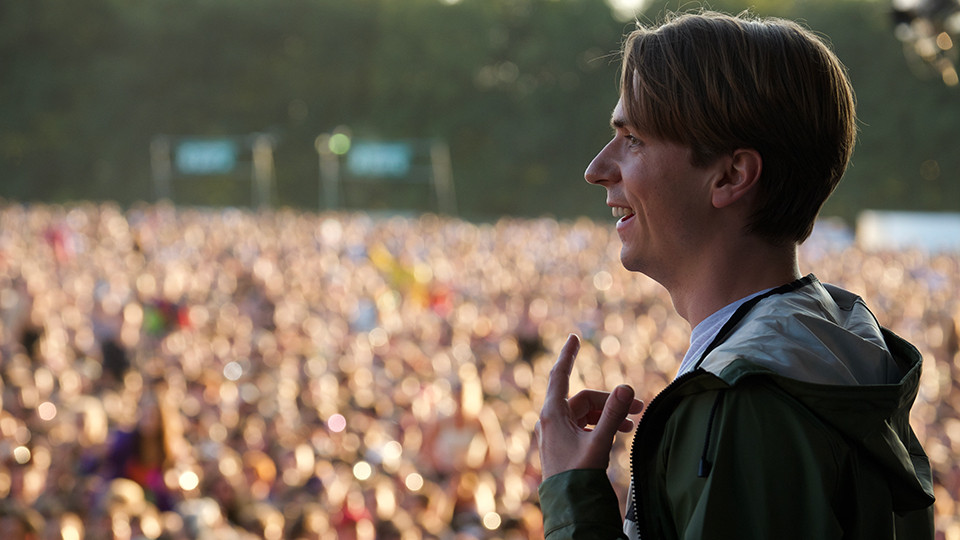 After being dumped by his girlfriend Caitlin (Hannah Tointon) during graduation, Nick (Joe Thomas) is convinced by his best friend Shane (Hammed Animashaun) to go to a festival with him to get over it. Initially reluctant, Nick is convinced and he sees it as an opportunity to win Caitlin back. When the two arrive, with quirky Amy (Claudia O’Doherty) who they met on the train journey, Nick realises that winning his ex back isn’t going to be as easy as he thought. As Shane tries to keep him focused on enjoying the festival, Nick has other ideas and the weekend quickly descends into a disaster.

The Festival is by the people behind The Inbetweeners and it reunites writer/producer/director Iain Morris with one of the stars from that show, Joe Thomas. Within the first 10 minutes you know exactly what to expect from the film and if you’re a fan of The Inbetweeners, you’ll love it. Thomas plays pretty much the same character as he did in that show and the humour is concerned with drugs, bodily functions and very public embarrassments. The film takes a little while to get going but once Nick and Shane arrive as the festival, the pace picks up as do the laughs.

Using the classic fish-out-of-water trope, The Festival puts Nick in the middle of a situation that he would never have chosen to be in. His ex-girlfriend is flirting with a man known as The Pirate (Kurt Yaeger), he’s inexperienced with festivals and drugs, and he’s completely ill-equipped to deal with the weekend. Fair play to Thomas, he really commits to the character and he’s willing to make even more of a show out of himself than he did on The Inbetweeners. One of the most cringeworthy moments comes when he agrees to do a striptease for a hen party in order to get some information he needs from them.

There are plenty of laughs to be had too. The hit rate is consistent and a lot of the comedy comes from the nervous and chatty Amy who considers herself a friendless expert on festivals. Nick soon grows tired of her personality but Shane quickly bonds with her causing friction between the two friends. Hugh Coles brings plenty of laughs too as the uptight Rex, one of Caitlin’s friends, who spends the film not too subtly trying to get into the pants of another one of the group, Lucy (Lizzy Connolly).

There’s also a sub-plot involving a woman dressed as a smurf whom Nick meets and has an unexpectedly wild night with. It’s a nice distraction from the main plot and it involves a moment that made wince at what was happening on the screen. I actually had to turn away but it was very funny.

The Festival is a light and breezy film that’s entertaining and very funny. If we can’t have a third Inbetweeners film, then this should easily fill that void. There’s nothing groundbreaking or even particularly original here but it’s the kind of film that you can turn your brain off for and just enjoy the ride. The cast does a great job, the film has a nice pace and there are some genuine belly laughs over the course of the 98 minutes. While it may not stand up as strongly as The Inbetweeners, it’s decent enough to be worthy of your time.