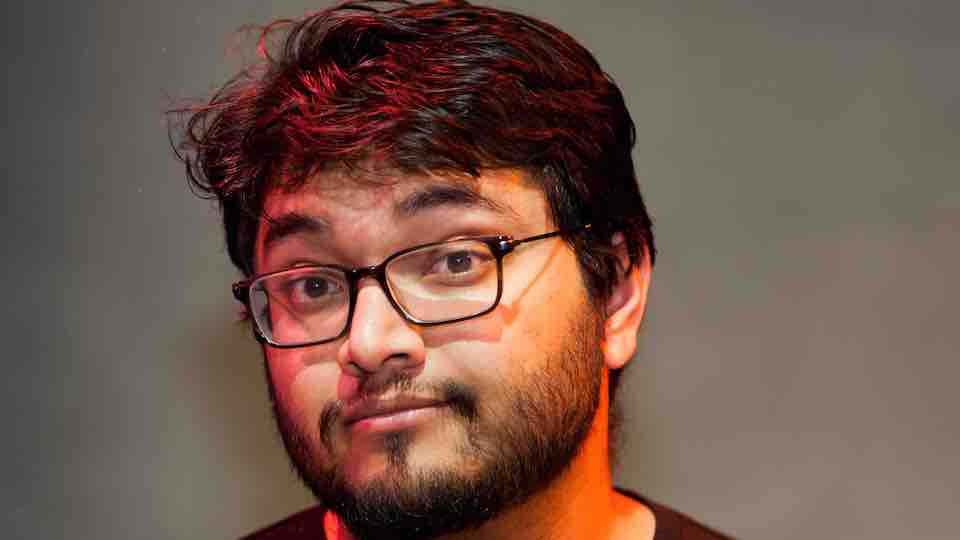 Sid Singh returns to the Edinburgh Fringe to tear a strip off Silicon Valley’s tech culture. Sid grew up in Silicon Valley and has seen it evolve into a ‘playground for the rich’, watching the area’s liberal values fall away.

In his show, American Bot, Sid Singh will look at how the Black Lives Matter movement and the #MeToo movement were supported financially by Valley ‘philanthropists’, but how their actions actually failed to support either in a tangible way.

I recently chatted with Sid, as he took a break between law studies, to discuss Edinburgh, ‘bad guy’ billionaires, and his experience with audiences on both sides of The Atlantic.

How many Fringes have you done, Sid, and what can audiences expect from ‘American Bot’?

It’s my fifth time in Edinburgh but my first full one-man show. I’ve been stuck living in Silicon Valley for the last three years. So in the style of a New York stand up I’ll be exploring what it’s like to be back. I lived in Silicon Valley growing up, then I left at 18 to go to college. I’m back ten years later so it’s talking about how much it’s changed.

You’ve noticed a lot of changes in the ten years?

The thing I want to talk about in my show is that it feels like it changes but really the seeds were always there. It’s a hard argument to make right now with Trump as president. It’s the idea that Trump is like a dead cat bounce as it were. These billionaires and the way they spend their money and treat people, they’re the ‘bad guys’, they’re going to start coming after the rest of the world as well. I’m a comedian and I’m also in law school. You see the way that gentrification is a domino effect from the way these billionaires are treating a city like their own personal playground.

So you’re delivering a serious warning for the future?

I have a silly style. The show won’t be short on jokes. These billionaires are such weirdos it’s not hard to make fun of them. When I was writing the show initially I decided not to make fun of Trump as it’s too easy. Why would you pay for that? Why give a comedian money to do that, what a bad return on an investment. There’s nothing left to say. Now, I do have more to say, having studied Refugee Law, but I still think that Trump is a problem for now that won’t exist in the future but these guys are going to keep creating and exacerbating the problems of now. That’s the difference.

In previous stand up shows you spoke of how your dad begged you to go to law school as opposed to doing comedy, have you found a way to do both?

Yes, I found a way to do both, I’ve spent three years in law school. I went to New York as I had a friend who offered me his couch while I did comedy. The two most important things in my life are comedy and desperately hoping my family love me. My parents begged me to go to law school, so I did. I got to go to a really good school, UC Hastings, which has a lot of great professors that inspired me to do human rights law. Doing that alongside comedy is a goal of mine.

Have you noticed differences between US and UK audiences?

There’s small differences in references, I did a bit about the Tiki torch carrying white supremacists in Charlottesville and how weird it was that you could both be a Nazi and love Hawaii but in London that wasn’t a connection that people made as quickly.

Is there a difference between UK and US heckles?

Thing is, it’s hard to heckle me. I come off as if I know what I’m doing and people like me. If people heckle me it usually happens that they realise they’re on their own, the rest of the audience turns on them. Don’t get me wrong, there have been times where that has not been the case. When I did Birmingham’s Glee club for the first time, they were not fans. They decided to hate me from the start because I was ‘the American comic’.

There’s no winning them back then if they’ve decided to hate you?

It’s an uphill battle but it’s not unwinnable, it’s a matter of finding the right keys to get in. Once you can figure out how to relate to someone they’re going to hear you out even if they didn’t want to initially. The thing people don’t realise about comedy is that I consider myself to be liberal but I would say the bigger divide is between liberal and conservative. In the sense that conservative audiences that come to comedy shows are way more willing to poke fun at themselves. So one of my challenges in San Francisco is to get liberal audiences to make fun of themselves as well.

Do you have a theory as to why that might be?

To be fair to liberals it’s because there’s a lot more hurt associated with the things that you could make fun of them for. For conservatives it’s easier to laugh at themselves when they assume they are the dominant culture. There’s a lot of hypocrisy in somewhere like San Francisco. Sometimes liberals get a little tight on me if I point out that everyone in the room walked past at least four homeless people to come to a cheap comedy show. If you’re ever wondering if you’re the good guys, you’re not.

The Edinburgh Fringe has been described as a ‘middle class’ festival for those who can afford to come, would you agree?

There’s certainly an element of that. I’ve been very fortunate because my venues have been all over the place, I’ve got a lot of locals in. I like having college students and working class people in the audience as well. My jokes land irrespective of the audiences’ background. I’m doing a free show, and I’ve been doing this ten years. I’ve got good at it, so come along, don’t worry.

Catch Sid’s ‘American Bot’ at Just the Tonic at The Mash House (Cask House) throughout August. Dates: 2 – 26 August (not 13) Time: 18:25 Duration: 1 Hour Entry: £5 to reserve in advance, or Pay What You Want Web: https://www.sidsingh.org Twitter: @MrSidSingh

In this article:Edinburgh Fringe Festival, Sid Singh, The Mash House