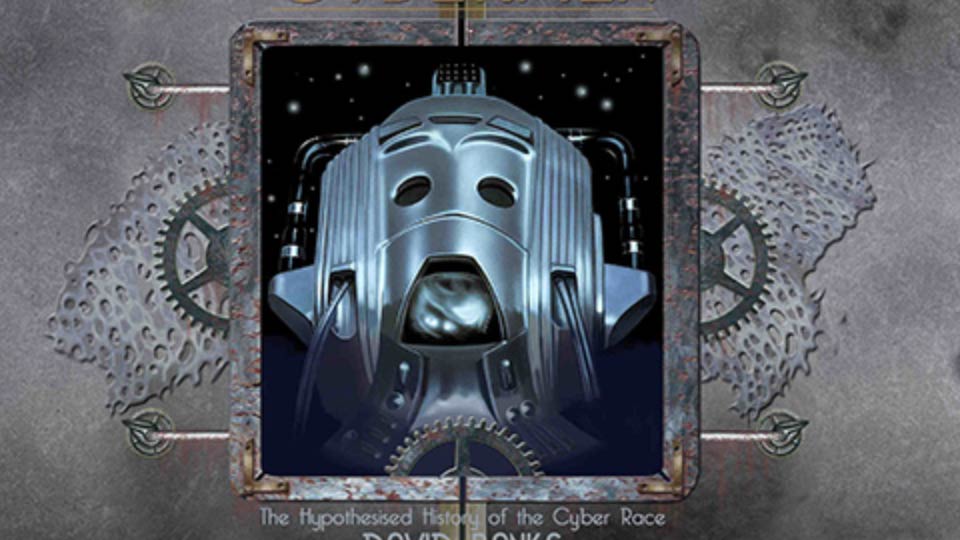 Who are the Cybermen? Where do they come from? What is the aim of their race? Why does their appearance change between their encounters with the Doctor? A fascinatingly rich tapestry of Cyber mythology is presented in this audio guide to the enduringly popular monsters from Doctor Who. The ArcHive Tapes is written and performed by David Banks, who in equal measure terrifies and delights generations of Who fans through his role as the Cyber-Leader during the 1980s, which he is reprising on audio (in Big Finish’s The Hour of the Cybermen). Here though, he isn’t the CyberLeader, but the narrator of an intriguing Cyber history…

The ArcHive Tapes – the Hypothesised History of the Cyber Race began life in the collaborative venture between Banks and illustrator Andrew Skilleter that led to the celebrated 1988 Doctor Who – Cybermen book, in which Banks offered a history of the Cybermen as they appeared in the ten televised encounters with the Doctor. In one intriguing section, Banks proposed a detailed mythology of their fictional life, something which had never before been attempted. The result is a narrative of breathtaking imagination, which has quickly become embedded in Doctor Who folklore.

This release of The ArcHive Tapes is an updated version, bringing all chapters of the Cyber mythology together on four discs, including exclusive video interviews with the creative talent of David Banks and Andrew Skilleter (who provides the evocative cover art and booklet illustration). The recorded narration has superb audio quality and includes mood-setting soundscapes and effects, and also incorporates some of the memorable incidental music from original stories such as The Tomb of the Cybermen.

From the opening sentences, it’s impossible not to be drawn into the richly-detailed world that Banks has created. The conceit is that all of the documents relating to the Cyber race are collated by historians into an ArcHive. Dedicated scholars pore over the audio-visual files, reconstructing dates and details from fragments, proposing a working hypothesis of a complete history, filling gaps in knowledge with educated guesses. We hear how chief ArcHivist Hegelia has interpreted the surviving evidence to present a compelling working theory, as well as from her fellow ArcHivists who specialise in particular eras of Cyber history. Perhaps it’s the latent classicist in this reviewer that was so thrilled by this idea – the ArcHive is like an intergalactic, multimedia version of the Library of Alexandria – and Hegelia may well be a future Hypatia. To stretch the allusion even further, the audio history as it unfolds has a delightfully Herodotean quality – with many digressions and footnotes that weave into the main narrative.

Why did the Cybermen evolve their appearance? What happened to them after each defeat? Why are there different factions, and are all of them still extant? The ArcHive Tapes recounts each of the Doctors’ encounters with the Cybermen (the Third Doctor finally met them in The Five Doctors, of course…), giving an overview of each adventure and postulating questions and answers to fill the gaps in between. David Banks has certainly done his research here, and as the mythology unfolds, it invites the listener, who may have been watching Doctor Who for decades and has seen the Cybermen stories dozens of times each, to see them in a whole new light and question the assumptions they have made. Discovering new things about something you love is rather thrilling. So, put aside ideas about the changes in the Cybermen’s appearance being down to new costume designers, and inconsistencies between stories to changes in script writers or editors… and instead embark on a journey of imagination.

David Banks has one of the most distinctive voices in the history of Doctor Who, and he uses it to full effect in The ArcHive Tapes. No stranger to voice work, he has the quality and presence to captivate the listener and hold them spellbound as the story unfolds. It is well-written too, with rich but precise prose. In parts it has the flavour of a science documentary, recalling Sagan or Bronowski, such as the opening paean to the origins of the universe – in other parts it has more the feel of an audio book when the television stories are recounted – but, combined with often unsettling sounds and music, the overall impact is mesmerising. Banks also isn’t afraid to be playful with the history, for example throwing reverence aside to suggest the multiple Cyber ships in Silver Nemesis may have been an optical illusion! The chronology is also presented from the Cybermen’s timeframe, and not a simple romp through the stories in broadcast order, which keeps listeners on their toes.

This imagined history of the Cybermen will delight long-standing fans and rewards close and multiple listens. It covers Doctor Who from the Cold War era, when brutally forced conformity to a single ideology that stripped away individuality and family was viewed in a different light, and with more of a sense of horror. Fans of the remake, who have equal capacity to enjoy delving into the rich, ever-absorbing and expanding culture of Doctor Who may also find The ArcHive Tapes a treasure trove of ideas as well as a rewarding audio experience. Check out the trailer above!

In this article:Cybermen, David Banks, Doctor Who, The ArcHive Tapes