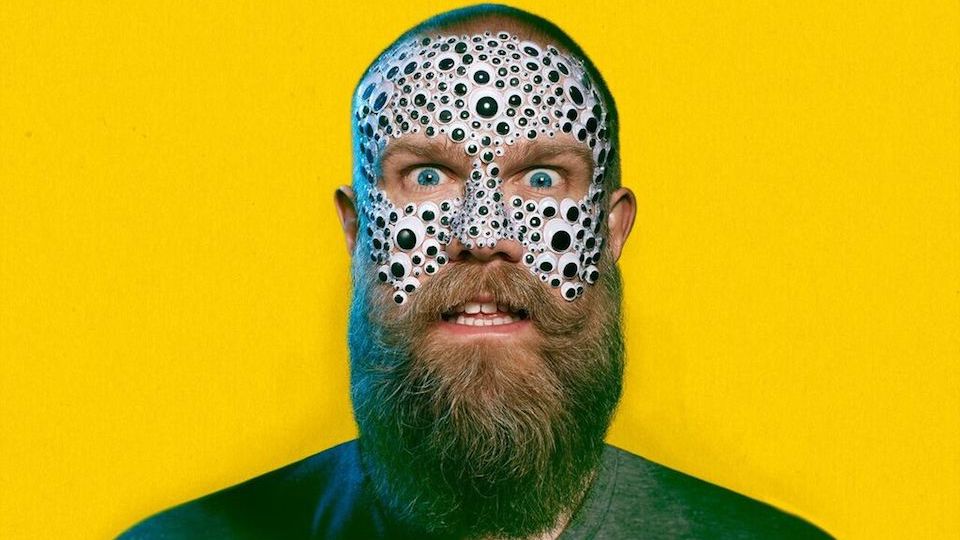 Olaf Falafel is back with another hour of surreal stupidity, inventive jokes, audience participation and the very loosest of themes. Ouija boards and workplace morale-boosting dolphins feature heavily, and Olaf personally guarantees your money back if you actually learn something of any use.

There’s no i in idiot is the follow up to The Marmosets of My Mind and Falafel’s award nominated debut hour, Olaf Falafel and the Cheese of Truth.

This third solo show explores the stranger recesses of Olaf’s head via a blend of stand up, audience interaction, projected video stuff and domestic cleaning products.

Tell us a little bit about your new show, ‘There’s no i in idiot’.

It’s going to be more of the same! Me telling more stupid jokes, a bit of audience interaction, combating racism and there’s a very strong dolphin theme. I don’t want to give too much away but I was saved by dolphins as a child. This recounts the story of how that happened.

So can we expect a plot this year?

In the last two shows I’ve roped in the help of another comedian Mark Silcox, he’s played a shopkeeper two years in a row – he sold me a ‘toilet duck-xophone’ and he sold me the Cheese of Truth. This year he’s selling me commemorative plates which contain the ghost of Robert Smith from The Cure. The audience will help me fuse together Mexican and Greek culture by smashing plates and doing a Mexican wave. I couldn’t get the insurance though so it’s got to be paper plates. I’ve drawn on the plates all different 80s bands like A Flock of Seagulls, Kajagoogoo and The Cure.

Ah yes, your other job is as an illustrator, isn’t it?

Yes I’ve written the third one of the Fart Trilogy which will be out this August, too. It’s actually ‘Parp’ in the UK, for some reason they think fart is too much for our ears. There was Old MacDonald Heard A Fart, followed by Father Christmas Heard A Fart and next it’s Old MacDonald Heard A Fart From The Past. He’s converted his tractor into a time machine and he goes back to the dinosaurs, sees Cleopatra, Vikings and Henry VIII. It’s educational as well as there being lots of different fart noises. I’ve got two kids myself so I get to test it all on them.

Were they the inspiration, did you write the stories to amuse them?

I play a lot of comedy clubs for kids, actually. I’m always trying to come up with weird stuff. A lot of the stuff I do translates into my Edinburgh show. But yes I was walking the kids to school and we were singing stuff and Old McDonald Heard A Fart came out and we started thinking about what sort of fart noises each animal would make. All the dinner ladies at the school banned all the kids from singing it and now it’s a book!

Toilet humour appeals to all ages. Does it ever surprise you how much kid and adult comedy overlaps?

Not at all. My kids come up to Edinburgh every year and we go to see the kids shows. Comedy Club For Kids have three different acts on every day. My 8-year-old daughter came up on stage as my ventriloquist dummy, that was interesting! She’s got the bug of telling jokes and gives me little tips on what she finds funny. A lot of the time, if I have to explain the joke to my kids, I think it’s too complicated for audiences to get. I had a red-and-white striped shirt on the other day and my 6-year-old daughter said, ‘Dad, you look like a circus strongman who couldn’t be bothered doing the weights.’ I put that in my gig that night and it went down brilliantly.

So they’re your writers as well! Do you think people sometimes underestimate kids? Our sense of humour develops at a young age. Do you think it’s important to shape it early on and take them to comedy?

Maybe not so much comedy clubs but it’s important not to shackle them. They don’t need to grow up, they don’t have to get a 9-5 job if they can think of something creative instead. I worked at an ad agency for quite a while then turned freelancer illustrator. There’s nothing wrong with working 9am – 5pm but it’s not your only option.

Do you like that Edinburgh presents a challenge to see where it takes your imagination?

Yes, I do, now that I’ve done three shows, next year I might do a kids show. I like performing to kids. You can put stuff in there that’s aimed at the adults but the kids don’t get, and some bits for either. It’s a good challenge. I like making comedy that doesn’t make you learn anything, just laugh.