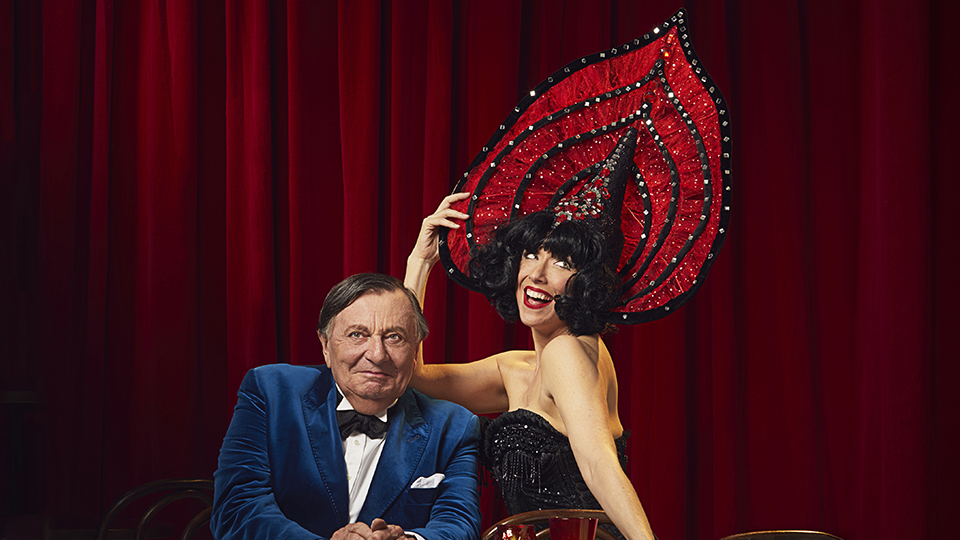 It’s not often you can legitimately use the phrase ‘living legend’ but Barry Humphries absolutely deserves the accolade. The much-loved Australian comic once entertained millions as popular alter ego Dame Edna Everage. Throughout his six-decade spanning career, Humphries, now 84, has produced a body of work across film, television, literature, musical theatre and he’s also an accomplished landscape painter. Is there anything he can’t turn his hand to? Apparently not!

Barry Humphries’ Weimar Cabaret: An Evening of Degenerate Musik is a celebration of his lifelong fascination with the music of the Weimar Republic. For those unfamiliar with this period of history, it is the German state that existed in the inter-war period between the end of World War I in 1918 and Hitler’s rise to power in 1933. If this doesn’t sound like the start of an evening filled with raucous laughter, well, you’re wrong!

Barry may have put Dame Edna to bed several years ago but he’s not lost his sharp wit, in fact, he’s even more likeable as himself than as dear old Edna. Presenting a collection of music that very nearly got destroyed by the Nazi ban of ‘Degenerate Art’, Barry appears alongside Australian cabaret artist Meow Meow and the endlessly impressive talents of Aurora Orchestra, a British Chamber orchestra, led by Satu Vänskä.

With observations that have you chuckling from the moment he walks on stage, Humphries settles into an arm chair beside a gramophone, to narrate the action in his own inimitable style. He explains the origin of his passion for Weimar Cabaret, after he happened across a treasure trove of nearly-forgotten composers’ works in a Melbourne second hand book store as a teenager. I’ll refrain from spoiling the full story, you should hear it from the horse’s mouth. Since then, Humphries has been fascinated with the period’s cultural experimentalism, defiance and unique mix of classical music and jazz.

His glamorous side kick Meow Meow lives and breathes the music, bringing real character to each song despite the obvious language barrier. There’s a full translation in the programme and a careful lyrical balance between English and German, meaning the audience aren’t left feeling alienated. It’d have to be a significant personality (yes, bigger even than Madge) to steal the stage from Humphries and Meow Meow really does. A tour de force, injecting genuinely hilarious moments into sultry numbers, she possesses a powerful ability to hold the audience in the palm of her hand, seduced by her mighty talent and keen sense of fun.

Bravo the costume department for the flamboyant, luxurious and completely OTT outfit changes… and that was just Barry Humphries! The set design is a real treat for the eyes, too, transforming the Barbican Theatre to give the illusion of intimacy and plush velour surroundings you’d expect from a 1930s cabaret venue.

Performing several songs together, with a stand out comedy number in the second act, ‘Mausi’ from Viktoria und ihr Husar, Barry proves he’s still got the moves and the pair’s comic timing was faultless and I would run out of superlatives describing the orchestra’s collective prowess. Catch this strictly limited season while you can. You won’t be disappointed, possums, I promise.