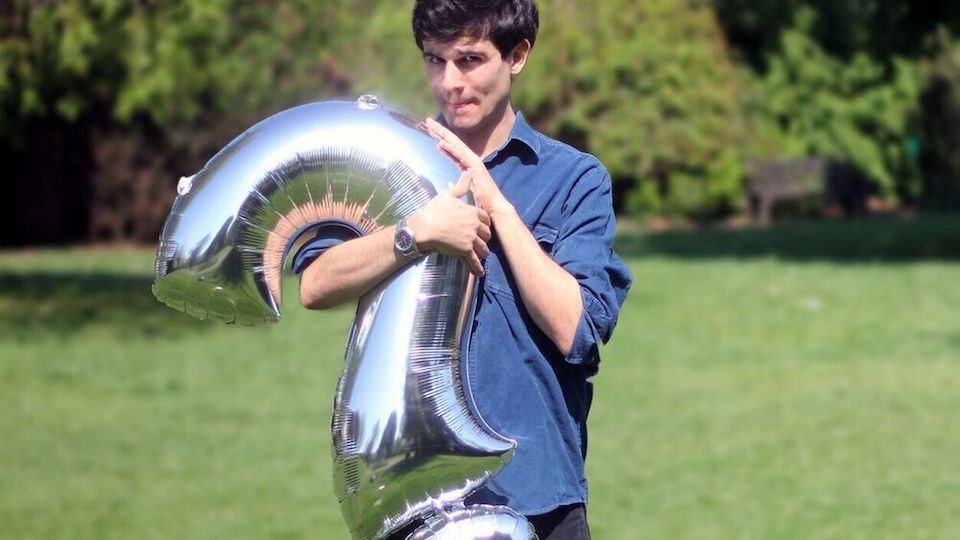 What is the magic formula for love? Rory O’Keeffe’s new Edinburgh show is inspired by ‘The 36 Questions’, a social experiment designed to find love.

Now somewhat of an expert in love and behavioural studies, Rory’s been writing apps with varied endings depending on the choices you make for TV shows like The X Factor and Love Island.

Every description of you seems to begin ‘young comedian’, how old are you now?

27, but I’m still ID-ed everywhere, even now. Who’s 17 and trying to buy a steak and a bottle of wine? This is my 5th solo show so I’ve learned a lot of things over the years I’ve been going to Edinburgh since my student days.

So what can we expect from ‘The 37th Question’?

It’s slightly different for me this year as it’s not a straight stand up show, it’s a comic storytelling show. It’s still very funny, I hope! It’s me telling the story of a couple called Stuart and Zoe who met doing the 36 questions, which was a psychological experiment in the 1990s where strangers asked each other the 36 questions and it made them fall in love. This went viral three years ago with a New York Times article that read ‘To Fall In Love With Anyone, Do This.’ So the fictional couple in the story met doing that and now, four years later, it’s about the next question. How do you really know someone? There’s also another element to it where the audience chooses what will happen. That’s inspired by me writing for some interactive fiction app stories but it’s all about the illusion of choice.

So it will it be a raise your hand vote for the crowd?

Yes, I don’t want people to think it’s going to be a show where I’ll drag anyone on stage. It will be a democratic decision for the whole audience to decide.

Then we’ll campaign for a second referendum! It’ll be endless. We did have it in a preview where it was literally 50/50 so I had to do a recount.

That’s pressure on the spot! Hope for no walk-outs!

Haha, yes but I suppose the fewer there are, then it’ll be easier to count… not that I want that!

There will be different endings then?

Yes, ultimately it’ll be three endings to choose from.

So people can come back and orchestrate the happy or sad ending?

Yes, that’s the business model, if you’re furious with the happy ending then you can come back and enforce misery on the crowd by voting for another.

What made you venture into a Storytelling approach rather than stand up?

I like to keep it fresh and it’s nice to have this challenge. I had the idea for a while and thought maybe it’ll work as a short story but then I thought some of my favourite comedians do storytelling shows, like Sarah Kendall and Daniel Kitson. I’ve always wanted to try that genre. The fact I was writing an app for a predominantly teenage female audience made me think I should try and write a choice-based narrative but for comedy audiences.

Have you figured out the answers to all 36 questions for the couple?

Well, you only get about 12 answers in the show which my uncle was very angry about, actually. He said I have to make it clear you don’t get all 36 answers. We’d be there forever if we did all 36!

Have you yourself tried this to find love?

My girlfriend and I have thought we should try but we haven’t as yet. Some of them are quite hard to answer. It’s quite depressing, actually, a lot of them are about death. It starts off with ‘Who’s your fantasy dinner party guest?’ or ‘What’s your perfect date?’ Then it gets dark and asks for your most terrible memory. Then, you have to look into each other’s eyes at the end for 4 minutes.

Yes, it’s definitely a first date show. [Laughs] If someone meets at my show, falls in love, then gets married that’d be a successful Edinburgh.